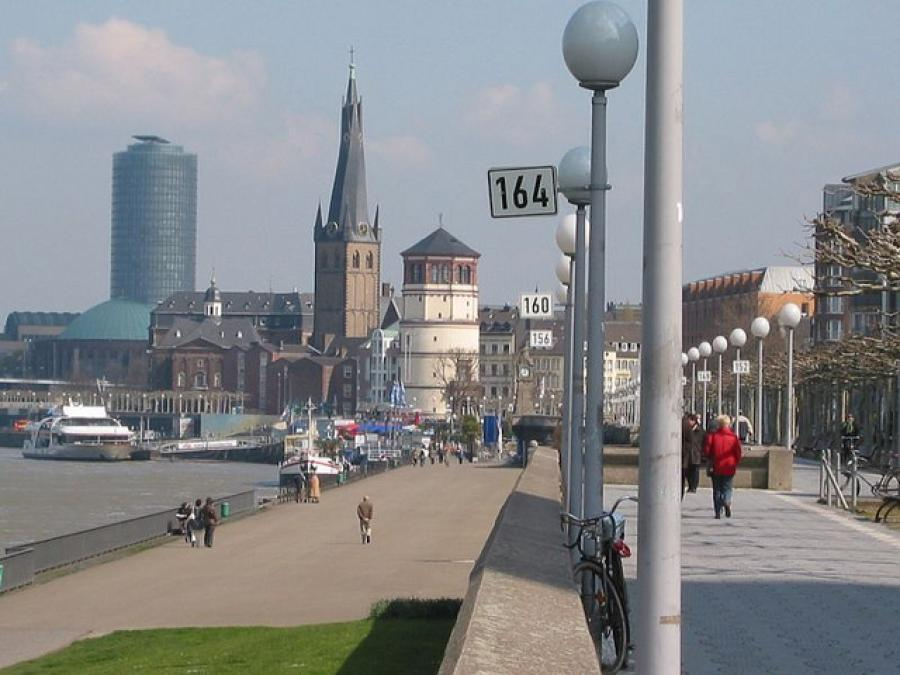 This article was written by Amy Ratcliffe, published on 23rd May 2013 and has been read 5046 times.

The Landeshauptstadt of Nordrhein-Westfalen, nestled on the banks of the Rhein, hasn’t disappointed me once over the course of this year. From the sleek high-fashion of Königsallee to the bustling alcohol-fuelled atmosphere of the Altstadt; Düsseldorf is one of the most elegant yet diverse cosmopolitan cities I’ve visited. As a newly self-christened Altbier-swilling, Schweinehaxe-chomping local, Düsseldorf will forever have a special place in my heart. This is why I have selflessly volunteered to be the Düsseldorf Mole as I now believe it to be my duty to spread the love for this beautiful City.

Düsseldorf is predominantly served by the Düsseldorf international airport which is based just a short 10 minute train and an always exciting Skytrain ride from the Hauptbahnhof. Dusseldorf is also supposedly served by the additional airport Düsseldorf-Weeze. I initially flew from the UK to this airport under the foolish pretence that it was close to Düsseldorf, it wasn’t. This combined with the awful transport connections added an extra two hours to my first journey in Germany. It was incredibly stressful, so if you hadn’t already guessed, don’t fly to Weeze airport. Just don’t.

Gallivanting around Düsseldorf and beyond!

Düsseldorf is great for public transport with buses, trams, trains and the underground on offer and running until late and restarting early (only with an hour break at weekends) thus making it perfect to go out in Dusseldorf. Most RE trains (regional) also run through Düsseldorf, making cities such as Köln, Aachen and Essen easily accessible and in terms of Köln, only half an hour away!

As a language assistant, I was also eligible to register at the local university, which with the Heinrich-Heine Üniversität was a long and difficult process. This massive struggle was worth it though, simply for the hallowed Semesterticket. For the price of €230 per Semester, you get unlimited free travel (not on IC/ICE trains though) all around NRW and the opportunity to be a Gasthörer at university lectures, join the Erasmus society, use the Uni gym and attend ‘Deutsch als Fremdsprache’ courses.

Now it’s time for the important information; Food. Since my year abroad has simply just been a glorified tour of the many dining and drinking establishments in Düsseldorf; I have declared myself to be an expert in this field. So much so, after this year I think I’ll need to be rolled home…preferably in a Brötchen.

1. Schweine James
Pork, potato and sauerkraut. You can’t go wrong with this typical, filling yet delicious German meal. Having extensively judged the best provider of which with the other language assistants, the winner is Schweine James. Located on the main Altstadt street, Schweine James is so small that it can easily be overlooked amongst the hustle and bustle. Always fronted with a rotating Schweinehaxe Rotisserie and a constantly jolly Robin Williams look-a-like, who never fails to deliver more crackling to pleading English girls; this place is a cheap gem.

2. Im Fuchschen – Ratinger Strasse
For a more authentic German dining experience, I fully recommend ‘Im Fuchsen’ which is a Brauerei specialising in the traditional beer of Düsseldorf; ‘Alt’. They brew it on site and it is widely claimed to be one of the best ‘Alt’s (if not the best!) in the area. The Schweinehaxe here is as big as a human head and comes served with a knife sticking out of an armour of crackling. It’s the meat equivalent of the sword in the stone. Unfortunately after demolishing the whole dish, you won’t become King; instead you’ll just be left with one mega meat hangover. So worth it though.

3. Japanese district – Near Oststrasse
Dusseldorf is home to Germany’s biggest Japanese expat community, so much so that they are even celebrated with the yearly Japantag in May. For foodies though, this provides an alternative to the over-whelming Düsseldorf meat-fest with a huge array of amazing and authentic Japanese cuisine and grocery stores.

The main nightlife is centred round the Altstadt with the ‘longest bar in the world’ which is in fact a whole street! The amount of drinking establishments here is incredible and whether you fancy a good old Alt or a cheeky cocktail, you are spoilt for choice with the Altstadt. I particularly recommend Mai Tai on Hunsrückenstraße which offers hundreds of cocktails but with very vague descriptions, so the excitement is in the surprise. In terms of clubbing, go to the Altstadt or Ratinger Strasse for Mauer and Schlösser Quartier Bohème, or if you want somewhere ‘fancier’, then venture to Nachtresidenz. One of the best clubbing experiences in Europe, they regularly hold special parties, for example I once got free Chinese, frozen yoghurt and won a pair of shoes from there, all in one night! Score!

Germany loves a good Feiertag. Düsseldorf in particular is famed for its Karneval celebrations where 5 dreary February days are filled with hordes of costume-clad drunken Düsseldorfer revellers and countless parties and parades. From the crazy jester jumping out of the mustard pot to the shameless disregard of moral values for the free chocolate thrown out at the Rosenmontag parade; Karneval is an unforgettable experience.
If visiting Düsseldorf at Christmas time, you absolutely cannot miss the Christmas markets which run throughout the whole of December. A definite must see, even if it is to get suitably merry from the Glühwein!

1. Coordinate your day off with other assistants in the area!

This allows you all to meet up on a Thursday evening and take long weekends.

Take long weekend trips abroad and through Germany. Got to love the huge amount of free time and being situated on mainland Europe!

3. Persevere in German, even if people reply in English!

That moment when the Barista at Starbucks replies in German is so worthwhile, even if, like me, it takes 6 months to get to that stage.

Record your year abroad! It’s a great way to reflect upon your experiences and also keep in touch with family and friends back home.

It’s a tough experience being alone in a new country but say ‘yes’ to everything. Clichéd but true.

Considering that I now categorise my life as pre-year abroad and post-year abroad, it’s an understatement to say that I’ve had an amazing time in Düsseldorf. With such a diverse city, I’ve never failed to find new places in which to explore, shop and eat and I will miss it immensely. This year abroad has been the best year of my life and I am incredibly jealous of all those who are about to embark on their own adventures very soon.