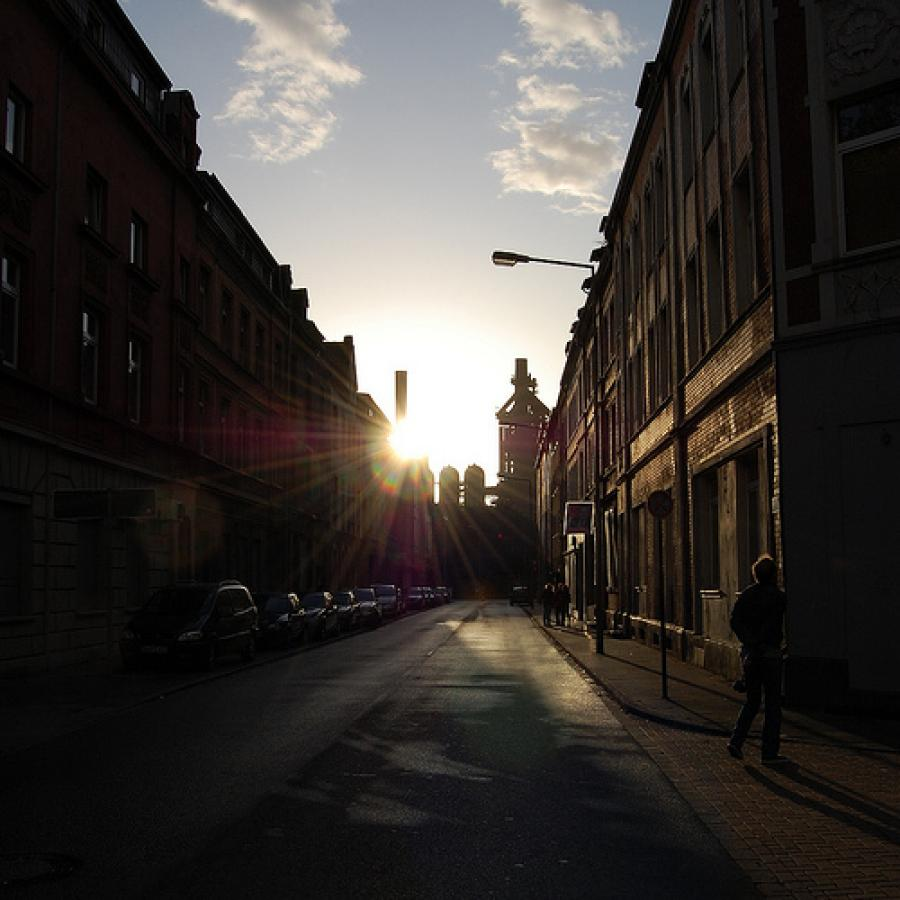 This article was written by Georgina Beardmore, published on 7th September 2011 and has been read 7343 times.

Living and working in Germany Mole Diaries Sheffield Uni Duisburg Germany
Georgina Beardmore is a Sheffield Uni student and has just come back from her year abroad in Duisburg, Germany. Here, she gives her account of how it went, with her top places to go and visit whilst you're there...

So you’ve just found out you’re going to be spending some time in Duisburg, Nordrhein-Westfalen, Germany. Don’t worry, before my year abroad, I hadn’t heard of it either. However, after several months of living local, I’ve managed to collect lots of handy hints and tips that will hopefully help your year abroad in the heart of the Ruhrgebeit run smoothly.

The City and the Sights

I’ll level with you. Duisburg is not very pretty. In fact, it’s a bit block-ish and industrial. You mustn’t hold that against it though; just because it ain’t good-looking doesn’t mean you can’t have an absolute blast there.

The main city centre runs from the Hauptbahnhof up Konigstraße to the Rathouse. It’s this street where you’ll find all the shops and banks, as well as two large shopping centres (the Forum and the City Palais, which is also home to a concert hall, several restaurants and a casino) and the Duisburg Theatre. They also hold the (quite impressive) Christmas Market here: keep your eye out for the full-size sailing boat serving hot Glühwein. There are also at least 6 fountains of varying sizes, the most famous of these being the Lifesaver Statue, a colourful revolving bird, which is either very artistic or very weird depending on your point of view.

If you take a left at the Lifesaver Statue and walk to the end of the street, you’ll come to a large park which is ideal in summer for relaxing in the sunshine with a picnic or a beer. Behind it is a large sculpture museum which, for the artists amongst you, is an enjoyable way to while away a few hours. There’s another interesting sculpture at the entrance to the park too, which I can’t describe for censorship reasons – but make sure you check it out, it’s a good laugh.

The other area of town worth a look is the Innenhafen, which is full of lovely bars and restaurants and an excellent place to go for a quiet meal and a few drinks. It’s fairly easy to find: if you continue in a straight line past the Rathaus (pause to look at excavated medieval house here, it’s quite interesting) and turn right just before the bridge, it’s about a 10 minute walk along the Ruhr. On the way, you’ll pass the Kultur und Stadthistorisches Museum, which is alright if you’re a fan of industrial history, and you’ll get to another nice park and the old city walls. Down here you’ll also find the Legoland Discovery Centre, the entrance of which is dominated by the larger-than-life Lego giraffe that crops up on all the Duisburg postcards.

The Universität Duisburg-Essen is a large modern university with some 30,000 students, many of whom are international, making the city’s student vibe wonderfully multi-cultural. The university buildings are somewhat dotted about, but the main centre is on Lotharstraße, about a 20 minute walk from the Hauptbahnhof in the opposite direction to the city centre. Here you’ll find the majority of the departments, the Info Centre, the main canteen (Mensa) and the gym (completely unrelated to the university, it’s also around this area that the large and reasonably famous Duisburg Zoo is located).

There is a large international students society run by students which runs regular Stammtisches and trips (sometimes even trips abroad – whilst I was there they ran a day trip to Paris for 40 Euros). You don’t even have to be a student at the university to be involved; they are happy to welcome any international students and the Stammtisches in particular are an excellent way to meet people in the area whilst practising your language skills.

Your first and best option for finding accommodation in Duisburg is to apply for the non-university Studentenwohnheim on Dellplatz. This is cheap, sociable and easy walking distance from the city centre and the Hauptbahnhof. It is in the style of a traditional hall of residence, with individual rooms and a large shared kitchen, which is kept meticulously clean. It is popular with a large number of young working Germans and students as well as internationals and there is even a (very cheep) bar downstairs on Wednesday nights. Alternatively, it is possible to apply for university student accommodation. They have a large number of Studentenwohnheims available for students and non-students (non-students have to pay and additional guest fee of 20 Euros per month), usually in the form of shared flats. This is also a very cheap option, but if you want to live with Germans then your chances are slim as the majority of inhabitants will be international students. Most of the Studentenwohnheims are located in Neudorf, just behind the Hauptbahnhof, which is a popular student area.

Duisburg, like the majority of German cities, has a very good U-Bahn network. The 901 route is the one you’ll probably use most as a student as it connects the university to the Hauptbahnhof, as well as linking Duisburg to the neighbouring city of Mülheim-an-der-Ruhr. In terms of trains, Duisburg is very well connected and it is possible to get a direct regional train to almost anywhere within Nordrhein-Westfalen, as well as to many exciting places further afield, such as Berlin, Amsterdam and Copenhagen.

If you plan to do a lot of travelling within Nordrhein-Westfalen (as I did) and you are not already a student at the university, I highly recommend you enrol. It is 215 Euros per semester and for this you will be issued with a Semesterticket entitling you to unlimited travel on regional transport (U-Bahn, buses and RE/RB/ S-Bahn trains).  You can even take a friend on your ticket if it is after 7PM. To get one you have to go the AAA Office (located on the ground floor of a large university building on Geibelstraße) where they will make you fill out lots of forms and confuse you with insurance questions (make sure you take your passport and two passport photos with you). If anyone tells you that you are not permitted to enrol (they don’t seem to communicate information too well between staff) then persevere because they are talking nonsense. This may sound like a lot of faff, but it is thoroughly worth it for the amount of money you save on travel.

There are innumerable places to eat, drink and be merry in Duisburg. Here are a few of my favourites.
Restaurants

Bodega: Located in the Innenhafen, this place does the best tapas outside of Espania as well as first-rate cocktails. Make sure you try the garlic marinated chicken; you won’t be kissing anyone for a while but it tastes like heaven. Brauhaus Schacht 4/8: Smack bang in the middle of the city centre, excellent beer and schnitzel as big as your face. Nuh’s Thai: Eat in or takeaway, some of the best value and best tasting Thai food in the region.

I have no idea what it’s called, but the little bar on the corner off Dellstraße and Krummacherstraße is a really good place to have a quiet beer and hang out. Pianissimo: A nice pub, often with live music. Generally the location of the International Students’ Stammtisch. Steinbruch: A café-come-bar which doubles up as a gig venue. It’s quite a walk to get to it, so I recommend you get a taxi or use the shuttle bus from the Hauptbahnhof that runs on gig nights. Golden Grün: You can go early to drink and chat, or late to drink and dance. Tiny and lots of fun.

Pulp: On the 903 tram route and located in an old castle, this is Duisburg’s best club. The nights vary from hard rock to indie to mainstream, but its always got a friendly party atmosphere. DeJazz: This is a city centre club in a residential area so it tends to close a bit earlier than the standard German 6AM. However, it’s a brilliant night with an eclectic mix of music, often live. Hundertmeister: This is the place to go if you want a nice normal night out with a good mix of music. The monthly Yum-Yum parties are legendary, but the queue to get in will be enormous. Also a nice place to sit outside in the summer with a crafty half of Duisburg’s local König Pilsner.

Hidden Gem
Duisburg does have a normal cinema just next to the Hauptbahnhof, but if you fancy a bit of class to your film viewing, check out the Film Forum just off Dellplatz, an old theatre that’s been converted into a cinema. It’s a fantastic place to enjoy arty and foreign films, as well as more mainstream ones and if you fancy something to eat before hand, there’s a restaurant downstairs that’s always packed.

There may be lots to do in Duisburg, but it would be sad if you spent your entire year without exploring all that NRW has to offer. Here are 3 of my top places to visit if you fancy travelling a little outside the city limits.

Centro: Located in Oberhausen’s Neumitte (you can get a bus or tram there from Oberhausen Hauptbahnhof, which itself is only 5 minutes on the train from Duisburg), this is a large out-of-town shopping centre complete with a bar and restaurant promenade. Pretty much every shop you will ever need in Germany under one roof.
Düsseldorf: It’s the capital of the region and just 15 minutes away on the train. Good for high-end shopping and full of interesting museums, and also a fantastic place for a night out. The majority of the bars are located in the Altstadt – check out Engelchen on Kurzestraße for a traditional German Kneipe and Zum Goldenen Einhorn on Rattingerstraße (the student street) for some traditional German grub. The cinema next to the Hauptbahnhof often screens new Hollywood releases in English – look out for screenings captioned “OV”.
Münster: Welcome to NRW’s poshest city. It’s a long journey to get there (about an hour and 20 minutes by train), but wandering around its cobbled streets is a very pleasant way to spend a day. The Christmas Market (or should I say markets, as they have 6) is probably one of the best in the region.

And that’s Duisburg, folks. I wish you all the best with your year abroad; if you enjoy it half as much as I did, you’re in for a real treat. Have fun and good luck!

by Mike Winnington
Living and working in Germany