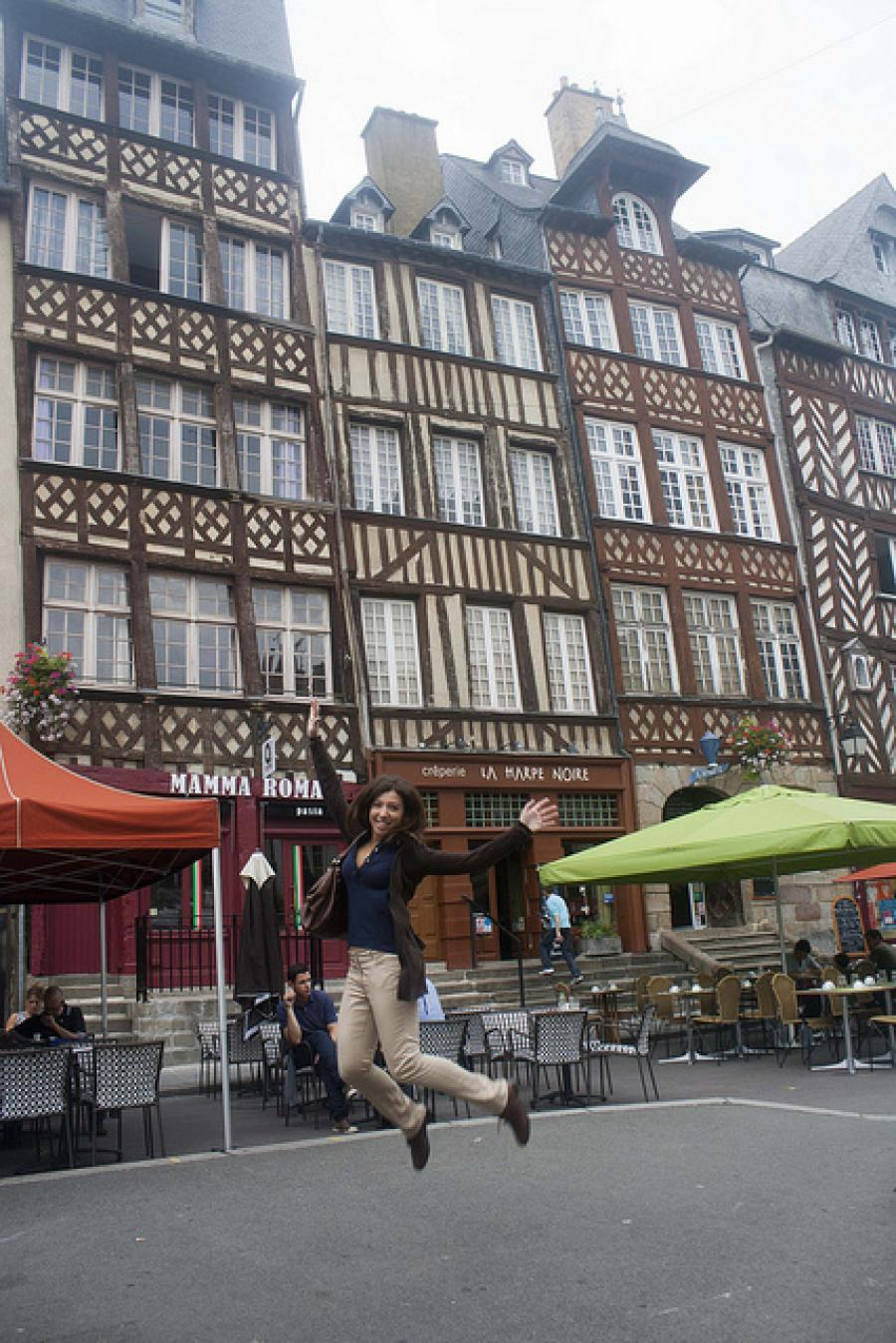 This article was written by Francesca Gillett, published on 26th February 2012 and has been read 6522 times.

Francesca is studying French and Theology at Exeter, and is spending her year abroad in Brittany, France, as a British Council Language Assistant, teaching English to primary school and high school students. Here she passes on her top tips about food, transport, accommodation and the best places to visit while you're there.

Rich in history and with a beautiful landscape to match, Bretagne in north-west France is a wonderful place to spend your year abroad. Its stunning and extensive coastline, coupled with small, medieval towns and lively cities means that there’s always somewhere to visit. And unlike other regions of France, you’ll get two for the price of one on culture; as well as the traditional French aspects, Bretagne is fiercely proud of its own identity and the unique Breton language, music and cuisine is widely celebrated.

TER Bretagne is the regional rail network which provides regular trains to and from the major towns, as well as the famous, high-speed TGV trains which dart across the region. It’s perhaps worth considering buying a 12-25 Carte which, for a one-off payment of €28, handily offers discounts on all journeys across France.

In the larger cities, such as Rennes, the efficient metro service is a quick way to travel, as well as a wealth of bus lines. Compared to my experiences of the UK, inner-city travel is relatively cheap - there's even a free bus service in the town of Vitré, east of Rennes.

Thanks to the stretch of coastline which winds its way around Bretagne, fish and seafood are particular highlights. There are excellent fish restaurants aplenty and moules-frites is a popular dish. Head to the northern town of Cancale which prides itself on its oysters, claimed to have been taken daily to Versailles for Louis XIV and even accompanied Napoleon on his march to Moscow. Coquille St Jacques, or scallops, are another Breton delicacy which seem to crop up on every restaurant menu and are well worth a try.

No Breton town is complete without its own crêperie, and both crêpes and galettes make popular meals. The main difference being in the type of flour used; crepes are usually sweeter whilst galettes, made with darker flour, are filled with anything from egg, ham and cheese to artichokes and snails. Often eaten on-the-go or at football matches, a galette saucisse is a delicious and popular alternative to fast-food, and comprises a sausage wrapped up tightly in a galette and adorned with a choice of sauce; simple but tasty.

Baked with only butter and sugar, Kouign Amann is the traditional cake of Bretagne and makes a perfect gift to bring back to the UK. Able to buy in supermarkets or Breton speciality shops, it offers a simpler alternative to the array of mouth-watering patisseries and tarts available at any local bakery.

There are many options for accommodation, both in larger cities and smaller towns. It is perhaps worth checking out where the nearest ‘Foyer des Jeunes Travailleurs’ are; these are cheap, student- style halls for young people of all professions, and come with all the basic amenities. Check out CROUS, the leading provider of halls of residence in university towns, if you fancy living with students, or of course there are always plenty of estate agents willing to help you find somewhere to rent.

Despite its grizzly English-style weather, Bretagne’s beauty and wealth of places to visit have secured it as a region popular with tourists. Cited as the most recognisable French silhouette apart from the Eiffel Tower, Mont St Michel on the Bretagne/Normandie border is absolutely breathtaking. Ascending the abbey on a clear day will bring spectacular views, and the serene atmosphere and interesting history are equally worth a visit.

Further along the northern coast is St Malo and Dinan, two beautiful seaside towns. Just outside of St Malo is Cancale, the town famous for oysters where you can pick up a plate for lunch very cheaply. On the south coast, the large cities of Vannes and Quimper have equally beautiful and traditional historical centres as well as picturesque ports along which an enjoyable walk can be had. The fish market at Vannes, as with many in the seafood-prolific region, is particularly worth going to if you’re a fan.

Inland, the Rennes-Brest canal runs from, well, Rennes to the city of Brest on the Western coast, and is extremely picturesque with its many locks. If you’re lucky enough to have access to a car, there are many small villages along the canal such as Hédé where you can park up and enjoy a country walk along the waterway. Alternatively, the canal runs through the town of Redon, which is served by an SNCF rail station.

Small medieval towns such as St Brieuc and Vitré make for a relaxing day trips, where you can meander around the markets, museums, castles and cathedrals and stop off for a light lunch in one of the many French brasseries. In the larger cities, such as Rennes, there is a vibrant café culture, and in the daytime the squares are filled with groups of people, often students, casually drinking and chatting.

Rennes, the capital of Bretagne, is well worth moseying around. The imposing Place de la Republique and Place de Parliament are stunningly grand, and there are quaint but busy streets to wander around, including the amusingly named Rue le Bastard. The Musee des Beaux Arts and Les Champs Libres are both interesting, with the latter hosting a range of varied expeditions throughout the year. To eat, head to the Place de Sainte Anne (La Creperie de Sainte Anne is particularly good for the traditional Breton crepes and galettes), or Rue Vasselot south of the river. A city of students, the Rennes nightlife is buzzing and the aptly named ‘Rue de la Soif’ (Rue St Michel), the equivalent of Magaluf’s ‘The Strip’ I’ve been told, is the place to head after dark. Transport-wise, there’s a free bicycle system in the city, the metro is relatively cheap and the extensive bus services run all over the city.

Check out Francesca's blog, Frannie Antoinette, for her latest updates from Brittany...