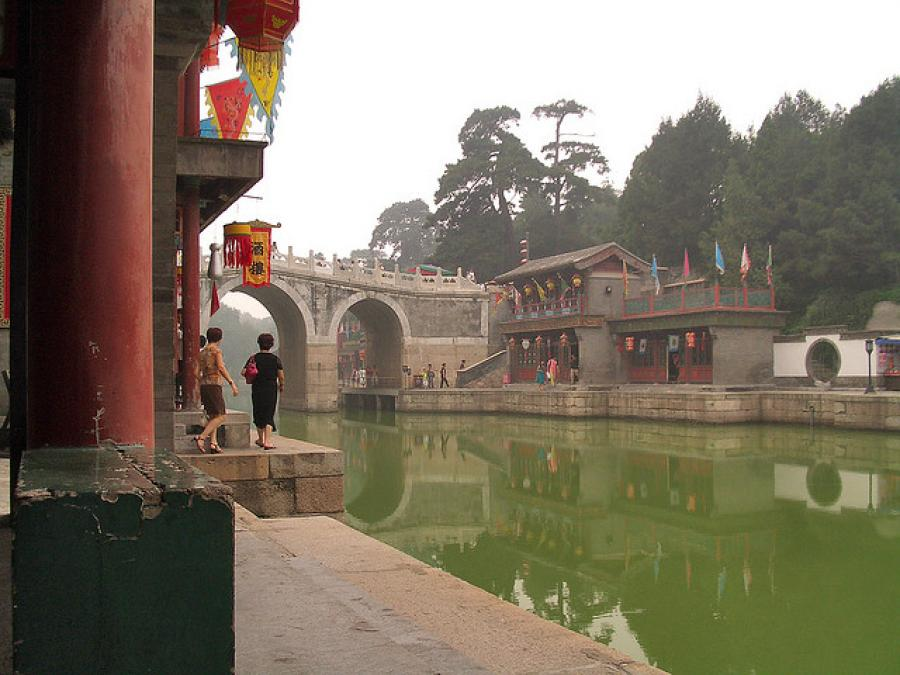 This article was written by Victoria Leigh, published on 5th September 2012 and has been read 6021 times.

China Chinese Beijing Mole Diaries
Victoria is 24, studies Mandarin Chinese at Leeds University and spent her Year Abroad studying at Capital Normal University in Haidian District, Beijing. She chose Beijing as it is the historical and cultural centre of China, and also because it is the city where the Chinese spoken there is the same standard dialect that is studied in Leeds. Here, she passes on her advice about all things accommodation, travel, shopping and nightlife...
Imagine, if you will, a land where the life and culture revolves around food, shopping prices are negotiable and a crazy night out costs less than £10. You can? Good. Welcome to Beijing – 北京欢迎你。

When you arrive at Capital Normal, you will start off with the most convenient accommodation option: the dormitory. Clean, and room for most of your stuff – though they do have storage. Chances are unless you’re feeling flash you will have to share with two or three other people, so either be prepared to make new foreign friends (and improve your Chinese at the same time – bonus!) or bunk in with friends, which always makes the settling in stage that bit less weird. I for one was not particularly homesick, but some were. Skype comes into use at that point! A point worth noting is that although classes start at 8am, you live in the same building where you study!
I personally chose to move out after finding a host family so I could speak Chinese with natives every day. It took a couple of months to find, but so worth it, as you may not get the chance again! I picked up some stuff from my family and had a genuine Chinese experience that not many others did, which I’m grateful for, and so happy I took that chance. The rent I paid included one meal a day, internet and bills, so I never had to worry about that.

If you don’t conveniently live near a subway station, as was in our case, you will have to take a bus or taxi to the nearest one – never pleasant in Beijing rush hour. Buses are so cheap, if you have a subway card (which I fully recommend the purchase of) the bus fare is 4p, yes 4p one way to pretty much anywhere in the city. Then the subway is a further 30p per journey. Crazy prices. Once the public transport stops running around 11pm, you can always grab a taxi, which will set you back a further £3 or £4, and that shared between friends isn’t bad at all! Just be careful of the ‘heiche’ – black cabs which run without a meter and without doubt will try and rip you off if you’re not careful. Safe enough but with these guys, always agree a price beforehand.

Trains between other provinces are dirt cheap as well – Beijing to Chengdu down south, a 24 hour trip one way on a hard seat, will set you back £15, and a sore bum. But a cheap sore bum! Foreigners need passports in order to buy train tickets, so don’t forget.

Ah yes. The Great Wall is one of the greatest wonders you will ever see on this earth. Breath-taking. Capital Normal organised a trip for us so I recommend going on a school-organised trip which I hear most do. The Mutianyu part even has a cable-car and a toboggan ride! Aside from the Ming Tombs, it is pretty far out of the city, unlike the remainder of the main tourist attractions.

Other central attractions include The Forbidden City, Tiananmen Square, Qianmen Shopping Street and the sadly ever-decreasing hutongs. Bring your Chinese student pass and get a student discount on admission, which usually is a pretty hefty discount. Avoid like the plague on public holidays, unless you get a kick out of humungous, suffocating crowds.

If there’s one thing China is proud of, bar its ‘long history’, it is its food. All the regions have their own cuisine, and you can find a lot of it in Beijing. In fact you can find various international cuisines in Beijing, from British to Peruvian to Korean. And it’s all delicious. Should you choose to meet with Chinese friends, don’t be surprised if they often ‘treat you’ to your meal. Don’t worry, they’re not trying to make you uncomfortable or anything, they’re genuinely treating you and it’s just their way of being friendly and welcoming.

Famous Beijing specialities are baozi and jiaozi – dumplings with various savoury fillings - my absolute favourite - and disanxian, which comprises of pepper, aubergine and potato in soy sauce. Fabulous!

The canteen food isn’t for those who have an aversion to vegetables or rice, however for 40p a meal you get great value for money! It’s quite difficult to cook in the dorm, as there is only a hot water machine in the kitchen, so you will have to get used to eating out unless you buy a rice cooker, amongst other devices, which according to a friend cooks everything known to man.

Vegetarians/vegans will have to be vigil. Most Chinese people cannot comprehend such eating habits as eating meat is just so ingrained with the culture. Obviously it is easy to obtain cooked vegetables in restaurants, just watch out for the diced pork that often comes plopped on top of it. That said, the Chinese do love their fruit and veg (dairy not so much) so it’s not difficult to find vegetable-only dishes. Most menus have photos of the dishes to aid your selection of dishes.

No underage drinking in China, because there is no minimum age! Drinking alcohol to the point of getting paralytic is not really part of Chinese culture, so you will mainly see foreigners buying/drinking alcohol, and it can be amazingly inexpensive: Korean rice wine (soju) does the job and is only £1.70 a bottle! Which leads nicely on to…
Nightlife

There are two main bar districts which, naturally, are frequented by many foreigners. Sanlitun is the embassy district where lots of pricey bars reside, along with very pricey shopping. However, Wudaokou on the other side of town is the student bar area. There, amongst others, you can find two nightclubs, namely Propaganda and Sensation, that on Wednesdays offer girls £3/boys £5 open bar. Yes, you read that right. Messy times will be had, I warn you now. Otherwise, beer comes at £1 or so a bottle, and cocktails can be a little costly in most places.

If you are not shopping in malls and shopping centres and can deal with clothes not being of a particularly high quality, Beijing shopping offers a lot. Wangfujing offers C&A (which I thought was liquidated years ago, but no, it’s alive and well in China) amongst others for New Look/H&M type prices. Then Xidan for lots of kooky Korean style clothes and accessories, most of which prices are negotiable. Then the Silk Market – a market that starts in a subway station! – offers lots of fake designer sportswear, designer pieces and shoes, plus lots of cutesy Chinese souvenirs. All of it is negotiable price-wise. £10 for a fake Manchester United shirt anyone?

Communism and all that jazz

Due to the hard-line Communist stance of the country, aspects of life we take for granted in the West are not easily available in China, such as Facebook, Youtube, decent internet and general democratic freedom, as it were. Download a VPN (Virtual Private Network) beforehand, or even when you get there if you can find an accessible one so you can at least try and access Facebook. The official governmental ‘organs’ are not easily dealt with, should you encounter them and you will find that bureaucratically speaking, things are in general chaos, nobody knows anything about anything and that whatever it is, it is always somebody else’s responsibility!

Be patient. In all aspects of life. People will stare, it will be hard to get across what you need at times, and of course linguistically and culturally speaking, there is ‘Chinese logic’ to contend with. For example: why is the train ticket office open and the queue so long, but only one cashier working a shift? Why can’t they serve the dishes we ordered at the same time? Why do the taxi drivers drive straight past me? Is it because I’m foreign? Patience and open-mindedness are virtues in China, and you will be tested. And I implore you, don’t be afraid to speak Chinese! Therein holds the key to improving your level of this addictively impossible language.