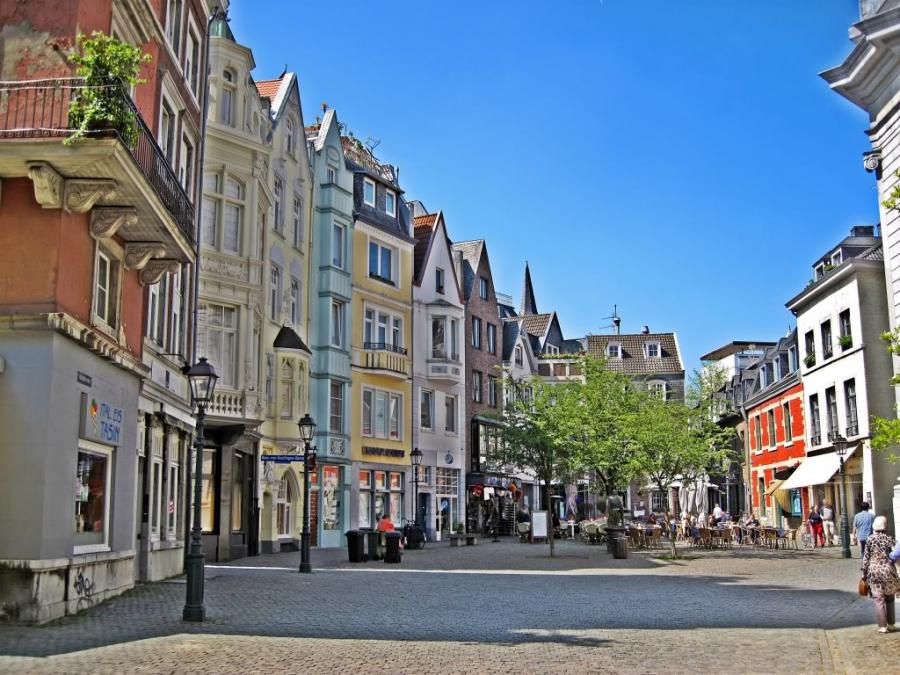 Mole Diaries Language Assistant Leeds Uni Aachen Germany
Jade is studying French and German at the University of Leeds, and is currently in the last month of her British Council placement in Aachen, Germany. Here is her insider guide to the city, including advice on sights to see, what to do, travel opportunities, ease of access to the city, the weather, shopping and social scene in Aachen.

Aachen is a small but beautiful city located in the North-Rhine Westphalia region of Germany, right on the border with the Netherlands and Belgium. It is the westernmost city in the country and has a population of nearly 260,000 people, of which 40,000 are students attending one of Aachen’s four major colleges and universities. It is located in the former coal mining region – perhaps the reason behind its long economic history and its reputation as a forerunner in the domains of science and engineering. 41km south-west of Cologne, this city was the favoured residence of the infamous Charlemagne and was later the site of the coronations of the kings of Germany.

Arriving in Aachen
Situated close to the major cities of Cologne (around a 50-minute train journey) and Düsseldorf (around an hour and a half away), there are ample opportunities to find good connecting flights from the UK to either of these major airports throughout the year. In peak tourist season (around the time of the Christmas Markets and throughout the summer), budget flights by Ryanair can also be found to Maastricht airport in the neighbouring Netherlands (around a 30-minute drive from the city centre).

Travelling within Aachen
Getting around the city itself presents very little problems, with a usually reliable bus service that runs various routes across the city, mainly serving to bring students to and from the RWTH university campus. Given the size and layout of the city centre however, it is likely that you will find that you have no need for public transport and can in fact, should you so wish, manage to make most journeys by foot.

Travelling
In terms of travel opportunities, you could not wish for a better place to spend your year abroad than in this incredible city. Located in one of the biggest Bundesländer in Germany, there are numerous large and exciting cities in the vicinity which, should you choose to take advantage of the Semester Ticket provided by the local university, are actually free to get to (bearing in mind you use local trains). Getting your hands on one of these tickets could not be easier – simply fill out an application form for the university, pretend you are going to actually attend some classes, pay your 230 euros (which is more than worth it, believe me), and the region is your oyster! Another advantage of this ticket is that you can take a friend for free on buses and trains in the local area after 7pm and on a weekend – perfect if you have visitors from home! Thinking slightly further afield, there are regular buses in and out of the Netherlands, various train connections to Belgium, and even the chance to be in Paris or Amsterdam within 2-3 hours.

What to do and see

The city centre of Aachen is without doubt one of the most beautiful sights you could wish to experience. Built around the Gothic Cathedral that is said to be home to the remains of Charlemagne, and also the first monument in Germany to be included on the UNESCO Cultural Heritage list, the surrounding cobbled streets are home to many small boutique shops selling traditional Aachen goods (including the famous spiced biscuit – Printen), and cafes providing traditional German ‘Kaffee und Kuchen’. The square situated at the top of the Old Town is home to the city hall: an impressively large and architecturally breath-taking building in whose shadow you can sit and sip a cocktail in the sun.

One ‘must see’ is the ‘Dreiländereck’ (literally ‘3 country corner’), situated at the meeting point of Germany, the Netherlands and Belgium – if you are clever, you can have a photo of you stood in all 3 at once! Also not to be missed are the Karneval celebrations which take place around the region (mainly in February) – never again will you get the chance to wander round in a ridiculous costume drinking beer at 9 in the morning and still manage to blend in! This festival - that officially begins at 11.11am on the 11th November and carries on for 4 months (?!) - is like nothing I have ever experienced in my life and I only wish I had previously had the chance to parade around Cologne dressed as Ginger Spice – Union Jack dress, orange wig and all…

Eating out and socialising

If you are looking for a place where you can find all types of cuisine then Aachen is the ideal city for you! From the very traditional ‘Rose am Dom’ restaurant located in the heart of the Old Town that serves traditional (and delicious) German food for a surprisingly reasonable price to the all-you-can-eat Mexican, Pizza, Pasta and Cocktail specialists, ‘Nudeln und Co’ (€8.99 for the food and cocktails from €3.33 during Happy Hour), there is something here for everyone. Visit Vapiano’s Italian restaurant for the chance to see your food being made freshly right in front of you or, if you fancy something sweet, call in at the very first cupcake café ‘Cuperella’ located just on the edge of the city centre.

In terms of socialising, there are a multitude of bars, clubs and cocktails bars – mostly located in the Pontstrasse area around the university – that are all very reasonably priced. If you get chance, you must pay a visit to 90s night at the Apollo nightclub – without doubt one of the best nights out in Aachen!

Although Aachen does have its own shopping centre located in the suburb of Rothe Erde, in the city centre opportunities for a spot of retail therapy are quite thin on the ground. Without doubt you can find all the essentials for your daily life but, should you want to abuse your credit card, you would probably want to take the train to one of the nearby cities of Cologne or Düsseldorf. Come December however, and the Old Town is transformed into one of the most beautiful Christmas markets in the region where you can buy any form of traditional German goods, food, drink, and gifts you would never have imagined even existed. Should you plan a visit, December is without doubt the best time to do so – the town is packed with life, the Old Town is lit up with fairy lights and furnished with traditional log cabins, and the smell of Mulled Wine, sugar and mixed spices creates an incredible aroma that really is Christmas personified.

Given that Germany has just experienced its coldest winter for more than 50 years, it may be slightly unfair to make comments on how cold the Christmas season can be here. All I would say is make sure you pack enough layers to ensure that none of your body remains uncovered – the wind and temperature will make you feel as though your skin is burning! Happily though, because of the position of Aachen, summer here is meant to get much warmer on average than other parts of the region meaning you get the chance to make the most of the beautiful parks and outdoor eating areas that are in abundance throughout the city centre. Not to mention the numerous ice-cream cafes that seem to be on every street corner…

All-in-all, I could not have wished for a better place to spend my year abroad. Aachen is beautiful, traditional and very German but, at the same time, a place that is bursting with modernity and which has a real student vibe. The city is small enough for you to explore and feel as though you really know your way but large enough that you never run out of things to do and see. Anyone who gets the chance to live here – I am incredibly jealous. Leaving the place that will have been my home for 9 months is a thought that makes me incredibly sad but all I can say is thank you Aachen, simply for being amazing!