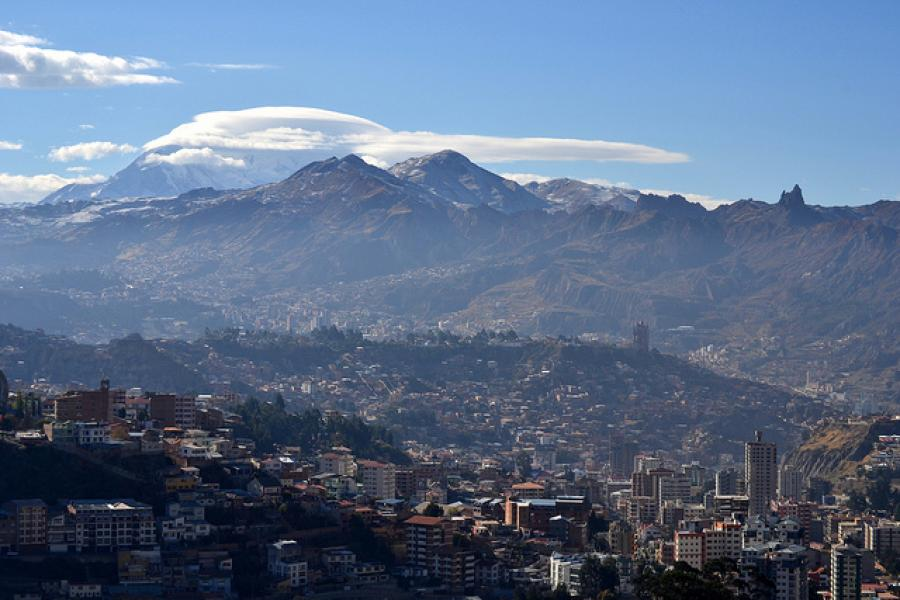 This article was written by Christy Callaway-Gale, published on 15th August 2014 and has been read 3595 times.

Work Abroad Mole Diaries Bolivia La Paz
Christy Callaway-Gale is a (soon to be) second year student at Oxford studying Spanish and Linguistics. She is currently working as an intern at the magazine Bolivian Express in La Paz, Bolivia.

Dazed from altitude and multiple long flights can leave you a little disorientated when arriving in La Paz, apart from the obvious “being in a new city” thing. Seriously, though, the altitude can cause issues for some at the beginning, La Paz being the highest capital city in the world. Personally, I was out of breath most of the time (a great ploy to avoid admitting being unfit is blaming the altitude) and my legs ached for the first few days.

Coca tea is a good way to combat altitude symptoms but if you’re really suffering, Sorojchi altitude pills are apparently also helpful. Some doctors will give you altitude medication before you depart but they can be easily acquired here if need be.

On a different note, make sure you have pre-arranged transport from the airport because in your altitudey-state you don’t want to have to worry about getting into an unofficial taxi by mistake.

I’m working at the magazine Bolivian Express, an English-speaking magazine that writes about all things Bolivian. Read our latest issue (issue 42) here.

Many of those who work permanently for the magazine are Bolivian and all speak Spanish and English (at least). Although the interns this month are predominantly from England, that is by no means a requirement. For this particular issue, the interns have been the sole article contributors, meaning this edition feels very much like our own: from having decided this month’s theme to what we would like to write about. Important to note is that the theme never limits but often gives an interesting angle to your desired topic. You also have scope to design your own images and have a say in the layout of your articles as each month comes to a close.

It is a special opportunity to work with professional editors and the expertise of those who run the magazine. They point you in the direction of great contacts, accompany you to interviews, if need be, and are there as a support network, as well as making the finished product cohesive.
Included each month are Spanish classes, photography classes, journalism classes and there is time to escape for a quick weekend away or for a slightly longer trip towards the end of the month if you fancy. Travelling and writing is also encouraged if something grabs your attention.

All the interns and some permanent magazine members live in a house in Sopocachi, so finding accommodation wasn’t an issue for me. Meetings often take place here and lunch is provided during the week too: added bonus!

In the city San Francisco: a large cathedral. Witches market, Sagarnaga: very close to San Francisco, which is complete with dried llama fetuses. Contemporary art museum on the Prado. There are lots of great museums around Plaza Murillo i.e. The Ethnographic Museum/ 3 Municipal Museums for 10 bolivianos.  Don’t forget to look up in Plaza Murillo itself to see the reloj del sur, which goes backwards (read the article in issue 42 of Bolivian Express to find out more). A church crawl around Plaza Murillo will satisfy any kitsch religious fetishes you may be harbouring.

Outside the City/ El Alto/ Wider Bolivia Valle de la luna: beautiful rock formations just outside the city centre (jump on a minibus to Mallasa/zoológico from San Francisco). Tiwanaku: Pre-historic ruins. Join a tour when you get there (make friends on the bus to split the cost), as otherwise you don’t really know what you’re looking at. el Alto: is the city just above La Paz and you may be forgiven for thinking it is part of La Paz, as there is no real “boundary”, as such, between the two. There is a teleférico that is an efficient way of reaching it and happens to also have stunning views. I’ve already been on it twice and I’ve only been here a month. On Sundays there is a great market selling pretty much anything: from buses to jumpers. The famous Cholita wrestling also takes place here on Sunday evenings but take a tour from La Paz as El Alto is particularly dangerous at night. Cochabamba: Go for the weekend to escape into the sun: we labelled it the laid back, older sister of La Paz. It has the highest Christ figure in the world (a metre or so higher than the one in Río). Salt flats: these are a bit of a must! Whether on a long or short tour, just do it if you have time: flamingoes, salt plains, deserts and geysers are just some of the wonders you’ll come across. Take all the clothes you own for nighttime: it’s freezing.

I am also looking forward to Riberalta (Amazon), where I will write some articles next month, and Copacabana/ Isla del sol/ Lake Titicaca (Believed birthplace of the Incan civilization).

For travelling around the city, do use minibuses/ larger buses; they are everywhere so you really can’t miss them. Names of streets pasted on windscreens and cholitas hanging out side-windows shouting destinations may put tourists off. But remember, you’re no longer a tourist (even though you may still get called ‘gringa’ regularly). They are very cheap (1/2 boliviano(s), equivalent to about 10/20p) almost regardless of where you go.

Taxis are recommended at night but unless you’re going from the south zone to the north zone (a pretty long way) anything more than 15 bolivianos and they’re taking you for a ride- not in the taxi-passenger sense.

If you’re going further afield, the city’s main bus terminal is where you want to be.

Bolivia is full of micro-climates so weather can be unpredictable. You can be cold and burn being so near the equator so my British burn radar was set wildly off course. In general there is a wet, sunny season and a dry, colder season. At the moment (July/August) we are in the dry, colder season, which means it’s a bit chilly during the day but nice in the sun (which is strong, be warned) and pretty cold at night. Think city daytime gear in English autumn for this time of year and you should be on the right track, with thermals and blankets galore for night.

Avoiding the “traveller” outfits will also help you to become less of a pickpocket target, although if you look anything like me- blonde and pale- you’re already a bit of a sitting duck. Having said that I haven’t had anything stolen to date (touch wood). I feel safe walking around the city by myself during the day; it’s just a question of not being silly with your personal items. I have heard stories of travellers having dirt thrown at them to distract them while their cameras are taken but those sorts of stories exist the world over. On the other hand, El Alto, while being a great place to visit, is more dangerous, so just be alert. Make use of a bum bag and pockets.

Hardly anyone (apart from the people I work with at the magazine) speaks English, so it’s a fantastic opportunity to practice your Spanish, especially when living with people who speak English!

Get talking to the people who work in the coffee shops (where wifi is reliable- useful), taxi drivers, anyone. People are friendly and love to talk about Bolivia. You can improve your Spanish and learn a bit about where you’re living.

You can also get up to speed with “bolivianismos” and some Bolivian slang while you’re here:

La Paz, and more widely South America in general, is diminutive central, so words are often tampered with: maestrito, huevecito etc. If you’re lucky you might hear snippets of Quechua/ Aymara too, or one of the other many indigenous languages spoken in Bolivia.