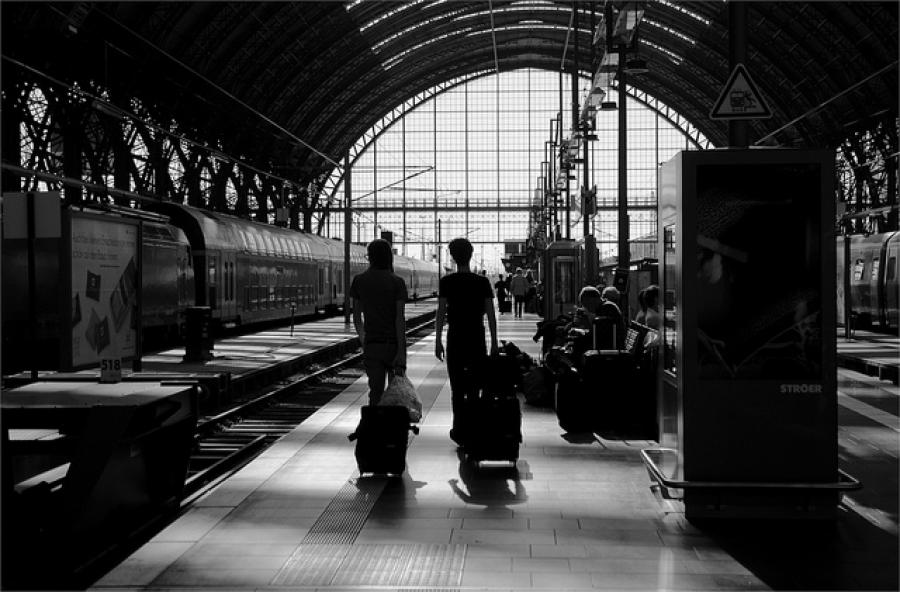 This article was written by Mike Winnington, published on 11th August 2014 and has been read 3828 times.

Frankfurt Living and working in Germany German Mole Diaries Germany
Mike Winnington is studying Modern European Studies (French, German and Politics) at the University of Nottingham. After spending seven months as a Teaching Assistant in France, he is close to finishing his four month internship in Frankfurt.

Starting the next stage of your Year Abroad

It really is a strange feeling leaving one place on your Year Abroad, knowing that rather than returning to the UK, you are about to move to a new city, in a new country and have a completely different experience. After spending seven months in France, I had got used to the French way of life, which I have to say goes perfectly with working 12 hours a week as Teaching Assistant.

Fortunately there were quite a lot of other Nottingham students in Frankfurt, so this made settling in a lot easier. However, even if you don't already know anyone, all bureaucracy feels so much more straightforward the second time around. After having already opened a bank account, phone contract and found a flat in France, doing the same thing again in Germany was relatively easy.

Luckily when I first came out to Frankfurt, a friend had a sofa I could stay on until I found my own flat. The biggest piece of advice he gave me, which I couldn't agree with more, is to find a flat which is near an U-Bahn station. Transport in Frankfurt is amazing, so even if you live outside of the Innenstadt, you can get there in no time with the U-Bahn.

I used this website to find my apartment. I wouldn't recommend looking for a flat until you get to Germany. Realistically, unless you are in the country to do a flat viewing and put down a deposit there and then, you are really going to struggle to find something purely through the internet. The majority of adverts on the website are for Wohngemeinschaften (WG) but you can also find studios. I would definitely recommend living in a WG. I've been lucky to live with Germans throughout my time in Frankfurt and it definitely helps you improve the language.

Due to having little time between my placements in France and Germany, I only had about 5 days between arriving in Frankfurt and starting my internship. I therefore felt under pressure to find something as soon as possible, as I wanted to find something before starting work. As a result I'm living in a flat where the rent is a bit more expensive than I would like it to be, but I can see the Cathedral from my window, so I can't complain too much!

Top Things to Do in Frankfurt

1. Visit Römerberg, which is the most German looking square in the city, home to the town hall, a row of Fachwerk buildings and plenty of restaurants.
2. Go up Main Tower and see Frankfurt from above. I've never lived in a city with a skyline like it, and this is the best place to admire the view!
3. Despite not being able to visit the European Central Bank, nothing says 'I'm in the Eurozone' like having a picture with the big blue Euro sign outside.
4. Spend your Summer evenings, like everyone else, having a few drinks and relaxing on the banks of the River Main.
5. Take a trip on the Ebbelwei-Express. During the weekends, catch a ride around the city on this tourist tram, where your ticket includes a bottle of Apfelwein and a bag of pretzels.
6.Only Berlin has more museums in Germany than Frankfurt, so make sure you visit some. Most museums are free on the last Saturday of the month and there is also the Nacht der Museen, where a single ticket gives you entry to all museums in the city.

Bratwurst, Sauerkraut and Beer. That was all I knew about German cuisine before my Year Abroad!

Here are some delicacies from Frankfurt, which you must try if you ever visit the city:

1. Handkäse mit Musik - the literal translation of this is "hand cheese with music", which obviously makes no sense in English! This traditional snack is a sour milk cheese with onions, served on top of some bread. The music is a polite way of explaining what you'll produce later after eating it!

2. Grüne Soße - Supposedly Goethe's favourite, this local sauce is made from egg and various herbs and is traditionally served with hard boiled eggs, roast beef and even schnitzel. It's so popular that there's even a Grüne Soße Festival!

3. Apfelwein - It's pretty much just a sour version of cider, and there's also a festival celebrating its existence in Frankfurt!

To read more about my time in Frankfurt and my Year Abroad in general, please check out my blog.