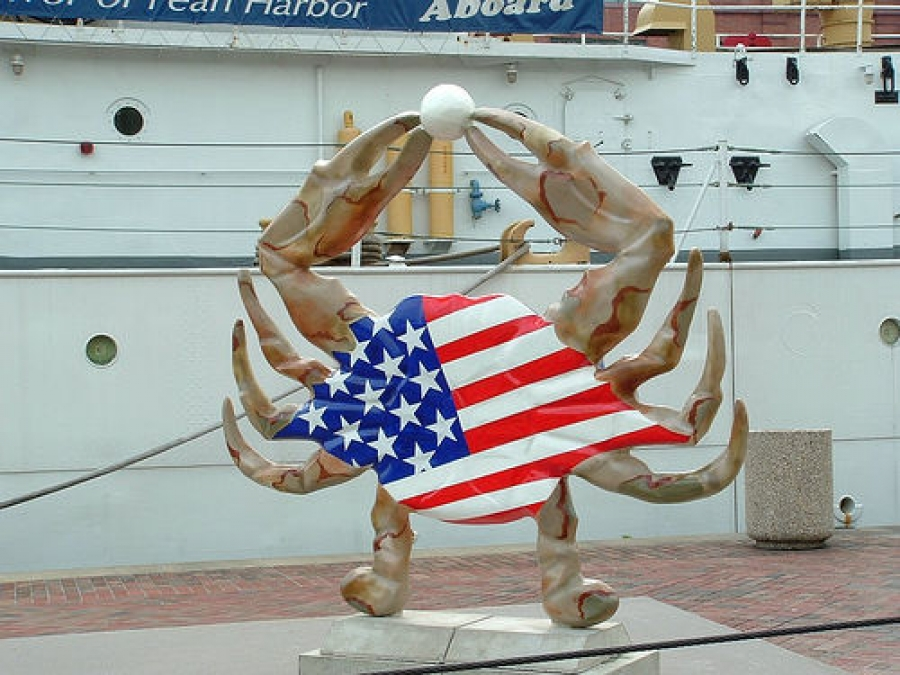 This article was written by Tilly Ingleby, published on 25th August 2010 and has been read 9098 times.

USA Mole Diaries Not a Linguist
Tilly Ingleby is reading American Studies, at Swansea. Here, she gives us an account of the best things Baltimore, Maryland, has to offer...

When I first told people I’d be studying in Baltimore for a year I was met with one of three reactions. I either got a totally blank face followed by ‘er, where?’, a look of panic instantly followed by ‘oh my God you’re going to be murdered’, or a ‘brilliant, isn’t that where they film the Wire?’…

It’s true, the Wire is filmed in Baltimore, and you can forgive people for panicking when you have a look at Baltimore’s rep. But, in the city’s fairness, it’s had a huge transformation and in my eyes, Baltimore is one of America’s finest cities. Situated on the east coast of the United States, about 45 minutes North of Washington DC, Baltimore is the 20th largest city in America and a giant melting pot of nationalities, which only adds to its charm.

My first impressions of Baltimore were good ones. What hit me first (in the physical and metaphorical sense of the word) was the weather. There’s a saying that in Maryland it’s not the heat, it’s the humidity and there’s a backing to this saying. In summer, it is sticky and gross. If you can’t stand 95 degrees (Fahrenheit) and humidity, then avoid Baltimore during the summer months. From September onwards it is absolutely beautiful. It stays sunny and pleasantly warm; you won’t need your coat until December.  The city as a whole has a gritty coolness about it. It’s clear that Baltimoreans work hard and take pride in their city - it’s a vibe you don’t get in a lot of US cities. I love the bay-side setting and the fact it houses the best seafood I’ve eaten in my life. Baltimore is one of those cities that I feel giddy in, which is rare. I can genuinely see myself living there in the future if those lovely Americans want to give me a visa.

Anyone who is worth their salt will know what to eat in Maryland: crabs. Baltimore is situated on the Chesapeake Bay and because of this, the state gets the best crabs your belly’s ever going to come across. Smother them in Old Bay seasoning, a Maryland staple, and wash them down with an ice cold beer and you’ll be in seventh heaven.

If you watch the Food Network (don’t mock) you may have seen Ace Of Cakes, the most amazing cake show in the history of the world. Charm City Cakes is set in Baltimore, if you want a splurge, order one of their masterpieces. They’re on West 30th Street and don’t forget to book an appointment.

One of my favourite things to do in Baltimore is to sit in the (gorgeous) Harbourplace with my iPod and people watch. I can’t articulate the amazing breadth of people you get in Baltimore. My favourite of all time was the guy that covered himself in breadcrumbs and stood like a scarecrow so he could feed the seagulls. You get street dancers, musicians, the lot. Get to the Harbour on a Saturday evening and they show some brilliant open air music shots, the best I saw was a four man acapella group just as the sun went down. Perfect.

I also love the Little Italy neighbourhood (home of Nancy Pelosi), some stunning restaurants and the best tiramisu I’ve eaten in my life. If you’re in Baltimore during the summer (and you’re not sweltering) you can enjoy the film festival, where old movies are projected onto the walls of the buildings. Bring your own deckchairs. Other wonderful areas of Baltimore are Fells Point, which has countless bars and fab boutiques, and Fed Hill, which is a big spot for college students. For the over 21s amongst you, get to Mother’s Bar on South Charles Street, I had a great night (of what I can remember) on my birthday - the Italian Surfer cocktails are out of this world.

There’s a real richness in Baltimore and part of this lies in its heritage. King of the Macabre, Edgar Allan Poe, is buried in the city and both his grave and house are open to the public. If you can get there for Halloween, do, it’s deliciously creepy. The city is museum heavy; move slightly out of the Harbour and you can visit the art galleries, the African American museum and the Jewish museum, both prominent ethnic groups to the city.

Of course you can’t go to the States without going to a game. And Baltimore is a city that loves its sports. Baltimore’s baseball team, the Orioles, are pants, but the stadium is something else and game night is a lot of fun. The team is loveably bad and it’s nice to see the city drenched in orange when the Orioles are in town. The football team, the Ravens, enjoy a lot more success so if you get to the M&T Stadium then the chances of victory are a little higher.

While I may idealise Baltimore, I must acknowledge that the city has its definite no-go areas. East Baltimore is tremendously underprivileged and, on certain streets, rife with gang warfare and crime. Particular areas of the city are under police surveillance , demonstrated by the blue lights you can see on lampposts. Don’t go on these streets. Just don’t.

Sounds scary, but when you think about it, what city comes without dodgy areas? London has its crime-ridden districts, there are places in New York I’d never go to while I was abroad and you only have to watch a few minutes of the news to see the grip that gang warfare has on all areas of Britain.  So before I put you off this fantastic city I’ll put it in perspective: don’t walk around alone at night and don’t piss off a crack dealer.

There really is more to Baltimore than crack, crabs and cakes and I can’t recommend it enough. It’s not the most obvious city to visit, and I know people are more likely to visit the Big Apple or jet off to LA but if you can, pay Maryland a visit. It’s a beautiful state with fantastic weather and the loveliest people.