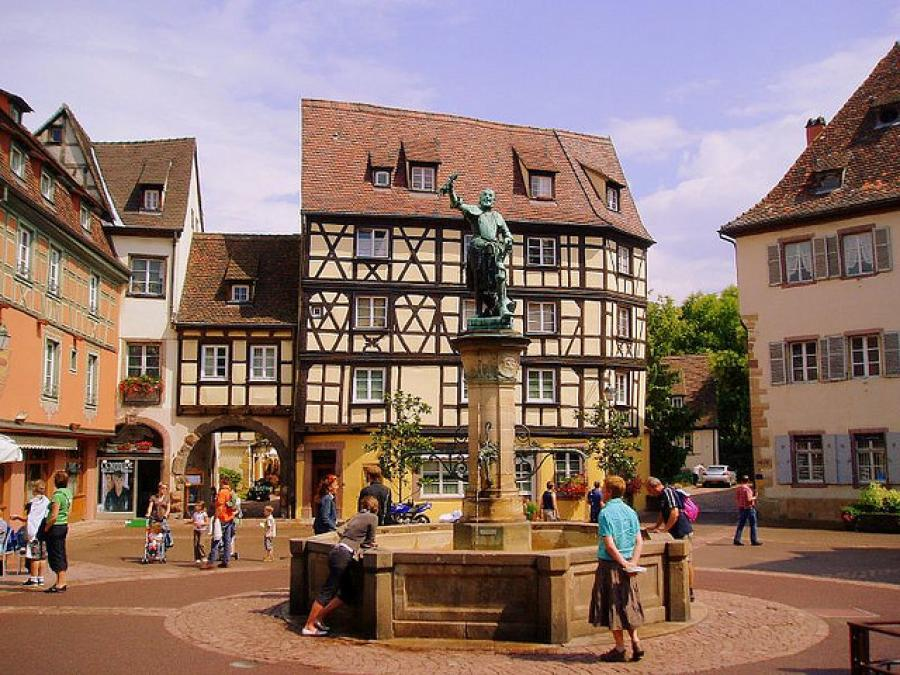 This article was written by Rosemary Maher from The University of Leeds, published on 12th November 2014 and has been read 4801 times.

France French Mole Diaries Leeds Uni Strasbourg Alsace
Rosemary Maher studies French at the University of Leeds and is spending her year abroad working as a language assistant at Lycée Blaise Pascal, Colmar (Alsace, France). This is her insider guide to all things Alsace - including which of the spectacular local delicacies to sample!

Just over a year ago, I was deciding how to spend my year abroad. Studying French meant I was free to choose whether to spend the year in metropolitan France, or in another Francophone country; I chose metropolitan France as I wanted to be closer to home, and felt the culture shock wouldn’t be quite so big. I knew I wanted to do an assistantship with the British Council: this meant a long waiting game to find out where I would actually be spending the year. Last November, I began filling out the application form: seemingly endless questions about my previous experience, why I was suited to the programme and my preferences for location and school type. I chose the Académie de Strasbourg, mentioned Colmar in my application form – and here I am teaching in a lycée in Colmar a year later!

I have now been living in Colmar for seven weeks – but it feels like it’s already become a second home to me. Here is my comprehensive guide on life in Alsace!

Alsace is served by two airports: Strasbourg and the Euroairport, named Basel-Mulhouse-Freiburg. People have told me that Ryanair fly from London Stanstead to Strasbourg, but this route doesn’t seem to be in operation yet. Ryanair does, however, fly from London Stanstead to Basel-Mulhouse Freiburg. Easyjet fly from Manchester, London Gatwick and London Luton to Basel-Mulhouse-Freiburg. Both Ryanair and Easyjet offer cheap flights – provided you book far enough in advance, singles cost as little as £30 one way. When you arrive at Basel-Mulhouse-Freiburg, you will notice there are two exits. One leads to France, the other to Germany and Switzerland. You can use the Swiss exit and take a train from Basel, however the easiest (and cheaper!) way to get to Colmar (and the rest of Alsace) is to use the French exit and take a shuttle bus to Saint-Louis (the nearest French town). The bus costs €2,50 and drops you right outside Saint-Louis train station. From here, there is a train to Colmar (costing €9,40 one way) which takes around an hour.

Colmar is fairly small, so getting around is relatively simple. Walking, or cycling, is the easiest way to navigate the town centre. Regular buses serve the neighbouring villages, and there is also a small train which goes into the valley. If you want to visit Germany – specifically, the town of Freiburg-im-Breisgau – you can catch a bus from outside the train station. The TER (Train Express Régional) service within Alsace is good; you can get to Strasbourg in around thirty minutes, and Mulhouse in around twenty-five. It’s worth investing in a railcard if you think you’ll be using the trains frequently. The ‘TONUS Alsace’ – for people under the age of 26 – gets you 50% off all trains within Alsace and costs €19 for the year. The ‘Carte Jeune’ – for people aged between 12 and 25 – gets you between 25% and 60% off trains across France and costs €50 for the year.

There are several supermarkets in Colmar. Monoprix and Casino are conveniently located in the town centre. About a ten minute walk from the city centre, on Route d’Ingersheim, is Intermarché: this is cheaper than the two supermarkets in town, and has a wide range of products. Hyper-U and Lidl, both located on Route de Rouffach, are around a 20 minute walk from the station: I have found these are the cheaper places to do food shopping! Cheddar cheese can be purchased in the bigger supermarkets – but costs more than the local cheeses. Most milk is UHT, but there is usually a small amount of fresh milk available – note that here in France, ‘red top’ is full fat, and ‘blue top’ is the equivalent of semi-skimmed.

There is also an indoor market in the town centre with local produce. Twice a week there are outdoor food markets. One takes place on Thursdays, outside the covered market, and the other takes place on Saturdays, in Place St-Joseph. The stall owners are really friendly and eager to tell you about the seasonal produce.

For general shopping, most big shops are located on Rue des Clefs, and the side streets surrounding it. The cost of living appears to be higher in France, but is most notable when it comes to toiletries. If your luggage allowance permits, it is well worth stocking up before you come!

What’s a stay in the gastronomical empire of France without tasting some of the local food? (Says the infamous picky eater!) Here are some local delicacies that should be tried when in Alsace:

Tarte flambée: the Alsatian answer to pizza. It has a thin crust, and is topped with crème fraiche, onions and lardons (essentially bacon). This is the classic tarte flambée, but many other variations are available! Tourte de la Vallée: this is almost like a sausage roll, in pie form. Munster cheese: for any cheese fans out there, this is the local cheese. Others have said it’s quite a strong cheese, I’m yet to try it… Pretzels: Okay, so these aren’t exactly quintessentially French but they’re everywhere. In the covered market, there is a stall called Le secret de Justin which sells any type of pretzel you can imagine: salty, sugary, cheesy…

What to do in Colmar

Colmar has a lot of museums. The Musée d’Unterlinden is a museum which features paintings and sculptures which is currently being renovated and expanded. Anyone interested in the man behind the famous Statue of Liberty, should head to the Musée Bartholdi; in addition, there is also a scaled down replica of the Statue of Liberty on the outskirts of Colmar. La Petite Venise is a picturesque, tourist-y area of the town; you can also take a ride on a gondola here. For further entertainment, there are two cinemas: the Colisé is a smaller cinema located in the centre of town, whilst the CGR is a huge multi-plex located just ten minutes’ walk from the town centre. In October, Colmar hosts its own festival du film – there are lots of free film screenings so it’s well worth attending! There is also a bowling alley and an ice skating rink. I’m really looking forward to the Christmas markets which open towards the end of November and continue until just after Christmas.

Whilst Colmar has several bars, it doesn’t offer much on the clubbing front. Drinks are typically more expensive here and strangely it is cheaper to buy a glass of wine than a soft drink! Les Trois Singes, on Grand Rue, is my favourite bar – the music is good, and it’s reasonably priced.

Alsace is known for having a relatively warm and dry climate. When I arrived, in late September, it was warm and sunny. This weather continued right up until the start of November, at which point it became rather cold. Although the weather may be warm when you arrive, you’ll need several warm jumpers for the winter. I am currently getting extremely excited at the prospect of snow when it gets closer to Christmas (on that topic – there are ski slopes in the valley, snow permitting).

Colmar is in a location which facilitates easy travel to neighbouring countries. Germany is a short bus (and train) ride away, and you’re just an hour away from Basel by train: make the most of it! Neighbouring towns and cities such as Strasbourg, Mulhouse and Riquewihr are also worth visiting. For hiking enthusiasts – or just those who like admiring the countryside – head into the Munster valley. There are lots of well-marked trails, and places such as Turckheim, Munster and Metzeral make good starting points for walks.

When deciding where to spend your year abroad, don’t overlook the smallest region in metropolitan France: it has a lot to offer. It is a safe place to live, has good access to neighbouring regions and countries and the nearby national park is absolutely beautiful.

Where are the best regions in France?

I personally did my Year Abroad in ChambÃ©ry, which is a town in the department of Savoie, in southeast France. I love the outdoors so I had the best time as there are plenty of outdoor activities, a...

by Shannon Maile
Living and working in France

How to pack for a year abroad