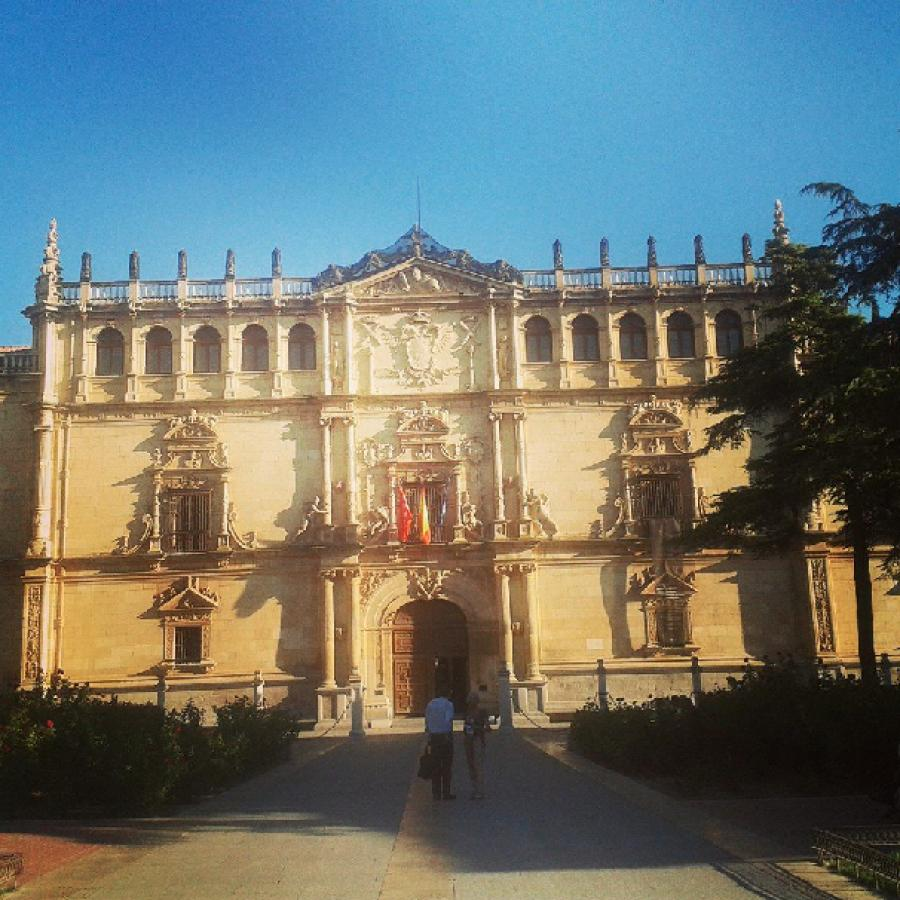 This article was written by Aoife Stubbs, published on 14th May 2015 and has been read 6000 times.

Aoife is studying BA Spanish and Italian at the University of Exeter, and studied Beginners Russian in her second year as an additional subject. She spent the first semester of her year abroad studying at the Universidad de Alcalá, before moving to her second study placement in Padua in the spring. This is her guide to Cervantes' birthplace!

1. A bit about Alcalá

When you first looked at your university’s list of partner institutions and saw the words “Alcalá de Henares”, you probably thought “Where?!”, and might even have written it off as a small town with little to offer. I’m happy to tell you that if you did, then you’d be wrong on both counts. Though rarely described as such due to its beautiful cobbled streets and old-world feel, Alcalá is actually a city, and is bigger in terms of both size and population than Exeter, where I study.

Whilst during the day it might be the sort of place you’d happily show your parents, with its stunning university buildings and UNESCO World Heritage Site status, at night the city very much belongs to the students; this is true above all in the long summer months when Calle Mayor, the city’s main street, comes alive with bars, restaurants and music. Only 40 minutes by train from the centre of Madrid, Alcalá is really well connected, and has a reputation amongst madrileños not only for its beautiful architecture, but also for its incredible tapas.

The university halls in Alcalá have a well-earned reputation amongst students for being of a pretty poor standard, and therefore are not at the top of my list of recommendations. I personally chose to live in private halls, where I shared a kitchen with both Spanish and other international students. This was perfect for me, as it gave me the opportunity to constantly improve my language and meet lots of people.

However, the most popular option amongst Erasmus students by far is to live in private flats/houses. Luckily, the International Office at the University of Alcalá is great in this sense, as they provide students with a list of available flats in the city. In addition, your ‘tutor’ from the Erasmus team will help you with any difficulties in arranging viewings and communicating with potential landlords. Whilst it might be a good idea to set up some viewings before you leave home (try Idealista and Easypiso), many of my friends had no problem simply turning up in Alcalá and beginning the search for a flat there and then.

The great thing about Alcalá, from the point of view of an Erasmus student, is that all of the main bars and clubs are in and around the centre, meaning no need to pay for taxis. No matter which club you plan to go to, a typical Erasmus night out will always begin with a stint in the Green Irish Pub (yes, I know we’re in Spain, but just go with it!). Recently refurbished, it is always packed with both Spanish and international students on Thursdays, Fridays and Saturdays, and by the end of the year you’ll probably know the staff in there as well as your own friends.

Alcalá also has several good clubs, but if you’re looking for something bigger then you’ll be pleased to hear that it’s easy to get in and out of Madrid for a night out. Alongside regular night buses, there are direct, fast trains from Alcalá to Atocha, a station that lies directly opposite Kapital, one of Madrid’s biggest nightclubs which boasts 7 floors. The last train going out leaves at about 11.30pm and the first one home is at approximately 6am, so prepare yourself for a heavy night!

If you’re less of a party-person or are just looking for somewhere good to eat, I can recommend El Quinto Tapón, a vibrant bar which serves huge portions of traditional tapas, alongside American and Latin American creations. If you’re looking for a break from Hispanic food, Francesco’s pizzeria serve beautiful Italian dishes at a reasonable price, and Tommy Mel’s Diner make incredible ice cream milkshakes.

1. Plaza de San Diego.
My favourite spot in the whole of Alcalá, and home to the most beautiful and impressive university building I have ever seen (pictured). Really puts your uni to shame, doesn’t it?

2. Calle Mayor.
THE place to be, Calle Mayor is always a hive of activity, lined with shops, bars, restaurants, and even the odd street performer. There is always something going on here to put a smile on your face.

3. Plaza de Cervantes.
The stunning epicentre of Alcalá, this is the best place to meet friends, take the perfect photo or simply sit and watch the world go by.

4. Birthplace and home of Cervantes.
For literature-lovers and culture enthusiasts, this is a must-see site, attracting a large number of tourists to the city at weekends. For the rest of us, it’s probably just a good place to take your parents when they visit.

This is the bit that I can’t really sugar-coat, I’m afraid. Unfortunately, and I’m sure you’ve probably heard this a million times by now, Spanish admin is a bit of a nightmare. During the enrolment period at Alcalá, prepare yourself for long queues, inexplicable opening hours and repeated trips to the same offices. This can be stressful, but it’s all part and parcel of living in Spain and there are things you can do to make the process easier on yourself:

1. Be prepared
Come to Spain armed with photocopies of everything, including your EHIC, the photo page of your passport and your Learning Agreement, plus several passport-sized photos of yourself and any other important documentation. There is nothing worse than finally getting to the front of the queue to enrol, only to be sent to the back because you don’t have all the required papers.

2. Arrive early
In Alcalá, popular modules are dealt with on a first-come-first-serve basis, so the sooner you get in that queue, the better. I would also advise researching back-up modules before you leave, as for various reasons many people end up taking completely different courses to those that were initially written on their Learning Agreement.

6. Four things I wish I had been told before arriving

1. Take the university’s intensive Spanish course for Erasmus students (Alcalingua).
This is a two-week course that takes place at the start of term, and it is where I made the majority of my friends. I nearly didn’t do it, and I now realise what a mistake that would have been. Aside from being by far the best way to get to know everyone, it is also a good way to kick- start your Spanish, banish those pre-term nerves and, most importantly of all, it is worth 6 ECTS credits. The opportunity to tick off 6 credits before the semester has even begun is one that you’d be a fool to turn down.

2. Throw yourself into everything.
During the first few weeks, attend every Erasmus event you can and accept every invitation with open arms, even if you’re feeling exhausted. You are only young once, and this is the best way to meet people and avoid homesickness.

3. It will all be ok.
Whilst the first week or two might be exceptionally stressful, things quickly sort themselves out and before you know it, you’ll be having the time of your life. Trust me, when I arrived I thought my head might explode from anxiety, but it was only a matter of days before I was wondering what I’d been so worried about.

4. You will never want to leave.
My heart nearly broke when it was time for me to say goodbye to Alcalá and move on to my second placement. Seriously, good luck with that.