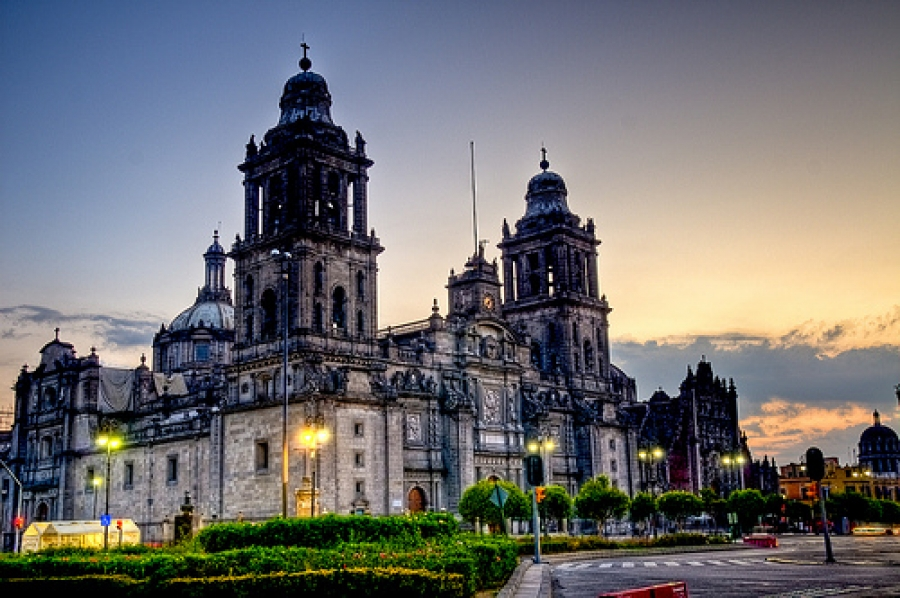 This article was written by Global Graduates, published on 21st November 2010 and has been read 4466 times.

Spanish
City of ‘organised’ chaosMexico City, México or D.F (Distrito Federal) is something totally out of the ordinary – the Mexican megalopolis was built over a lake, thousands of years ago. The Aztecs had decided that they would settle only if they found a cactus, with an eagle holding a snake in its beak (the emblem of the Mexican flag). This image lay before them around the hills of what is now Mexico City, at the very centre of a lake. The ancient civilization thus built over the water to create what locals now refer to as the D.F. An amazing feat, to say the least, as most of it still holds today. Tell-tell signs of what lies beneath the surface can be found around the majestic Cathedral, in the zócalo – part of it is sinking as you read this. A city with more than 25 million people to its name, Mexico City can seem somewhat daunting, daring and darn-right scary at first. Cast your mala onda aside for a minute, and you’ll undoubtedly see why so many choose to make this location home – be it foreigners or locals. Yes, it’s noisy, yes, it’s a little chaotic to say the least, but if you’re looking for a place that has it all, home will be Mexico City. Put your best foot forward, keep your eyes peeled at all times, for better or worse, as you won’t want to miss this...

Why should you choose Mexico City for your year abroad?
Whether you’re here to work or study, you’re not alone. Mexico City attracts over a million expats each year, so don’t be surprised if you hear French, German, English or Portuguese every so often. The great thing about Mexico City is the amount of recognised and world-famous universities it has within its perimeter. Starting with the UNAM, which accounts for many famed linguists, writers, scientists and anthropologists of South America, the city also boasts the Universidad Iberoamericana, the Universidad de Las Américas and the Tecnologico de Monterrey (mostly known for its Engineering faculty, as well as its Sciences department). If you’re planning on working, rest assured that you can grab a pretty good internship at any of the major international companies. Teaching here is also a good option, though make sure you secure something before you come out, or at least have a couple of back-up options as there is quite a lot of competition for English teaching, due to the large number of Americans coming over to Mexico City. With such large universities, the city is thriving with students and young professionals.

If you want to hang out in the trendy areas, your best bet would be to head to Zona Rosa (also the gay district), Condesa, Coyoacán or around the Paseo de la Reforma. These areas have quite a lot of buzz about them, with restaurants, galleries and cute cafés popping up every so often along the leafy streets. If you’re hell-bent on taking in as much culture as possible, head out to the Bosque of Chapultepec – not just the city’s best example of a park, it’s also home to many museums and a (sort of) theme park. Worth taking a day or two to explore. Around this area is where you’ll see most of the city’s colonial buildings, echoing London, Paris and Florence architecture in some parts, with a bit more colour. And colour, lots of it is what you’ll find in Mexico City, let us tell you – be it with the food, the people, the culture or even the buildings. You can get hold of pretty much anything remotely linked to Mexico (the country) in the city’s most affluent market, La Merced. Here, if you look past the hustle and bustle of many rotund senoras shouting out all sorts of expletives, you can get hold of hammocks, bigotes, sombreros, ollas and such like at relatively cheap prices.

If you’re looking to museum hop, you should know that Mexico City boasts the most museums per capital in the world, so the choice is yours...Frida Khalo and Diego Rivera’s house in suburban Coyoacán is a must, as are the murals in the Palacio de Bellas Artes. The Museo de Antropología is an absolute must-see attraction, home to some of the finest sculptures, jewels and handcrafts from Ancient Mexican cultures and civilizations. The Templo Mayor, back by the zocálo, is also worth seeing, as you’ll get an in-depth grasp of what the city once was, how it was built and later demolished by Spanish colonisers, and what remains of the Aztec shrine today. Close-by lies Teotihuacán, one of the best preserved archaeological sites in Mexico.

If you want to see an incredible collection of art and artefacts, you should head down South of the city, go to the Dolores Olmedo Museum, close to Xochimilco – from there, you can hop onto one of the lonchas to see the river (slightly murky) and sip on a cold Corona as your man of the moment whisks you past some eccentric houses.

Going out in such a big city can prove to be quite the challenge – with so much on offer, it would be hard to name one specific place for a beer or a bit of a boogie. The same goes for food; sticking to the centre, you will be able to try and test one of the many Mexican antojitos (snacks) from the street vendors. Legend has it that if a stray dog doesn’t eat the taco meat, it’s because it’s canine grub...You have been warned! For classic Mexican dishes, you can’t beat Los Girasoles, in the city centre. La Garufa, an Argentine grill in Roma, is slightly pricier but well worth it if you fancy a proper cut of steak. French, Italian and Spanish restaurants populate the smarter areas, round Condesa and Roma, as well as Coyoacán. Don’t shy away from trying what you see – eye tacos and tripe may not seem appealing at first, but are damn tasty.

Clubs, as we’ve mentioned, are all over the city, it’s just a question of finding what you’re after. Generally speaking, the neighbourhoods tend to cater to their inhabitants. As such, posher clubs tend to be around Santa Fe and Roma, whilst drinking dens of mala muerte can be found just outside the zócalo.  Be warned – whereas in other places in Mexico, you may not get much hassle for popping open a beer, Mexico City is now cracking down on outdoor drinking, make sure you don’t get caught, if you really must, or face the fine (hefty and involving quite a lot of begging and pleading to not end up in the bote – that’s the jail, to you and me).

A final note: safety. Mexico City has got a bit of a bad reputation in the past few years, for being crime-ridden and prone to ‘express kidnapping’ (whereby a taxi takes you to various cashpoints to help you max out your credit/current account cards). The simple fact is that you should use as much caution here as you would in any other major city. Crime rates may look high, but you also need to take into account the size of the place. Make sure you check the registration plate of the taxi you’re about to take, don’t leave valuables in your pockets, try and not get on the metro during rush hour and have your wits about you. Chances are nothing will happen, but it’s better to be safe than sorry. Having said that, we haven’t met that many year abroaders that have been robbed of more than a peso, by one the fastidious musicians churning out depressing Edith Piaf tunes on an old accordion...All in all, possibly one of the most hectic (in both senses of the word) places to go, on a year abroad or just for a few months. Most definitely a must-do for any traveller!