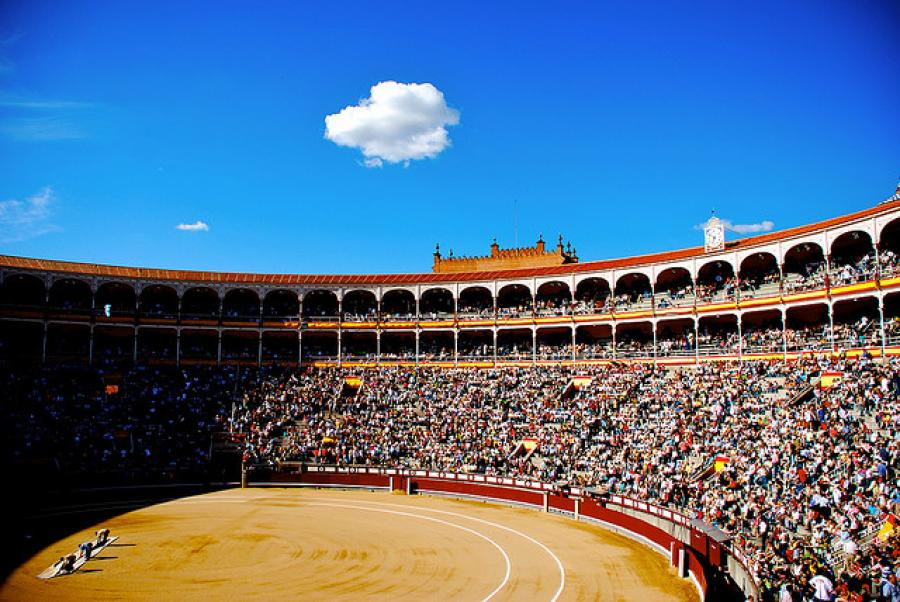 This article was written by Charlotte Byrne, published on 19th March 2012 and has been read 9957 times.

Madrid Mole Diaries
Charlotte is doing a degree in Hispanic Studies and Comparative Literature at Queen Mary's University London, and is studying at the Universidad Complutense in Madrid for her year abroad. Here she passes on in-depth, tried-and-tested advice about accommodation, what to pack, food, concerts, nightlife, things to see, top ten must-dos and more general advice for survival as a student in Madrid.

I am a bit of a granny by nature in that I like to have everything arranged in advance so I arranged my accommodation before coming out here (thank you very much idealista.com) although some of my friends did stay in hostels and hotels for the first week or so while looking for a place – if you are studying the chances are there will be millions of adverts for leases around your university/placement, but for your peace of mind it can be arranged in the space of a few friendly emails.

Expect to pay between €300 and €500 per month depending on where you stay and whether you are sharing or living alone.

My advice for clothes is accommodate for all weather – when I arrived in late August the heat was immense and yet by the end of October I was surprised icicles weren’t forming on my nose. The weather does change very suddenly here in Madrid (9 months of hell and 3 months of winter so they say!) so you will want to be prepared.

In terms of books and stationery, I would say leave the stationery at home as you can rig yourself out for study/work for the entire year for well under €10 in any of the countless “chino” shops dotted around the city – chances are you and the workers will become well-acquainted during your stay as they stock everything except the kitchen sink.

You’ve got your place to stay, now is time to address the second most important part of living abroad – feeding yourself. Eating out in tapas bars and certain restaurants is relatively cheap – 100 Montaditos is a particularly good chain of cervecerías - although of course if you are missing home there are the obvious fast-food chains - expect to pay a euro or two over the price back home.

Alas we can’t always live the high life, and when you do actually take it upon yourself to cook, there are fruterías and carnicerías everywhere, as well as supermarkets which stock most of the essentials – the cheapest being ‘Ahorro más’, ‘Día’ and ‘Mercadona’. Try and avoid the big ones like Carrefour and El Corte Inglés as they are much more expensive.

Note: Madrid is definitely not a place for vegetarians – a stroll down any street you will find yourself face-to-face with a carnicería or museo de jamón – and the restaurants don’t tend to cater too well for them either. In terms of supermarkets, I’ve been told the aforementioned more expensive ones offer a greater variety for the veggies among you.

Your life abroad is somewhat organised for the time being and now you want to get to know the city! So here is my list of top and somewhat obvious tourist attractions (please keep reading to find the lesser-known gems later on!)

Puerta del Sol and Gran Vía – This will probably be your starting point as it is akin to London’s Leicester Square or Oxford Street – shops and restaurants abound! This is the very centre of the city and you can barely move for tourist shops and street performers. Plaza Mayor – Just down the road from Sol is the most picturesque of the various squares of the city and yet another tourist central. Expect over-priced restaurants with outside seating and yet more street performers. La Catedral de la Almudena and el Palacio Real – Free admission on certain days, beautiful architecture and history all around! ‘El triángulo de oro’ – Art lovers will appreciate the golden triangle comprising el Prado, el Thyssen-Bornemisza and el centro del arte Reina Sofía which house works from Goya, El Greco, Velázquez and of course Picasso’s ‘Guernica.’ El parque del Retiro – A wonderful park with a boating lake, the madrileñan answer to the Crystal Palace and various other monuments hidden in its green corners. El templo de Debod – An ancient Egyptian temple that was given as a gift to the city during the 1960s is the centerpiece of the Parque del Oueste and an ideal picnic spot because of its wonderful views of the city. Plaza de España – Another square, hooray! This one has a monument to Cervantes with figures of Don Quijote and Sancho Panza, and often plays host to a great little market. El rastro – A paradise for shoppers. This market takes place on Sunday mornings until about 3pm and comprises a great antiques section and another more “markety” section – watch your bag at all times as it is jam-packed after 11am.

Being the capital city, there is always some concert or other going on, from smaller local acts to big international stars. So far this year I have seen Garaje Jack (a great local rock outfit who are just about to go international) and The Sisters of Mercy and already have my tickets to see Ana Torroja (of 80s Spanish superstars Mecano) and Chambao.

Life in general moves at a nice relaxing pace and the nightlife is not much different, with nights at a bar seeming more popular than nights in clubs. For those that do club, Kapital has to be their very first stop with 9 different floors ensuring a very memorable (or not?) night out. Entry is quite expensive although many Erasmus groups offer reduced rates and even designated nights.

Cinema times also run into the wee hours with many starting as late as 11pm, and some cinemas, particularly the Renoir branch, do offer original language screenings with Spanish subtitles.

The Santiago Bernabéu Stadium – The home of CF Real Madrid offers tours for €16 and they are well worth the money. You can go in the changing rooms, sit on the bench, and see the impressive history of the club. ¡Hala Madrid! Cementerio de la Almudena – You might think this is somewhat morbid but one of the biggest cemeteries in Europe serves as the final resting place for many of Spain’s celebrities, including Lola Flores ‘La faraona’, Estrellita Castro, Galdós and various bullfighters. There is also a memorial to ‘Las 13 rosas’ who were killed there for their political conviction under Franco. Plaza de Toros de Las Ventas – Along with the cemetery this is also in the eastern part of the city and will be a source of controversy for many readers – however that doesn’t mean that you can’t admire its wonderful Neo-Mudéjar architecture. The bullring offers tours, a museum and you can get tickets for a fight during the season (roughly May-October) from as little as €2.50. Andén Cero – Chamberí metro station was shut in the 1960s and left as it was until it was re-opened as a “museum” in the 2000s. Free admission to this amazing time warp! Museo de Cera – Just across the road from the Biblioteca Nacional is the waxwork museum. Some are really well done, others not so but it’s great for old-fashioned cheesy fun and photos. Includes many celebrities from Justin Bieber to Montserrat Caballé. La Gavia – In the south of Madrid and almost in the middle of nowhere, this is a great shopping centre with a cinema and many restaurants as well as a huge Ikea. Great retail therapy. Alcalá de Henares – A great little old town 30 minutes away on the Cercanías trains which was the birthplace of Cervantes. Make sure to check out the “museum studio” of the Nostradamus-like artist Toro Bravo who paints and predicts the future – original artwork starting from €1! Parque de Atracciones – The cheaper alternative to Parque Warner is by no means any less fun! Set in the Casa de campo there is plenty to keep you going at this theme park all day long. My tip is to go out of season as there are no queues – we made friends with the operators of the ‘Tarántula’ rollercoaster after going round five times in a row! Zoo Aquarium de Madrid – I don’t know where they got the aquarium part from but this is a wonderful zoo, also in the Casa de campo, and is open all year round. There are dolphin, bird and seal shows at regular intervals. Specialist shops - There are some wonderful independent shops dotted all over the city, particularly if you hunt around. A few I would recommend include ‘El flamenco vive’ (a shop which sells CDs, DVDs, books, clothes, accessories and anything and everything related to flamenco), ‘Discos La Gramola’ (a haven for vinyl collectors with prices starting from €1 an album) and ‘Chocolatería San Ginés’ (the oldest churrería in Madrid – great quality and reasonable prices make this the perfect stop after a night out).

For those studying: get organised. Much of the admin at most Spanish universities (as my friends in other ones will agree) isn’t the most organised in the world and you will find yourself having to chase up a lot of paperwork and other things yourself, so be prepared. Cheap travel: Apply for your Abono Transportes as soon as possible as it takes about 3 weeks to come through – this is your key to getting around town cheaply. Mobile phones: It’s worth investing in a cheap phone or SIM card on a Spanish network as using your regular phone will cost a bomb. Banking: If you don’t have a Spanish bank account, use your card to pay at every opportunity that you possibly can to avoid the fee at ATM machines. You will need some form of ID to go with it. Exploring: Make the most of the opportunity to get out to see the country and use the language. And most importantly: HAVE FUN! You only have one year abroad, so make it a memorable one!