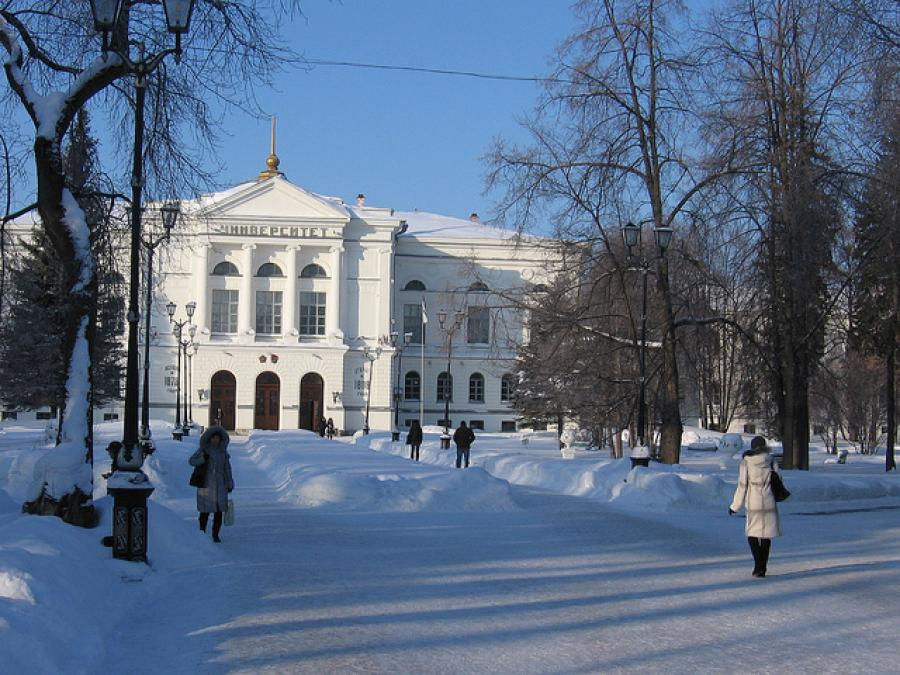 This article was written by Hannah Paver, published on 1st August 2014 and has been read 4078 times.

Russia Russian Durham Uni Siberia Ab Initio
Hannah Paver is studying Spanish and Russian at Durham University. She spent her year abroad in Madrid, Spain and in Tomsk, Siberia, having learnt Russian from scratch at university - here's how she got on!

Why did you decide to learn a language ab initio?

From even before I started at university I was constantly bombarded with the question ‘But why Russian?’ The truth is for me there was never any question of not taking up the opportunity to try something new. The challenge and adventure it posed was both what attracted me to it and also what frustrated and terrified me - and finally made me love it. Having now finished my year abroad, and having had time to reflect on my experiences, I can now answer without a doubt that taking up a new language at university was one of the best things I could have done.

What were the main challenges of starting to learn Russian at University?

Whether you’ve never studied a language before or are already competent in a couple, the prospect of taking on a new language can be daunting. The first weeks, months, couple of years can be tough, but the main thing to remember is you’re never alone with this. Upon beginning Russian, I was in a class of people, all of whom like me, saw the mountain of new grammar and vocabulary as an impossible feat to climb. However, this only brought us closer together. Unlike studying a language at post A-level standard you can guarantee you will not be the only one having difficulties. I remember staring at grammar pages with a look of despair countless times, only to look up and see the rest of the class mimicking my expression, and because of this the environment is often much more open, with everyone trying to help each other to grasp the rules and master the language.

The challenges a new language throws at you only serves to make it more interesting; you are constantly learning something new and in turn the rewards and sense of achievement you get when you master it are immense. Doing your year abroad in that country just goes to prove this.

Tell us about your year abroad!

I have never been so nervous as when I was boarding my flight from Moscow to Tomsk, Siberia. I would be landing in the middle of nowhere, where it was a well known fact that English was not spoken, and after 6months in Spain, the Russian I’d mastered seemed long forgotten. It’s true that I spent my first few weeks not really sure what was going on and what people were saying (and, equally, they had little idea of what I wanted to say!), but at those moments I reminded myself why I chose to study something new. I was in the middle of Siberia, a place very few get the chance to experience, and seeing the real Russian way of living. The experience was an adventure from start to finish and allowed me to have so many once in a lifetime experiences. I learnt to snowboard, I ice skated (or attempted to!) alongside national figure skaters and had the opportunity to travel to Lake Baikal, the world’s largest fresh water lake. Yes, I had a fantastic time in Spain, but picking up a new language really allowed me to see the world and try new things.

How did your language skills improve on your year abroad?

Learning a new language gave me so much more than just amazing experiences; my language improved vastly. I went from hardly being able to communicate to being able to fully understand and hold real conversations with native speakers. In fact, the most rewarding thing was being able to really notice the improvement I was making day by day, which helped me grow in confidence tenfold. With Spanish, I arrived already being able to communicate and so never had the opportunity to appreciate how my skills were developing, but when studying a new language you improve so quickly that you can’t help but notice! Going to a country where initially I could hardly speak the language also meant that I made some great lifelong friends. Whichever country you’re in there will always be an international contingent, eager to meet any non natives and recreate a homely atmosphere, and as for the natives, well you know you’ve made a friend for life if they tolerate your incomprehensible mumbling until you get to grips with their language!

All in all, learning a new language can be tough, but the opportunities and experiences that come with it make it more than worth the effort. If you’re asking yourself ‘why would I study a new language?’ maybe ask yourself ‘Why not?’ instead. You’ve got nothing to lose and everything to gain.