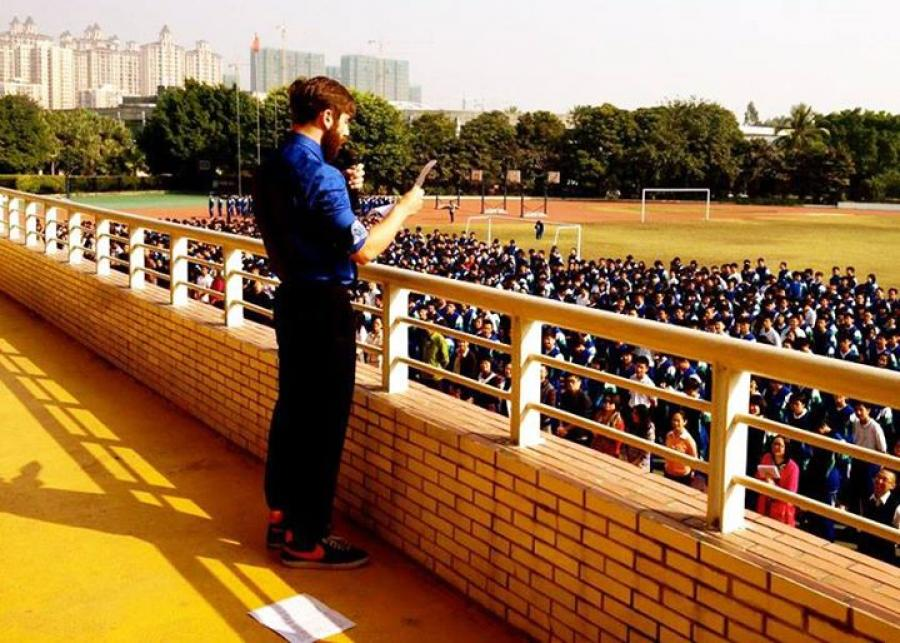 This article was written by Thomas Brada, published on 18th February 2014 and has been read 4378 times.

China Chinese Language Assistant Bristol Uni Graduates Guangzhou British Council StudyWorkCreate
Thomas Brada, University of Bristol graduate in English and Drama, is currently working in the city of Guangzhou. Shortly before setting off on his Chinese New Year travels, we caught up with him to find out about life as a Language Assistant in China.

1. Why did you choose an assistantship over a traditional graduate job in the UK?

In the UK, I would have started at the very bottom of the rung. While I am looking forward to pursuing such opportunities in the future, right now I’m relishing my role in China, where I can be the ‘boss’ straight away! I’ve been thrown in at the deep end, teaching English to classes of over 40 students on my own. Luckily, the British Council’s teacher training, provided as part of the induction course, has made things much easier. The job has also given me the opportunity to take on professional responsibilities, as well as the freedom to shape my own work.

2. Have you taken part in any extra-curricular activities at school?

Yes, it’s been a busy first few months. My housemate (another assistant) and I took part in the school’s sports day, breaking records and winning prizes alongside our Chinese students. We’ve also played in the teachers’ football team and joined the school choir. I recently performed in a concert – singing a duet in Mandarin, dressed up as Father Christmas. A surreal moment!

3. What’s the most memorable moment of your year so far?

Me and the other assistant (we work in the same school together) were thrust in front of the entire school, 3,000 students and lots of teachers. We were invited to lead a morning assembly to mark the first 100 days of our time in post. Fortunately, we had some help from our Chinese language teacher to translate the English to Mandarin in advance, so that we could deliver the speech in both. We thanked the school for their hospitality and talked about why we love China. Unsurprisingly, the students were all laughing!

4. What type of skills have you picked up?

After that experience, public speaking is definitely a big one – I’ve grown in confidence through dealing with lots of new situations. I’ve learnt how to adapt a lesson activity for a mixed ability class and integrate into an unfamiliar working and living environment, alongside local teachers. And of course, ‘China’ is becoming a global buzzword, so I’m looking to boost my job prospects by focussing my efforts on learning Mandarin and getting to grips with the culture.

5. What’s surprised you the most about China and Chinese people?

Everyone is incredibly open and progressive. The reality of living and working here is far removed from the draconian, militant image of Chinese culture and society presented to us by Western media. People in China are aware that their world is opening up and are excited to catch a glimpse of what’s outside. They’re intrigued by Westerners and eager to meet them – the locals are just as interested in us as we are in them.

6.What aspects of Western culture are your students interested in?

They’re keen to hear British and American music, particularly the 14- and 15-year-olds – anything from Avril Lavigne to One Direction. They also love Mr Bean, so I let them watch a clip or two in class, but only when they’re well behaved!

7. What is it like to be living in a country that’s experiencing such momentous change?

I’m witnessing China’s industrial revolution first-hand. There’s a relentless pace of social and economic change here - expansion is happening so fast. I see new buildings constructed every day and people’s attitudes transforming just as quickly. It feels like being part of history in the making. It’s an amazing experience, and I’m enjoying every single moment.

Visit the British Council website to find out how you can apply to China by 21st February 2014.

Being a graduate Language Assistant in China