Home Articles Karlsruhe-only a few weeks left of YA: Enjoy life to the full trains!
Share
Tweet
Write for us

Karlsruhe-only a few weeks left of YA: Enjoy life to the full trains! 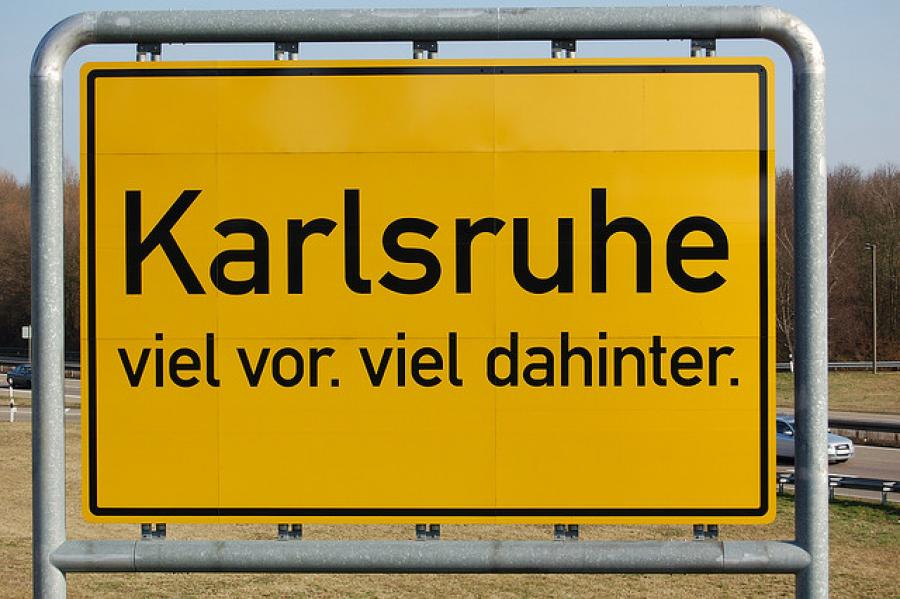 This article was written by Claire Woolly, published on 21st August 2012 and has been read 23217 times.

Travel Journal Karlsruhe
This time last year I knew I was coming to Karlsruhe. This time last year, I knew I would be working in Fichte Schule. This time last year, the aforementioned two points were helping, (granted, to a minimal extent) in soothing my ‘oh-pants-I’m-spending-a-year-in-a-completely-unknown-place-where-I-will-be-speaking-a-non-native-language’ jitters. (‘Jitters’ depicting an emotion somewhere in-between terror & excitement. Trepidation, perhaps- yet ‘jitters’ is my preferred term, so let’s stick with that.
This time this year (you’re so feeling the ‘this timing’ I can tell...)  I have just under two & a half weeks left in Fichte Gymnasium, & I’d estimate about a month & a half remaining from the whole year abroad experience. Jitters upped & went at some point (perhaps on that infamous evening in September, shortly following ‘a few’ introductory beers with fellow teachers, though feasibly it could have also been a little later than this).   The irony (& everyone loves a little bit of irony, let’s be honest) is: I sit here now (this time this year) wishing that I could go back to last year’s jitters, because that was when it was all beginning, kicking off, los gehting.. or whatever. The jitters were the beginning of an amazing experience or amazing experiences, & I like beginnings of amazing things. Who doesn’t?!   Anyway, in the previous few weeks my mood has shifted decidedly from the melancholy musings of ‘blink & you miss it’ – (a term generally affiliated to those among us who are prone to expressing the line ‘my-haven’t you grown’ at family gatherings to anyone preceding the age of forty) to full blown ‘Carpe Diem’. Or, & as my beloved Krauts would put it ‘das Leben in vollen Zügen genießen’. NB this is what I typed into google-translate, a tool employed for many a second year German essay- the title of the blog is the subsequent English translation. Google translate:-brilliant, yet autistic. In the sense it takes everything quite literally.   I can pin-point the date, place & time of said mood-shift. June 17th, I was sat in Frankfurt Hbhf, in the backside of McDonalds at 12:23am, a luke-warm hot-chocolate in hand, surrounded by 40-something year old, riotous drunken German blokes celebrating the Germany football win against Denmark. After flying back from England where I’d been for a Grad ball & a Christening, my delayed plane had entailed a missed train & a route change home. I wasn’t due back in K’ruhe ‘til gone 3am(!!)

Anyway, the drunkards- when not singing incoherently, slurring in one another’s faces or tucking away one of those nutritious Big-Mac’s with large extra-greasy fries, were hap hazarding attempts to ‘engage’ with single members the opposite sex; seemingly under the collective impression (no doubt fuelled by beer & success) of constituting a gang of Brad Pitt cum [insert name of favoured attractive male celeb]. As one of the only members of the opposite sex prevalent at that hour (the other being a, erm, slightly tubby lady in trackies, a stained sweatshirt & socks with sandals) - I found myself on the receiving end of most, if not all of their ‘amorous’ advances. Something which admittedly would have been quite flattering, had my pursuers not embodied all of the above description. An odd moment to genuinely be thinking ‘I love my life’ without the merest smidgen of sarcasm, yet there you have it.   Main stations are primarily speaking, not places to hang around after dark, (unless you are a drug-dealer or a prostitute). I’d rung my parents, to reassure them (or was it me) that I was going to be ok, there were police around due to the game, I was in MacDonalds (that well-known safe haven) where other people were & I’d done the Reeperbahn & survived… etc etc etc. One of the drunken Brad Pitts toddled over (in his mind swaggered) & pawed (caressed) the hand resting on my suitcase. Gaping, initially confounded by his rank audaciousness, I organised my face into an expression to befittingly convey: ‘do that again & I will shove that football trumpet up your schnauzer or somewhere equally unpleasant’ & he toddled off, accordingly chastised, back to his ‘Brad-Pitt’ posse, leaving me to take a seat with my fast-cooling hot choc & giving me a well needed moment to myself.   As I sat there, I reflected how much had changed in the year. I was struck by how confident & calm I felt, despite the late hour, my surroundings & everything else I have mentioned. Such a scenario would have had me quaking & shying away, feeling desperate & panicked only a year before. Instead, however I accepted what was & started to enjoy myself, experiencing one of those ‘happy’ moments, made all the merrier due to its unexpected nature. I felt proud of myself, entertaining the notion that I had over the year, albeit subtly, changed & developed. There are very few people who could boast indulging in such an epiphany in the backside of a MacDonalds! Since then, rather than wallowing in melancholy of ‘it’s all coming to an end’, I’m back on the hefty pursuit of ‘Vitamin B’….   The Germans penchant for being unabashedly naked in public places still leaves me somewhat flummoxed. We’ve covered this, with the sauna-story. At least in saunas I can sort of understand it. Sort of.   A couple of Fridays back, one of my American buddies & I ventured out to a lake (of which there are many) in an outskirt village of Karlsruhe. It was a sizzling hot day, the sun beaming down relentlessly & undiluted, not a cloud in the sky to provide some mild relief. The lakes are normally all man-made, created from extensive quarrying. The waters are a stunning, stunning blue colour, pristine- a far cry from your standard boggy English pond, thus rendering them perfect for a little dip.   So there we were, settled in the midst of a sandy beach, plastering on sun-cream & enjoying the spectacle of a kid throwing a ball into the water for a little yapping excuse of a dog to retrieve. The beach was jammed, as  could be be apprehended for such a melting hot day. We were overcome with the yabble-gabbling of the surrounding German families. It suddenly became apparent to both of us, however, that further along, there were far less people. After a brief discussion, evaluating if the pair of us could be bothered to get off our behinds & hip-hop a few meters across singeing sands on to the quieter spot, it was concluded it was worth the effort. My mother has always told me ‘if something looks too good to be true, it probably is’. Well yeah.   You know where this is going. We got there & everyone was in the nudey-rudies. Awkward. For the second time in a year, I felt the earnest need to apologise for wearing a bikini; I couldn’t help feeling like a pervert. A bloke was stretched out on a towel, utterly starkers, facing up to the unforgiving sun. A combination of empathy & the sight in general prompted me to wince.   ‘Well, that’s going to lead to some sunburn in a few uncomfortable places!’   A far briefer discussion dictated a stealthy retreat to louder yet more decent ‘waters’ & we hip-hopped ,giggling indiscreetly, back the way we had come. Lesson learnt. 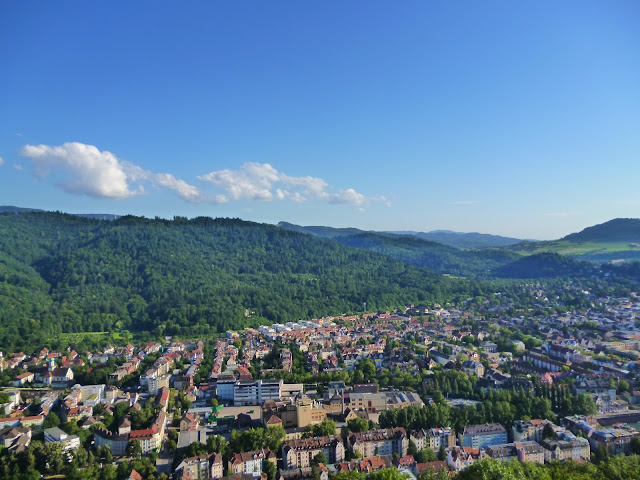 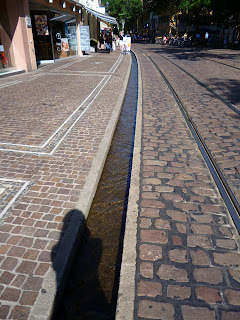 One such stream.
Since last writing I have re-visited Freiburg, so utterly beautiful it puts even the nice areas of K’town to absolute shame. Throughout the city run these little man made streams of seemingly clear, clean water. As a child, I can remember paddling in same such streams on family holidays & thus felt pressed by nostalgia to reenact such childhood memories. Again, I was with two American buddies, one of whom had spent some time in Freiburg studying. He said:   ‘I wouldn’t do that… drunken people piss in those’. Bam the childhood nostalgia moment fled. 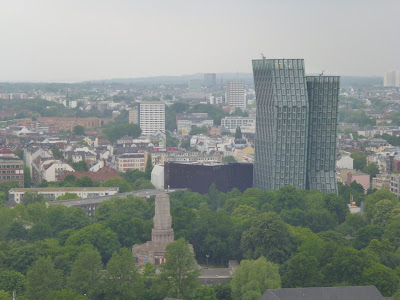 Facing towards the R-Bahn & my hotel.
And Hamburg & the Reeperbahn - I wrote I was going last time. Within its own right, Hamburg proffers its fair share of formidable scenery. As for the R-bahn… well actually, as things go I managed to get enough sleep, despite iridescent neon lights flashing through the wafer thin, white curtains all night & the incessant pound & throb of ‘music’ thrumming up from the club below. I explored much of the city during the day, deigning to visit an art-gallery & partaking in other such culturally enriching expeditions. I made sure I was back, safely barricaded in my hotel room before complete darkness fell. Although to be fair, it’s probably safer than your average back-street in Southampton; a multitude of tourists decorate the street all night, on a quest to locate the best pubs & clubs (of which there are many). From my window I observed a transvestite tour-guide, (bedecked in mini-skirt & a tight leather boob-tube combo) guiding thirty or so tourists into a paltry-looking sex-shop, directly across from the hotel. They were in there for quite some time.

Karlsruhe: Do one thing everyday that scares you..