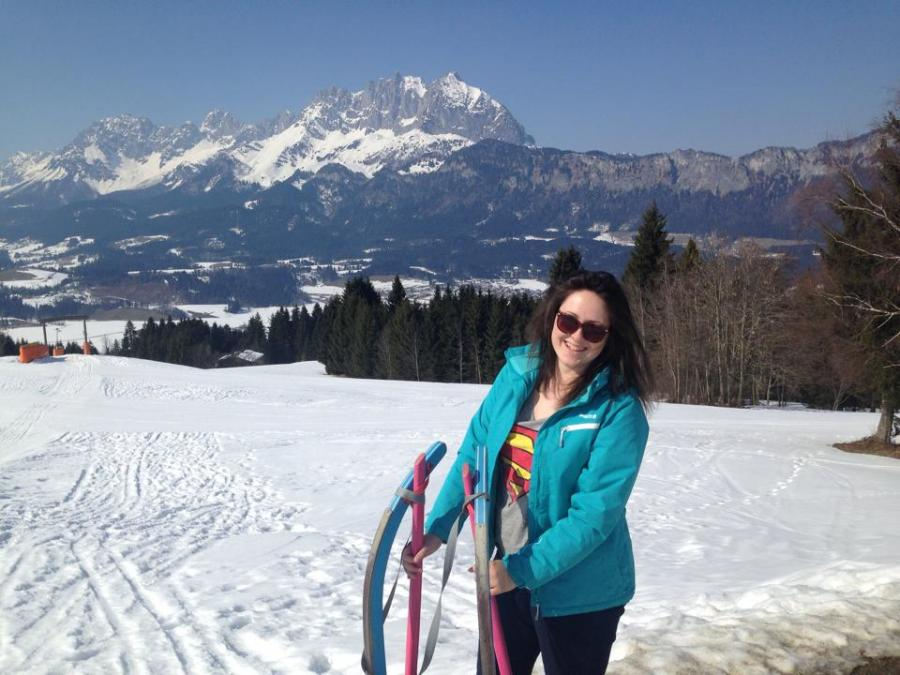 This article was written by Helen Parkinson from Lancaster University, published on 23rd April 2016 and has been read 5118 times.

Helen is in the final year of her degree in French and German (ab initio) at Lancaster University. She spent the second half of her year abroad working as a British Council Language Assistant in Kitzbühel, Tyrol, Austria, and here is her insider guide to moving to and living in the region...

I’m ashamed to admit that preparation for my year abroad in Austria consisted mainly (okay, fully) of copious viewings of The Sound of Music and even more copious helpings of apple strudel. Let’s just say that upon arriving in Tyrol, I half-expected to see Julie Andrews spinning on a lush hilltop while extolling the virtues of schnitzel with noodles...

Alas, it transpires that ordering a portion of Spätzle with the country’s most famous culinary export is as much of a cardinal sin as confusing Austria with Australia – yup, a worrying amount of people are guilty of this. But spend your year abroad in this Alpine wonderland and I can promise that Tyrol will soon become one of your favourite things.

Just like Germany, Austria is divided into Bundesländer (states); Tyrol is the third largest by area. Its capital, Innsbruck, has welcomed everyone from Habsburg royalty to Winter Olympians, having played host to the Games twice. The region is further divided into the Tyrolean Oberland, which lies to the west of Innsbruck, and the more easterly Tyrolean Unterland. Locals speak Tirolerisch, a variety of Austrian German that is similar to the dialect spoken over the German border in Bavaria. Picking up the lingo isn’t as daunting as you might expect; in fact, its informality can sometimes make it seem easier than Standard German!

As an English Language Assistant, I was lucky enough to inherit my predecessor’s digs. Home was a room in a hostel that cost €450 a month, which is relatively cheap for one of Tyrol’s pricier ski resorts.

If you have to organise your own accommodation, it’s important to start your hunt as soon as possible because competition is fierce, particularly during the ski season. As a year abroad student it’s likely that you’ll want to live with German speakers, so why not try a Wohngemeinschaft? This type of flatshare is popular option for young people, both students and workers; there are many available in Innsbruck on EasyWG. If you’ll be living outside of the city, you can check out Airbnb’s section for long-term lets or a regional Facebook group such as Wohnungsbörse Tirol. If you’re particularly stuck, it’s worth getting in contact with a local tourist information centre who should be able to pass on the details of suitable landlords or hostels.

Despite its mountainous setting, Tyrol is incredibly well-connected and your regional airport may well fly directly to Innsbruck. Don’t panic if not, though, because it can sometimes be cheaper and more convenient to fly to Munich and take the train southbound.

Austrian trains, by the way, are amazing; they’re super-speedy and often have those cool Harry Potter-esque compartments that make you feel as though you’re travelling to Hogwarts, not Innsbruck. You can get direct trains from the Tyrolean capital to Switzerland, Germany, Italy and Hungary, so the itchy-footed needn’t worry about cabin fever.

If you buy one thing during your year abroad in Tyrol, make it the ÖBB Vorteilscard: a discount railcard that gives you 50% off all train journeys in Austria.

If you’re planning on travelling around Tyrol on a regular basis, then you could also consider buying a weekly or monthly Verkehrsverbund Tirol (VVT) ticket offering unlimited train and bus travel in the region.

While British public transport shuts down at the sight of even the most minuscule snowflake, Tyroleans are rarely defeated by the weather.

Eating and Drinking
Traditional Tyrolean fayre is as delicious as that of its German neighbours, but also just as unhealthy; however, many restaurants serve huge complimentary salads with their dishes. Local specialities include: Speckknödel, a bacon filled dumpling; Kasspatzln, an arguably tastier version of macaroni cheese; Kaiserschmarrn, pancake slices served with fruit compote. Try them at:

Stiftskeller, Innsbruck – in the shadow of the imperial buildings, it’s always packed with tourists and locals. Schatzi, Kitzbühel – this pink paradise counts Arnold Schwarzenegger among its fans Auracher Löchl, Kufstein – 600 years later, this renowned restaurant is as popular as ever

Tyrol is famous for its schnapps; in fact, it is Austria’s biggest producer of this fruit brandy. Drinking out isn’t as cheap as you might expect, especially in the ski resorts. Luckily for us, the University of Innsbruck’s Erasmus society offers some great student nights where you won’t be ripped off.

Shopping
Let’s start off with the boring bit: food shopping. Tyrol has a wide selection of small supermarkets and convenience stores, but apart from in certain ski resorts and train stations these are never open on Sundays. For low budgets head to Lidl or Hofer, Austria’s version of Aldi. Spar, Billa and MPreis are popular mid-range stores, while Merkur is more of a Waitrose.

If you don’t arrive expecting the Trafford Centre, you’ll be pleasantly surprised by Innsbruck’s shopping offering – there’s even a Primark! Should you fancy a change of scenery, the Outlet Centre just over the Italian border at Brenner offers reduced designer goods.

I hope this guide proves useful for anyone thinking of or preparing for a year abroad in this beautiful part of the world. If you want to know more about the life of a Language Assistant in Tyrol, please check out my blog.

In the words of the locals: “Pfiat enk!”

See the answer to the previous question: How do I transport all my stuff? It recommends a good firm called Send My Bag.

I'm in Basel, not Winterthur, sorry! I found accomodation through Basel uni's personal ad's page, ZHAW might have something similar? Otherwise try AirBnB for a short let. More on my blog here: https...

The 5 Unspoken Dilemmas of Hostelling