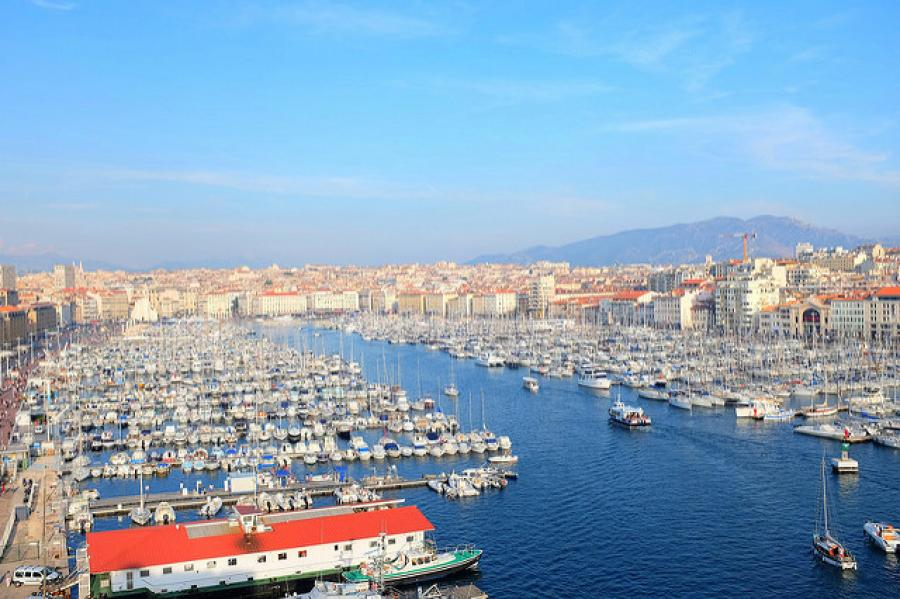 This article was written by Ben Brunton, published on 18th August 2016 and has been read 4773 times.

Ben Brunton is a French and English Literature graduate from the University of Sheffield. He's currently on a lecteur exchange and about to go into his second year of teaching English at the Aix-Marseille University in France. Here is his insider guide to living in and making the most of your time in Marseille.

Although it’s often overshadowed by its neighbouring town Aix en Provence, Marseille – France’s second largest city – has a lot to offer to year abroad students and tourists alike. From nature to culture, there’s something to keep everyone occupied in the city and its surroundings.

From historic gang crime and a chequered past to city of culture in 2013, the town has made some big steps in improving its image in recent decades. Proof of this can be seen just off the Vieux Port, where, jutting out into the turquoise water is Le MuCEM; a recent addition to the city’s museums that hosts a permanent exhibition on Mediterranean civilisations and culture as well as other rotating exhibitions throughout the year.

For Art lovers the city has a further two galleries; Le Musée d'Art Contemporain [MAC], the contemporary art gallery, and Le Musée des Beaux-Arts, a fine art gallery. And for just about everybody else the city is home to heritage, history and natural history museums that trace the city’s roots back to its birth as a colony of the ancient Greeks and beyond. What’s more, most of these offer significant reductions or free entry to students on presentation of a student card, regardless of nationality.

Not limited to its museums, culture spills out onto the city’s streets. Whether this is in alternative and artsy areas such as ‘le Panier’ or ‘Cours Julien’ where street art can be seen covering the facades of cafés and boutiques, and floral displays growing from recycled tyres and old shoes on the front of artists workshops; or in the multiple basilicas strewn throughout the town, from Notre Dame de la Garde on high, or ‘La Major’ down low.

In addition to this, the city’s notoriety on the French rap scene makes it a prime destination to see live up and coming bands at ‘Les Terasses du Port’ and other locations throughout the city.

As football fans will know Marseille is home to one of France’s top three football teams and, in spite of bad press during the Euro this year, hosts league games all year round with little trouble.

Predominantly surrounding the sea, given the city’s position on the Med, Marseille is host to some stunning natural features. One which goes with goes without mentioning is ‘Les Calanques’ a stretch of beautiful hidden bays that span between the city and Cassis, a noteworthy seaside town in its own right and only a short bus ride away. It’s possible to explore Les Calanques by boat, with tours offered from both Cassis and Marseille by kayak and, for the more adventurous, by foot, as hiking trails interweave the rocky bays. Although for the last undertaking an IGN map that can be bought in most newsagents is recommended. What’s more, revision needn’t be boring here as there are also several beaches which, as of April, offer water sports, swimming areas and a sunny spot to brush up on the subjunctive with cafés close by.

As Aix Marseille University is split between both towns it is natural that Marseille is often overlooked when it comes to finding a place to live for Year abroad students. However, the city offers more affordable rents than its counterpart, with flat share prices averaging at around €400 and studio flats at €450 per month. A potentially more viable option for Erasmus students studying sciences, as the main science faculty can be found at the university’s St Charles campus. In addition to this be aware that some flats come with ‘charges inclus’, a.k.a household bills included, others don’t. Something to bear in mind before heading out for the year.

Local transport is, as in many French regions, heavily subsidised for the under 25s and with the purchase of a Cartreize under 25s card it’s possible to undertake a return journey from the point of issue of the card for €2 within 24 hours. In addition to this Marseille boasts two metro lines and regular inner city bus services with reasonable fares.

As for national transport, there are reductions as standard on trains throughout France, but with the purchase of a Carte Jeune 12-27 for €50, further reductions can be had. But for those that don’t mind slightly longer travel times, France has recently seen an influx of budget bus companies that were previously banned including, Megabus, Flixbus and Ouibus. There is also a new high-speed, low-fare train service called Ouigo that runs from Marseille to Paris, which offers much cheaper prices than the standard TGV.

1. Prepare for bureaucracy
Although it’s often repeated, it cannot be repeated enough; the French are bureaucrats to the core and seem to harbour a special wariness for technology. On arrival at any French university (or indeed school if you’re on a teaching exchange) be prepared with several passport photos, adequate identification and proof of your accommodation in the country.

2. Join a club or society
Be aware that unlike in the UK most students live at home so the social dynamic is very different and while societies do sometimes exist, they are quite rare. However, it is possible to find societies open to the public in one form or another in most big cities; these can take the form of book clubs, language tandems, knitting clubs, or even political and charitable groups. The best ways of finding out about such events tends to be to inquire in book shops, or even at the local Mairie (in smaller towns). Although, ages vary hugely compared to university societies it’s an excellent way to put your French skills to the test in a friendly environment.

3. Talk to people
One piece of advice that I would give myself if I were to re-do my year abroad would be to get out, get talking and getting involved. See things, look around you and make the most of your region. Talk to French students and local people, you might not be surprised to hear that ‘non-student types’ often have interesting stories to tell as well. Join clubs and inquire about local traditions. As a people the French are proud of their plurality, under one national identity there is a whole host of regional identities – almost as many as cheeses – and they enjoy nothing more than explaining these to us uncultured northerners.

4. Embrace change!
My last piece of advice relates to the fact that differences are often the cause for missing home when they should be the reason to enjoy your time abroad. This doesn’t mean you have to don a beret and live on a diet of snails and garlic, it just means no matter how much you miss home it’ll still be there when you go back, so in the meantime enjoy yourself.