Home Articles "A life changing" experience; Emma on her IAESTE placement in Vienna
Share
Tweet
Write for us

"A life changing" experience; Emma on her IAESTE placement in Vienna 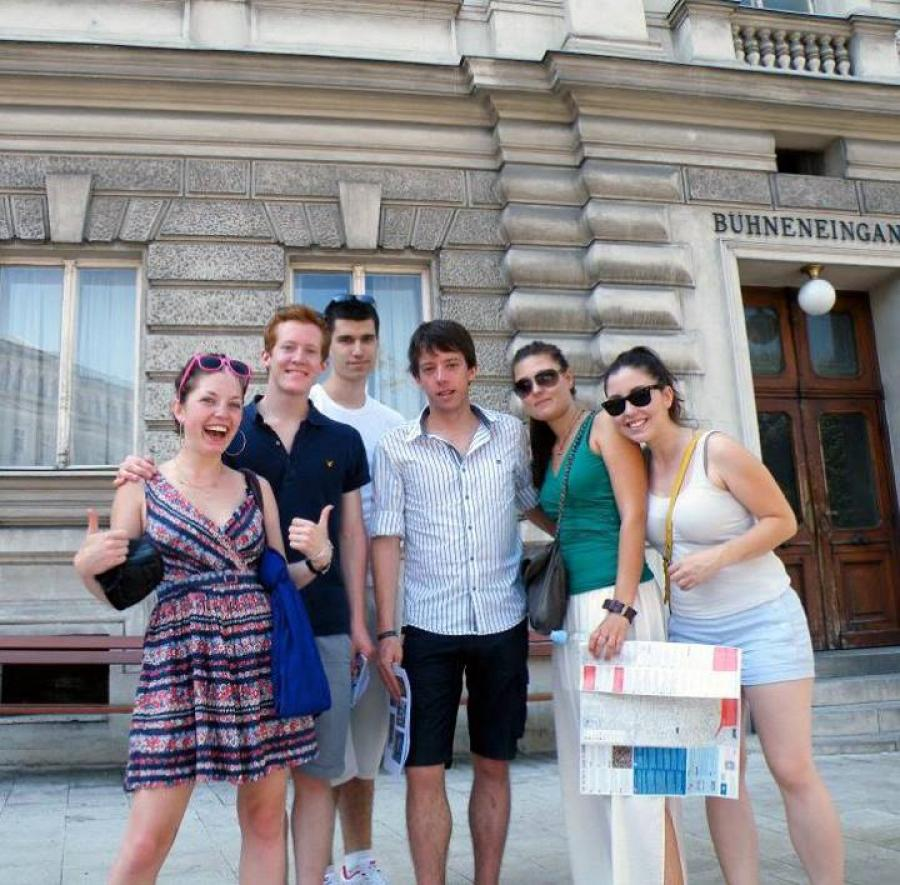 This article was written by Emma Gayner, published on 20th March 2015 and has been read 7830 times.

Edinburgh Chemistry student Emma Gayner originally wanted to go to Japan during her studies, instead she did a ‘life changing’ IAESTE work placement  at the University of Vienna in Austria.

1. How did you find out about IAESTE?
I saw a poster by chance one lunchtime at uni, advertising a talk about internships abroad. I had been talking to my mother only a couple of days ago and had had the “what are you going to do with your life?” talk (lecture) so I thought applying for an internship might keep her happy for a little bit. In the talk I heard about internships all over the world including Australia and USA so I registered, and when the offers list came out I thought I would aim high and apply to placements in Japan and India. I was unsuccessful.

Downbeat, I had to tell my Mother that my hopes and dreams for work experience abroad had come to nothing. But, a week or so later, I received a call from the British Council saying they found a placement for me in Vienna, Austria. Now given that I had originally applied to Japan and India, I though hopping across to Europe would be mundane. How wrong I was!

2. How was your first day?
I was picked up by Michael, the Vienna LC president, who helped me buy a train ticket, get a coffee and all the other things you need to know when living somewhere new. Michael took me to Vienna University where I would be doing my 6 week long internship. I was introduced to the team and shown around the department before being presented with my project.

3. What did your placement involve?
I am a chemistry student and so had been interested in the groups research area; mass spectroscopy analysis of cancerous proteins. My involvement in this was to prepare samples for mass spec analysis by gel electrophoresis followed by protein extraction techniques. I was given training in the different techniques involved, a bag of samples, and some lab space. I was left to decide my own working hours to suit my schedule and the analysis techniques performed.

4. How was your first weekend in Vienna?
The IAESTE Local Committee had organised a social evening at a faux beach bar after my first day of work. I met some more of the Local Committee members including Clara, the summer reception officer and Alex who was in charge of incoming exchanges, as well as the other IAESTE trainees. The trainees I met in Vienna came from all over the world, and I lived alongside people from Pakistan, Chile, Brazil, China, Canada, and all over Europe. That was an experience I have never found anywhere else.

The Local Committee had also planned a series of activities for the first weekend of our placement. When Friday evening came around, we registered and received our weekend packs complete with T-shirt, city map, and information. We quickly donned our name tags and started to meet the visiting IAESTE members and trainees. We were then escorted to one of the university buildings where a huge BBQ and party had been put on to celebrate the beginning of the ‘Vienna Weekend.’

On Saturday our somewhat groggy group congregated for the city challenge tour. We were put into teams and had to identify photos of major landmarks around Vienna. It was an excellent chance for people new to the city to get to know their way around, visitors and local trainees alike. In the evening, we all went to a tavern where we enjoyed traditional Austrian food and wine. We all ate far too much but it was so good we couldn’t resist! Sunday consisted of breakfast and saying goodbye to our newly made friends. It was an exhausting but seriously enjoyable weekend.

5. How would you sum up your IAESTE experience?
I learnt a lot from working in a university. It has given me a much better understanding of my future plans and what I want to do in life. I have formed strong friendships with people from all over the world, and I am now a board member of the IAESTE Local Committee which I am enjoying greatly. As a result of this, I was able to travel back to Austria, just over a year after I left, for the Central European Conference in Klagenfurt. There I attended workshops and talks about running an IAESTE Local Committee and reunited with old friends.

My IAESTE internship was honestly, the best thing I have ever done and has changed my life!

Can you pick your IAESTE work placement?

Hi there, Yes, you do get to pick your IAESTE work placement - we wouldn't expect anyone to do a placement unrelated to their work. You get to choose from our catalogue which highlights all the sub...

How to decide what to do on your international placement