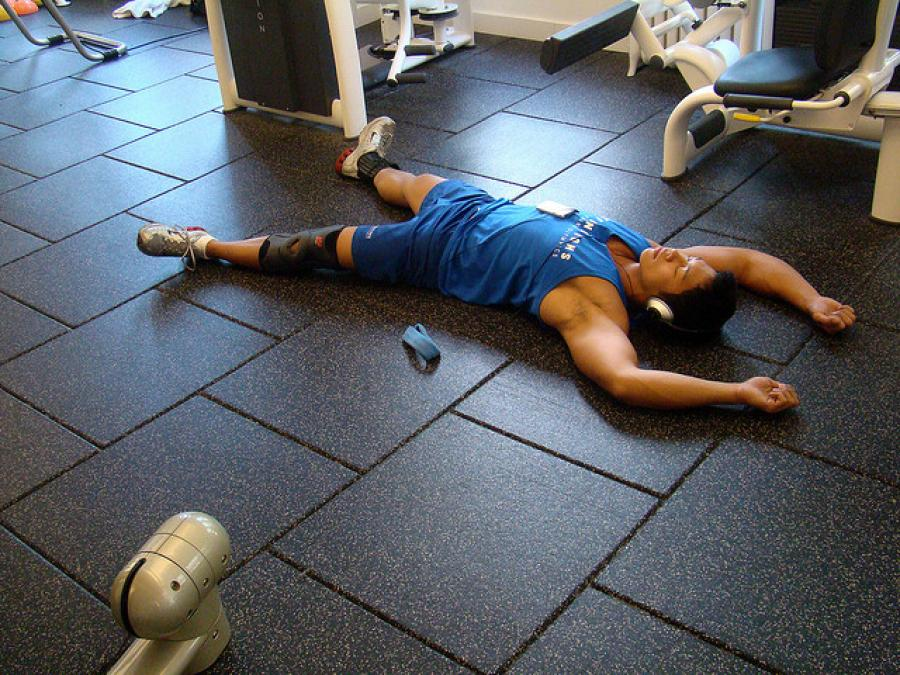 This article was written by Joe Butcher, published on 1st March 2015 and has been read 9821 times.

Joe Butcher studies Spanish at the University of Leeds and is working as a British Council Language Assistant at a high school in Alicante. If you're thinking of hitting the gym whilst you're in Spain, this guide is a must-read... If you want more insights into Spanish life, have a read of his blog!

Firstly, I’d like to dedicate this article to my dearly beloved bingo wings. Bingo wings, my sweethearts, together we’ve been through the thick and thin (crust pizzas). You’ve always been there to keep me warm throughout the harsh winters, and it forever pains me that I will no longer be able to vigorously shake you in the mirror to amuse myself.

Alas, all good things must come to an end, and through my recently acquired gym membership, I am deeply saddened to say that I am slowly toning you into lean muscle (actually, more like a slightly soft orange, but that’s still an improvement).

I have, in fact, been regularly attending gym classes since November. I like to think I’ve improved, as the instructor has stopped ferociously correcting my every movement, but it’s probably more likely that she has lost all hope and has accepted that I’ll never be able to do a squat without looking like a constipated toad. I find it most enjoyable though, even if my flat is up four flights of stairs and I often find myself contemplating spending the entirety of my erasmus grant on having a stairlift installed.

Despite my friend and I having attended for over three months, we are still yet to work out what each one of the actions are actually called. One move in particular, called 'estiro' (stretch) confused us both in very different ways. I thought the instructor was saying 'vestido' (dress) and I was furiously pondering why I was hurling my arms above my head to represent a fashionable garment of clothing, and Lucy thought she was saying 'estilo' (style), and assumed us to be throwing stylish shapes in the air to release some tension after some tough hamstring stretches.

Another word we’re yet to crack signals the quick movement of our bar weights over our thighs. I am beyond convinced that she is shouting 'bolsa' (bag), indicating a ritual-like shopping gesture in which women exercise their handbag holding muscles. Obviously I excel in this one.

It pleases me greatly to report that the music during these sessions is most adequate. At first, I found it to be a cacophonous wall of unpleasant noise; a relentless beat with no more melody than my four year old cousin would be able to produce through trying to play a tune by blowing into a hammer (actually happened). However, no less than two weeks ago, a fellow member of the gym – one of the most camp men I have ever witnessed in my entire twenty years of being (he makes me look like Bruce Willis) (Actually, scratch that, there exists no universe in which I could ever be remotely straight. He makes me look like a lesbian) - tampered with the music, and more and more Beyoncé has been sneaking its way into our workouts. I am very content.

10 Tips for Surviving the Gym

1. Embrace your inner tomato
The Spanish appear to have mastered natural selection. They can seemingly work out for hours on end, retaining that distinctive olive-skinned and beautiful bronze complexion with ease. I, as an Englishman, cannot. Five minutes in and I'm redder than a strawberry in full bloom. My hair is managing to stick in the air and glue itself to my face at the same time, and my forehead is producing enough sweat to comfortably water an allotment for a year. All of this is made that much worse by the fact that the woman next to me looks more composed than Myleene Klass on a catwalk in Milan. My advice, therefore, is to accept this predicament as inevitable and consider it part of the "English Rose" appeal.

2. Your towel is your best friend (although hopefully not your only one)
Linking to the aforementioned slight perspiration issue, you will become very dependent on your towel. Turn up without it and you run the risk of flooding the floor and drowning everyone in the room. What good would your impeccable abs be then?

3. Secure a spot near a window
Even if you have never been to Spain, never left the north of England or even never left your house, you are probably vaguely aware of the fact that Spain, on the whole, is hot. Today is the 2nd March and it is 27 degrees outside (although that hasn't stopped the Spaniards from wrapping up warm in coats, scarves, hats and numerous pairs of distasteful gloves). In the gym you will be warmer than two spooning penguins on holiday in Tanzania, so you'll be wanting to do everything in your power to catch that elusive breeze of cool, refreshing air. Plus, you can always do as I do and pretend the breeze is a wind machine and you are actually Britney Spears performing at the VMAs and everyone is in awe of you. Whatever motivates you to keep squatting.

4. Avoid the speakers
To say that Spanish people talk loudly is something of an understatement, and I am wholly convinced that everyone in this country is somewhat completely deaf. The music used to motivate you to whip those legs in the air is played at such a deafeningly high level that it surely must be causing frequent earthquakes somewhere in the world. If you want to leave the class with your hearing intact, I suggest you position yourself as far from the speakers as possible (you may have to balance this against tip 2 and decide whether you'd rather roast alive or not be able to hear anything for the whole of the next day).

5. Treat yourself to some luxurious gym gear
Whilst I am always a strong advocate of looking as fabulous as possible, it is easy to slip into a routine of wearing sweatpants and old, faded t-shirts to the gym. Seeing as the room is almost guaranteed to be full of mirrors, why expose yourself to this torture? So go to the nearest sports shop and purchase yourself a brand new sparkly pair of spandex. I recommend luminous orange.

6. Keep one eye on the instructor at all times. Or both eyes.
In fact just point your entire body in her direction. The gym can be a fast-paced environment, and if you're up against the deafening music, the tomato face and a heavily accented instructor, there is a high chance you will have very little idea of what is going on. So while you're lifting those weights (or, like me, just trying your hardest not to pass out/ give up and cry), try and at least be slightly aware of what the instructor is doing.

7. Revel in your foreign charm
It may seem odd at first, but to these people you are exotic and interesting. You come from a faraway land, with strange colours of hair and skin and a peculiar indecipherable language. You will draw a lot of attention to yourself without trying, so you can either choose to bask in this mild celebrity-like status, or stay in the corner and feel embarrassed and shy. I fully endorse the famoso option.

8. Refrain from devouring an entire box of Jaffa Cakes 15 minutes before class
This one doesn't specifically apply to Spanish gyms, it's just a general tip that will see you well through your life. Jaffa Cakes are delicious, but eating them just before you participate in a 90 minute sit-up, press-up, step-up fat burning extravaganza is not the best of ideas. You'll feel queasier than Jack Dawson when the Titanic lifted itself in the air (I'm not good at boats).

9. Try lots of classes to learn exciting new words
There are likely to be a variety of classes on offer. I've managed to sample a few, and have thus picked up fascinating new words such as Spinning (spin class) and Zumba (three guesses). In all seriousness though, the gym is great for exercise but it can also be a place to learn, which is why you're here in the first place, right? I am remaining hopeful that mancuernas (dumbbells) will feature in my final year university examinations.

10. Learn to laugh at yourself
At the end of the day, you are foreign. You are probably going to feel a little out of your depth at times. But try not to fret - remember that you are constantly oozing exotic allure, and the instructor will probably think you cute rather than irritating when she shouts "aguanto!" (hold that position) and you think "ooh yay, agua break" and reach for your ever-inviting bottle of water. Relax, let off some steam, and have fun!

The contraceptive pill in Spain?

After a quick google, it seems that there are a lot of different ideas about this.  I've read that you can buy it over the counter, or visit a GP or family planning centre over there, and that you'll...

Seeing a doctor in Spain?

Hi, I had a similar experience last year in Madrid. I'd been feeling pretty ill for a while with what turned out to be a nasty virus but put off going to the doctors because I thought it would be real...