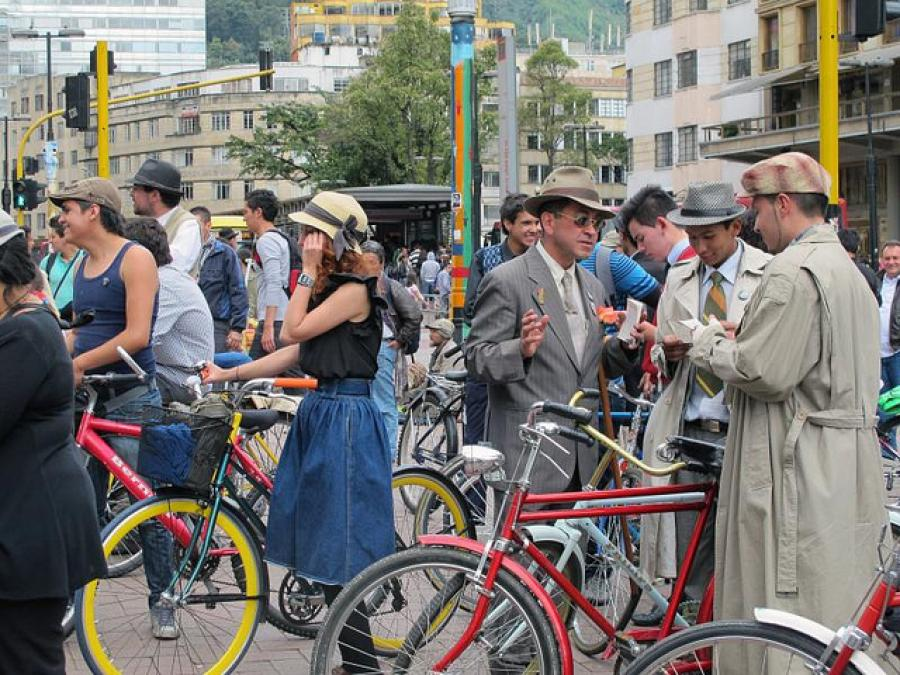 The Tweed Run in Bogotá by Carlos Felipe Pardo

This article was written by Rebecca Heitlinger, published on 19th January 2016 and has been read 6060 times.

Rebecca is studying Modern Languages at Oxford University, and is currently on her year abroad in Germany where she is working as an English Language Assistant at a school in Berlin. To follow the tales and anecdotes she has collected along the way, check out her blog, but in the meantime here is Rebecca's handy list of 10 ways to spot a British expat...

1. Your English sentences always have one token word in the target language
An easy way of pretending you’re fluent. You find yourself subconsciously saying things like, “It’s a bit kalt outside, think I better take my Jacke.” Socially unacceptable in England, but a charming conversational quirk when abroad.

2. You automatically have a million things in common with any English speaking person.
Since moving abroad, your ears have become hyper sensitive to the English language. You can smell an expat a mile away. Once you’ve awkwardly established that you are a part of the same secret society (“Are you..?”) a whole series of conversation starters are unlocked. Cultural differences, grammar complaints, mutual personal habits. The possibilities are endless.

3. People assume you’re a world expert on the cultures and traditions of every English speaking country.
I have no idea about the rules of baseball, I don’t know what Americans eat on Thanksgiving and no I do not understand why they have a holiday to celebrate colonialism either. We may speak the same language, but I am just as far removed from their culture as you are.

4. You have an encyclopaedic knowledge of all supermarkets that stock British products.
You lock eyes with a McVities product as if it were a long lost lover, can spot the purple glint of a Cadbury’s bar from across an industrial warehouse and the mere sight of a Walkers crisps packet (which, incidentally, looks and tastes exactly the same as Lays, its European counterpart) instils you with the sense of patriotism you never had.

5. You assume that you can do a day trip to anywhere in continental Europe.
You are determined to make the most of the fact that you border about four different countries; a paella in Barcelona for breakfast, a crêpe in Paris for lunch and night out in Berlin after dinner. There’s no major channel in between, what could go wrong?!

6. Your suitcase is 10% clothes, 90% tea.
Totally practical. Whereas new clothes can be bought, there simply is no substitute for British tea.

7. You conveniently have all the same opinions of a native speaker.
Better to automatically agree with the bigoted views of a native speaker than risk interrupting a flowing conversation. I could challenge you on your mild xenophobia, but my polluted grammar and would surely undermine the convincingness of my argument.

8. You realise you have taken politeness and common courtesy for granted.
At the beginning of your time abroad, you thought you had landed in some kind of weird dystopia where hostility was everyone’s default setting. Only the course of time could reveal to you that it is actually us who are polite in excess, rather than some terrible deficiency on their part.

9. You realise that, with the exception of politeness, British people are inferior in all other respects.
They may seem rude, but when it comes to anything other than courtesy, they put Britain to shame; they can drink without binging, can sun bathe without burning and are always infinitely better at English than you are at their language.

10. You have great pride in British airports.
The ‘Brit abroad’ lifestyle inevitably means spending an undesirable amount of time in airports. This has invariably lead to an unfortunate realisation; Gatwick, Heathrow and Stansted, etc have all spoiled us rotten. We swan into a capital city airport of any other European city ready for a two hour pampering session of Prêt à Manger sandwiches, Starbucks coffee and a duty free shopping spree. Instead, we are greeted with a barren departure lounge and the promise of a €10 cheese sandwich. Thank God I’m heading home, you can’t help but think to yourself.

by Charlotte Aitken
Living and working in Germany