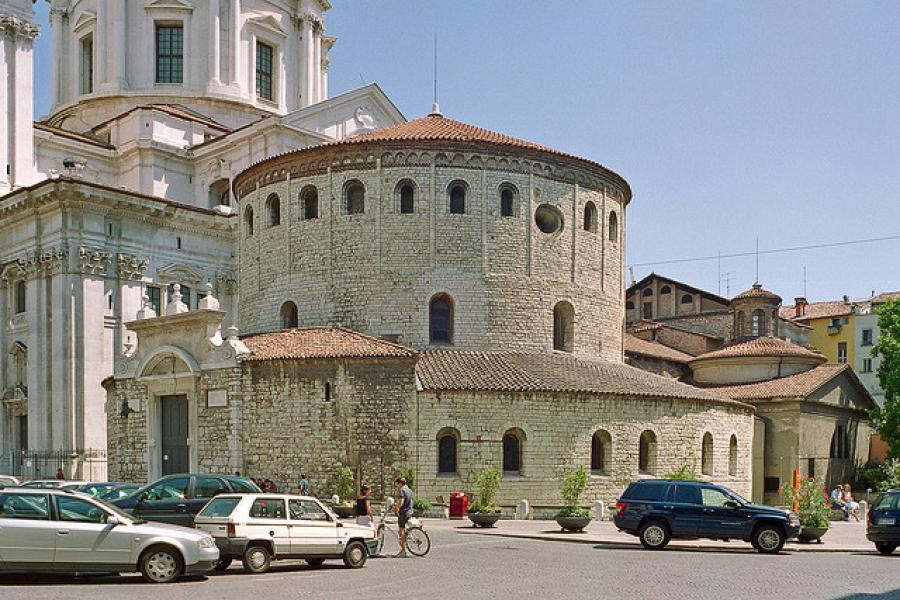 Suzie McKee is studying Spanish and Italian at the University of Bristol. She is currently on the second half of her year abroad in Brescia, Italy, working as a language assistant, having previously worked as a receptionist in a language school in Gran Canaria. Read her blog for more on her year!

The thought is more than daunting. Packing up and saying farewell to the comforts of the UK in order to move into somebody else's house, to eat somebody else's food, to live with somebody else's family... abroad. Even though I have previously worked as an au pair, something about this venture seemed a little unsettling.

My new home for 5 months would be Gussago, a tiny little town around 20 minutes from Brescia; a city sandwiched between Milan and Verona in the north of Italy. When I first googled the town, I saw pictures of snowy scenes, learnt that it had a rugby festival, and that I should expect some good wine from the Franciacorta region. It turned out to be deserted, it smelt awful, and there were many goats.

Here I will recount some of the ups and downs of living with my host family!

On arrival, it was just as awkward with the family as I had imagined. I was collected from Milano Bergamo airport by the parents and their son, 6 year old Francesco, who was holding a super cute little welcome sign. We had talked a little on WhatsApp and FaceTime, so they were't complete strangers to me, but it really was a difficult beginning. Within 8 minutes I had already scratched the boot of their car lifting in my suitcase and had unknowingly sworn in Italian in front of a young child, but could only apologise in Spanish. A super start. Thankfully they turned out to be a lovely little family, even welcoming me with my own hand-painted cereal bowl.

1. Expectations
A couple of friends who have also lived with host families told me amazing tales of beautiful en-suite bedrooms with private balconies, whilst others scared me with their nightmare stories of single camp beds tucked away in the corner of a living room. I'll admit that a bedroom is pretty important to me. Although I'm not a hermit and don't spend that much time hidden away in my room, I did want to feel comfortable in my own space - which happened to be the basement. It can be pretty hit and miss, but I was quite fortunate in that I was given a double bed and my own shower; however it was a pull-out sofa bed and the shower was in a laundry room, so life in the basement wasn't as private as I had hoped for. The house is beautiful however, and even has its own swimming pool. You can't have it all I suppose!

2. The advantages
I would say there are definite advantages to living with a host family. I noticed my Italian skills rocket in the first two months. I decided to have no shame and to just throw myself into learning the language, and it really helped me to develop a solid ability with conversation. The family were only too willing to help, obviously in return for some English practise, but nothing formal.

My accommodation and meals were also completely free. From my experience living in a shared student flat in Gran Canaria, I would spend around €450-500 a month on eating and living, so it was great to save some money. Even having the flu was a much nicer experience than normal, as living in a centrally-heated house, having adults around to care for me, and someone cooking some warm, hearty meals for me was more than comforting.

3. The disadvantages
However, these meals may not always be to your taste, which brings me on to the downsides I've found when living with hosts. I could not stand some of the food I was presented with. I'm a very picky eater, so much so that I find going out for meals challenging. Being given some questionable brown soup or some random vegetable cake took me way out of my comfort zone. What happened to the stereotypical pasta-eating, pizza-loving Italian family? I don't know, but what I do know is that without this host family throwing crazy dishes under my nose, I would never have looked twice at an asparagus risotto.

It is also worth bearing in mind that you don't just become a member of the immediate family unit, but also the extended one. You are expected to meet the uncles, aunts, great grandparents, second cousins, neighbours, colleagues, hairdressers, everyone. Whoever they are, and whatever connection to the family they have, you should know that they'll want to meet you.

4. Fitting in
You should also know that they won't necessarily like you. When I first met a grandmother, she asked me if I was the babysitter and commanded me to hang up her coat. It gets better though, I promise. 5 months on and I even occasionally get a 'ciao bella'. Although, I must say that it is extremely hard to understand her. Some of the older family members speak in a Brescian dialect but it may as well be Swedish to me, I'd probably comprehend it better. However, this obstacle helped me to develop the skill of controlling a conversation. I've got to know Italian gestures more thoroughly, and I now know to nod, smile and laugh when appropriate, even if I only understand 20% of the conversation. An excellent tactic to help you through a lengthy Italian family lunch.

5. Independence
Once you become more acquainted with the family, it does't necessarily mean that they trust you like they would their own child. It took me at least two weeks to be given a house key, and a further week to be allowed to use the bicycle, which definitely gave me some independence. There is also a house alarm which I still haven't been given the code to, resulting in the family keeping an ear out for me into the early hours if I choose to go on a night out. Having a late dinner or heading to some bars with friends often becomes a bit of a logistical nightmare, especially with the thought of my host parents waiting up for my return always in the back of my mind. I won't lie and say it isn't restricting, but I don't mind too much seeing as there's not a whole lot to do in Gussago.

6. Making an impression
Apart from the awkward extended family, spending time with my host parents and Francesco is really easy and often fun. They want to show me the area and even took me to their house in the mountains for a weekend of skiing. I have come to know more about Lego and Spiderman than is socially acceptable for a 21-year old female, but I really enjoy watching the family's level of English improve. Even hearing Francesco asking politely for some more water at the dinner table completely in English makes me realise that I actually have made a difference to his language-learning. It's satisfying. I can honestly say that even though I don't know if I would return to a host family experience like this one, it has been invaluable to my year abroad adventure, and I wouldn't change it for the world.