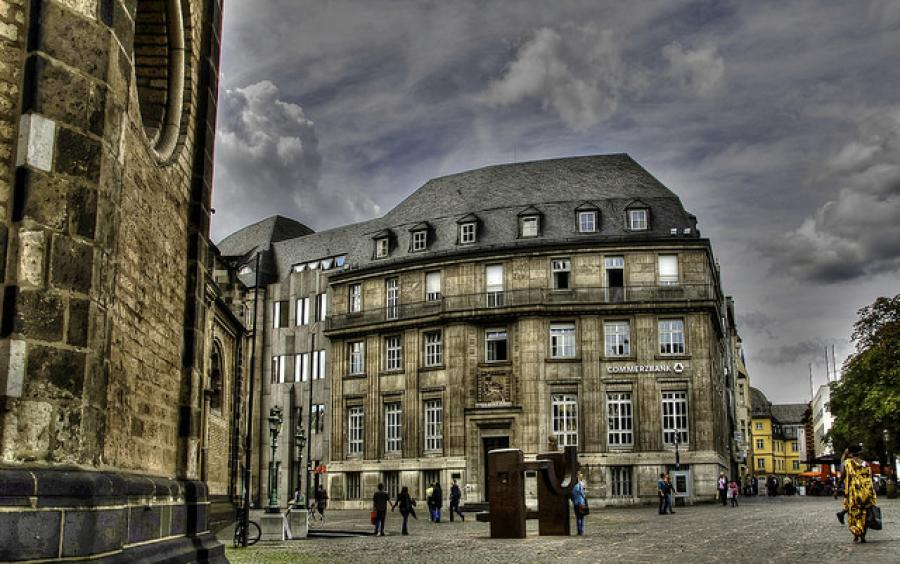 This article was written by Jack Nathan, published on 8th September 2014 and has been read 23660 times.

Living and working in Germany Accommodation Sheffield Uni Bonn Germany
Jack Nuttgens is from Sheffield and studied German and Spanish at Newcastle University from 2010-14. He spent his year abroad in Bonn, Pontevedra and Dresden, and even managed to squeeze in a trip to China. Here he tells us about his search for accommodation in Bonn and the unusual characters he met along the way...

So almost everything’s arranged. For your weaker language, you’ve been accepted for a British Council placement in an as yet unconfirmed part of Spain. For the summer, you’ve been offered a pretty damn impressive placement with a multi-national Sprachedienstleistung, or company that matches clients and translators. For this placement, you can choose between the following, incredibly German-sounding cities: Ulm, Mönchengladbach, Wuppertal, Duisburg, Bielefeld and… Bonn. You’ve googled nearby attractions and you’re looking forward to watching Euro 2012 in a beer garden, half-litre of Kölsch in hand. But the clock is ticking and, though you don’t want to think about it, there’s a problem: you don’t actually have anywhere to live.

That’s the situation I was in a few weeks before I left for Bonn. I joined studentenwg.de and wg-gesucht (househunting sites), sorting through flats by price, age, gender balance and location. Most of them wanted someone to rent for a whole year, or at the very least wanted to meet me before they’d agree to rent to me. With a week to go, I realised that it wasn’t okay to go to Germany with nowhere to stay, so I booked a room in the highly recommendable Max Hostel.

The day came, and I flew from Birmingham to Düsseldorf International, got a train to Bonn via Köln, got a taxi to the hostel, called my parents to tell them I was safely in Bonn, went out for something to eat, then curled up in a ball, rocking slightly and thinking: OH GOD OH GOD WHAT THE HELL AM I DOING HERE I WANT TO GO HOME.

Ten days later, I’m on a bus to Bad Honnef, where a nice lady in her 40s called Iris has a room free. She teaches yoga from her house, both in person and online over skype. The people in the hostel are interesting, like the Dutch PHD student in town for a few days to read one book about Beethoven in a restricted section of the university library for his dissertation. I’ve done a load of proof-reading in the office and even been entrusted with a translation (German to English: a list of ingredients on a packet of sausage). England have gone out of the European Championship on penalties. I’ve found Bonn cathedral, with the huge stone heads of two early Christian martyrs outside, and prowled round the multicultural Altstadt, doing my laundry in a public launderette, terrified that German Marla Singer will steal my jeans and sell them in a second-hand shop. The one thing I haven’t done is find a flat.

The bus takes 45 minutes and Iris meets me at the station. The train is quicker, she says, but more expensive. I have some misgivings about living so far from the centre of Bonn; Bad Honnef is a bit of a one-horse town, and I’d have to get up pretty early to make it to work. Iris shows me the two rooms that I could have; one, on the top floor, has no bed, only a mattress with blankets on the floor. The other, in the basement, has a bed, in a room dominated by what can only be described as a “nightmare wardrobe”, all gothic swirls and fading white paint. She has a cat, she says, and another lodger, a student from the university of Köln. I smile, stroke the cat, and say thanks but no thanks.

After ten minutes of walking I realise that I’ve gone the wrong way and the heavens open. I’m already fed up and this is pathetic fallacy turned up to 11; thunder rolls and the rain soaks me to the skin. Eventually, I ask for directions in KFC and find the train station. I try to buy a ticket from the machine, but the rain has soaked so far through my jeans and wallet that the 10 Euro note I pull out of my wallet is too limp and soggy for the machine, so I get on without paying, looking far too miserable to arrest.

The next day I talk to my parents on the phone. They think that if I don’t accept Iris’ offer, I should do what Jorge, the shy Spanish boy from my dormitory, is doing, and ask the hostel if I can stay for a few months. And I’m tempted; the placement’s only for three months.

But living in the hostel feels like giving up, and it’s not how the year abroad is supposed to go. You’re meant to move in with local people, have problems with rent and bizarre foreign bureaucracy. Anja, the Polish woman in her thirties, is bemused when I tell her that I haven’t actually put my own advert on wg-gesucht. I hadn’t bothered, thinking it was a sellers’ market, and almost as soon as I put it up it gets results. Ulrike from Bad Godesberg likes the sound of me and tells me that there are two free rooms in her house, but only for someone who’ll embrace living with others in a Wohngemeinschaft. Her rent is 350 euros a month and two hours’ work in the garden: plus everyone eats breakfast together at weekends, and each person has to make dinner for the house once a month.

If Ulrike’s terms are unusual, they’re still attractive. I go over one evening after work. It takes about 15 minutes to get to Bad Godesberg on the metro; it’s a small town in its own right, but much closer than Bad Honnef. Ulrike is about sixty, lively and knowledgeable about almost anything I care to mention. She shows me around the house in German, but switches to English to discuss rent and terms, insisting that she wants to be sure that I understand. She’s blunt at times, telling me she’ll find me unskilled garden work to do, and I have to remind myself that I’m in Germany. I’ll have a few flatmates, two men in their thirties and one of around fifty, and a couple who are moving on soon.

What really sells it to me is the garden. It’s a thing of beauty, with a long stony path, bushes on every side, a greenhouse and a glass pavilion at the end. Kira, the incredibly shy cat, prowls around, running away from anyone who looks at her. It’s the end of June, and for once it’s pleasantly warm, with no rainstorms or searing heat.

I tell her I’ll think about it, and the next day I meet student my own age called Winfried in the quaint-sounding university district of Poppelsdorf, but I keep thinking about the garden in Bad Godesberg. At the end of the conversation, I struggle to think of anything to ask him. He calls me the next day to tell me he’s found someone else he’d rather rent to. I call Ulrike.

I arrive late to see Germany slipping out of the European Cup to Balotelli’s goals and sign the contract. I tell the office triumphantly that I’m moving to Bad Godesberg. I’ve been in Germany for thirteen days, but now the Year Abroad has PROPERLY begun.

What are some good websites to find accommodation in Germany?

Have you tried this one: http://www.wg-gesucht.de/. It is generally thought to be very good indeed, and German students tend to use it a lot.

by Jack Nathan
Living and working in Germany

by Georgina Beardmore
Living and working in Germany

What to do when you arrive in Germany