Floridays: My Miami adventure so far 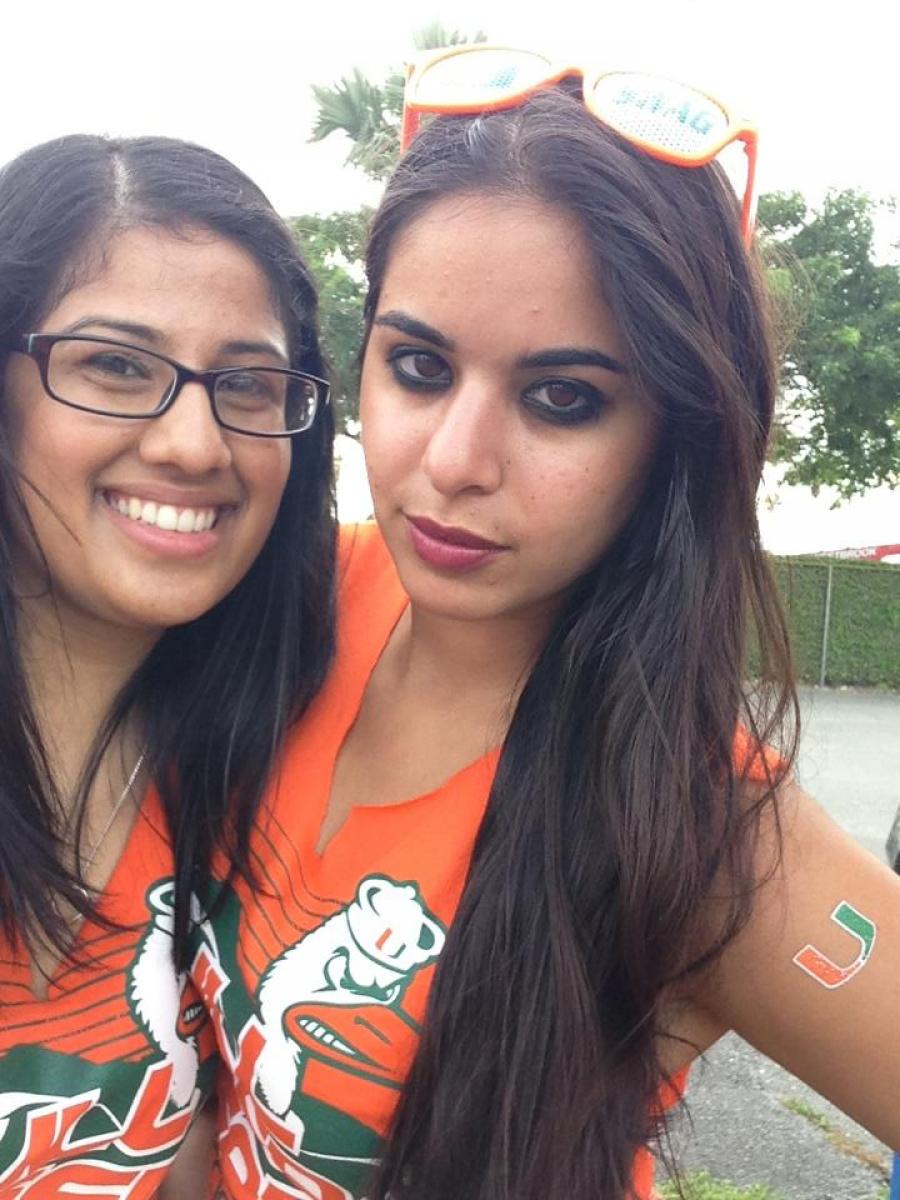 Tailgating - that's me on the right!

This article was written by layla haidrani, published on 21st October 2013 and has been read 3803 times.

Miami heat, palm trees everywhere and South Beach a mere drive away – no it’s not an advertisement, University of Miami is where I’m currently studying for the semester! Despite the warnings that the ‘American dream’ only exists in movies, having lived here for a month now it’s safe to say that they’re completely wrong! With a state-of-the-art gym, a brand new Student Activities Centre with picturesque views and a pool on campus where you can relax in between classes with brand-new friends, it’s a little hard to remember I’m here for university when the campus looks more like a beach resort!

The transition wasn’t difficult as I had expected but the first major difference I encountered was how much emphasis on sport and sporting games are placed at US universities. As the University of Miami football team, the Miami Hurricanes, has one of the best football teams in the nation, it is little wonder that so much importance plays on it and much attention is geared towards UM football players who are deemed demi-gods. Game day is usually every Friday or Saturday at Sun Life Stadium (if they are on home turf) and ‘tailgating’ is a ritual adopted by most of the student body and locals. For those unfamiliar with the tradition of tailgating, it is a social event outside the stadium where students wearing school colours (green and orange) begin the festivities at fraternity houses usually involving large consumption of alcohol and are taken by buses to the stadium for even more partying! The game itself is incredibly exciting (albeit overwhelming if you’re new to American football) and it’s incredibly hard not to get swept away in excitement! My most memorable game was when University of Miami won against our rivals University of Florida – tailgating began at 6am and we swept to victory in a nail-biting final!

In terms of academics, the University of Miami workload is definitely a lot more intense. Despite taking the same amount of classes in the UK, extensive reading beyond class is compulsory and homework is given pretty much every class alongside assignments. The American system also have mid-term examinations as well as finals, so it’s not hard to see why University of Miami (picture below) is well reputed among employers seeking for graduates. As I am really interested in gender studies, I am really glad at the opportunity to study it in greater depth and am getting involved in helping to set up a feminist society on campus. 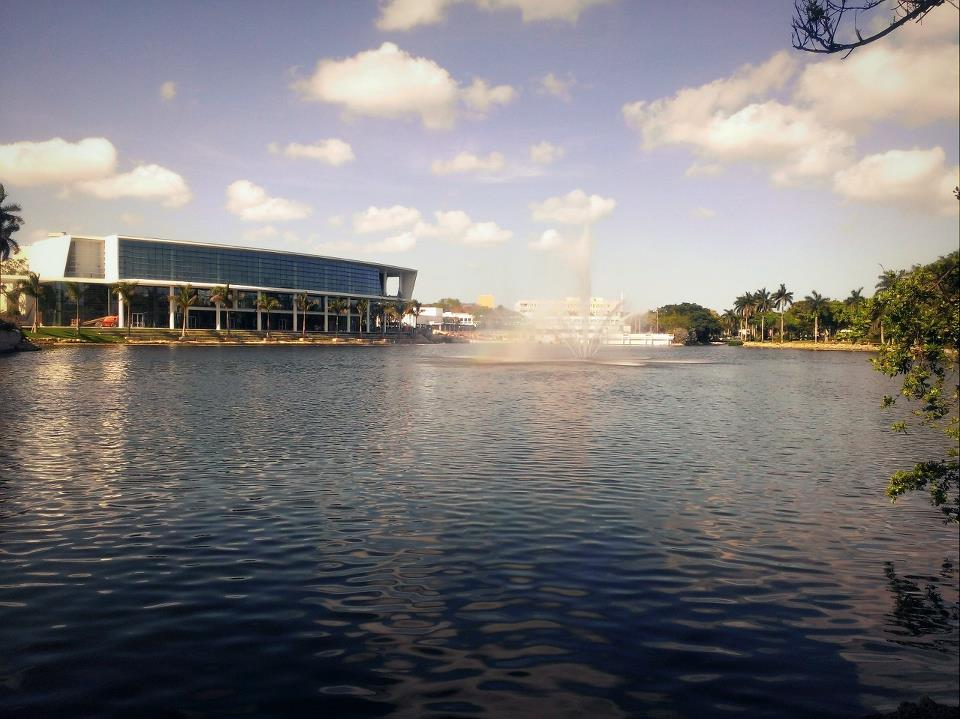 That’s not to say it’s all been studying though! In terms of the social side of college, the University of Miami knows how to party and definitely live by the motto ‘work hard, play harder’. It’s little wonder it got rated number one party school in Florida. Thousands of students usually flock to Thursday nights at the Grove, a street of bars, which is the only night the drinking age is 18. Fridays and Saturdays usually consist of an endless stream of frat parties, house parties and pool parties. A lot of emphasis is placed on Greek life and fraternities (yes they really do exist outside American movies!) usually host parties (think red cups, huge Greek letters outside a house where fraternity brothers stay on campus and beer pong) most weekends so frat row is usually buzzing with people. Be warned, fraternity parties only invite women, males are rarely allowed to enter. I’ve also been lucky enough to party in South Beach as I’m 21 which was an amazing experience and am definitely going to be doing that a lot more in the next few weeks.

The alcohol scene here however is very different to the UK. Alcohol is strictly prohibited all over the university, there are is only one bar to have a casual drink in (ID is required) and even adults in main streets of America are prohibited from openly drinking from an alcohol bottle. With the drinking age at 21, students usually resort to getting a fake ID. But for the most part, think back to how alcohol was purchased when you were around sixteen (paying people to purchase alcohol) and that’s literally what American students do. Furthermore, universities in the US employ Residential Advisors - think you’ve just escaped from the watch of your parents? Think again, US halls place an RA on every floor. They are there mostly to ensure that underage people are not drinking or that legal aged students are providing alcohol for younger people and are rather fond of busting house parties…

In terms of exploring Miami, I have been to South Beach most weekend, and have done the typical tourist exploration of Collins and Washington Avenue and have a trip lined up to Disneyland this weekend! I have also been getting involved in campus; I have started volunteering for Best Buddies (a project creating friendships with people who have intellectual or physical disabilities) and Kids and Culture (a student organization that strives to show students college is attainable, regardless of ethnicity or socioeconomic status) which has been very rewarding. These projects have been very interesting in seeing a different side to Miami and lovely meeting local residents. I have also starting writing for the Miami newspaper, The Miami Hurricane which has been very exciting. I am also hopefully going to be booking an electronic festival for Electronic Daisy Carnival Orlando in November if I don’t manage to blow it all on University of Miami paraphernalia at the bookstore…!

Now, I probably should get back to studying for mid-terms, those books aren’t going to read themselves are they?!

Preparing for a semester in Miami