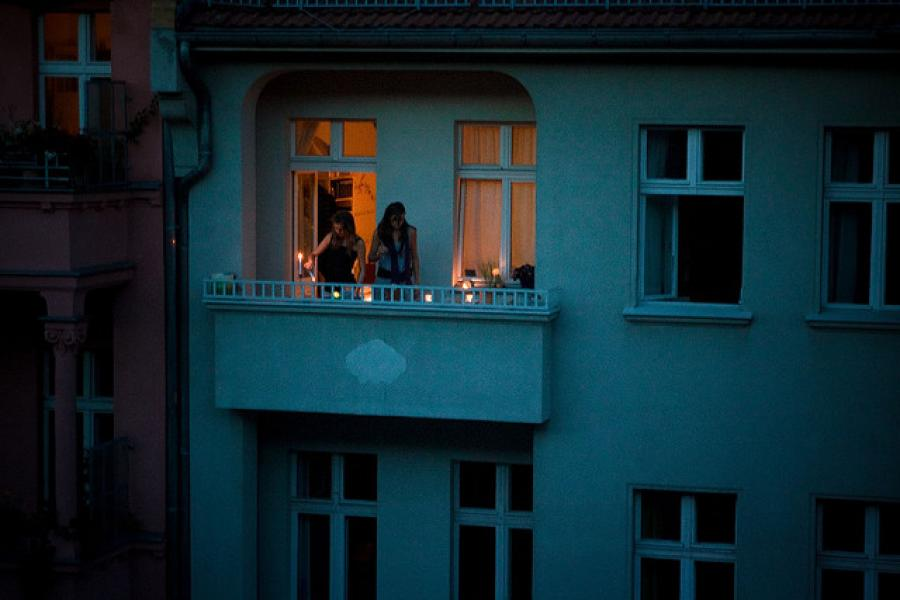 This article was written by Katherine Price, published on 14th March 2014 and has been read 26832 times.

Living and working in Germany Berlin Advice Study Abroad Accommodation Warwick Uni
Katherine is studying English Literature at the University of Warwick, and is spendign a year abroad studying English and German at the Freie Universität in Berlin to improve her language skills and experience the German culture. Here is her advice about finding somewhere to live in Berlin...

There are approximately 50-100 applicants per room in Berlin, a number that is increasing year on year. Trying to elbow your way to the top of the pack to make yourself stand out is exhausting. It’s hard, and it’s stressful. But you learn a lot from it. Having to speak and write German constantly for two weeks gave me the kick-start and confidence I needed, and I met some really lovely people along the way.

This will be your Bible. It’s really the only website to find a flat on, don’t waste time on other, smaller websites. I’ve tried them all: EasyWG, Craigslist, WGCompany, ERASMate, Sublet.com, Immoscout 24… Your best bet is WG-gesucht. Although it’s the most popular website, and therefore you’re fighting the most applicants, it also has the largest amount of listed flats by actual people, which also increases your chances.

Sent out fifty e-mails today? Send out more. Got seven flat visits this week? Keep sending out e-mails. And don’t just e-mail. If there’s a phone number, call it. Get a viewing as soon as possible before the room goes. I was spending about four hours on WG-gesucht.de every day. It really is that necessary. Get on the flat search as early as possible, even if you’re not flying out until July; flat-searching in April and finding something early on will get rid of so much of the stress.

Put up an ad. Get a German Handynummer ASAP and put that up there as well.

If they have a dog, mention how much you love dogs and would be happy to help with the walking. Vegetarian? I’m a great vegetarian cook. And I would love for you to teach me yoga sometime. Show an interest in what they have to say about themselves, show that you have actually read their ad, and you’re more likely to get a positive response.

This helps them to know you’re a real person and not a spambot*. They want to know who they’ll be sharing a flat with, after all, and it helps if you upload a few to make you look friendly and outgoing.

*Speaking of spam, watch out for this. You will get a lot of e-mails from people telling you absolutely every detail about the flat, sending you pictures, but, oh wait, sorry, they can’t show you the flat. They’re currently working in the UK. But if you transfer €800 over to them they’ll tell you where to pick up the keys… Alarm bells should be ringing here. Be careful. Do not pay any money for a flat you haven’t seen, to people you haven’t met, and before any contract is signed.

How long do you want the flat for? What are you actually doing in Berlin? This will save you time wasted travelling to a flat that is only available for a month when you’re looking for something to last you a year.

7. Talk about your hobbies

8. Decide what your limits are

If you just write in English to a German speaker they will immediately assume that you have no interest in their language, will make no attempt to speak it to them in their home country, and are less likely to invite you over for a viewing because of it. Make the effort! Write in German first and then English below. At least try to make initial contact in German, even if you have to resort to English quickly. At least you’ve tried. Although, if they’ve written their ad in English then it’s perfectly acceptable to write to them in English. They may be students abroad, too.

You may be desperate now, but if you commit yourself to living in a quiet, vegan household when you want to be going out every night and you can’t live without meat, you’ll be regretting it three months down the line.

Berlin is one of the cheapest cities to live in Western Europe. You should expect to find a nice flat for around €250-350, although as certain areas are becoming more gentrified, flat prices may rise rapidly over the next few years.

And where to look?

Berlin is a huge, incredibly diverse city. Where you should live really depends on what you are doing and where you are going to be spending most of your time, but it doesn’t necessarily have to be right next-door. Anywhere within the ringbahn (look this up, it’s the ‘circle line’ of Berlin) is central enough that will allow you to get to where you need to be, but is also central enough that you can go into the city without too much hassle on weekends.

Most students live east, flats are much cheaper and the areas around Alexanderplatz are all fairly cheap, student-y areas. Anything on the S-Bahn east of Alexanderplatz, on the U5, on the U2 east of Potsdamer Platz or the ringbahn around Schönhauser and Prenzlauer Allee are all very nice artsy areas with lots to do locally and are perfect for students. Further south-east around Neukölln isn’t known for being the nicest area, but there are nice flats and areas there, too. Every district has nice and not-so-nice areas, really. I lived in one of the nicest and most expensive districts of Berlin, Charlottenburg in the West, which wasn’t so much in the middle of the nightlife but it was an incredibly safe area. I had a beautiful flat that was still only €300 a month including bills.

If you are a student, you are most likely going to the Freie Universität or the Humboldt. The Humboldt is right by Friedrichstraße station, which is incredibly central and very easy to get to. The Freie is a bit more outside of the city, at a station called Dahlem-Dorf. Although the university is that far out, I would not recommend living that far out unless you are going to be spending a lot of time at the University, as it can be slightly isolating. Living West, especially on the U3 or U7, will cut your commute time in the morning, but plenty of people lived in the East and had no problems getting in. Transport links are good enough that you can really manage anywhere, take all advice with a pinch of salt and focus on ultimately finding a flat that’s right for you.

My final tips for survival

Most of them are way outside of the city, and are not as nice or as sociable as they are in the UK because students just don’t live in them.

Allow yourself a day off now and again to see the place you’re going to be living in. Remind yourself why you’re there or you’ll end up miserable and wanting to get the next flight home. Allow yourself your home comforts, talk to your friends, and make time for some new ones, too! I met so many great people whilst flat-searching, it would have been rubbish to let that go just because they didn’t pick me to live with them. Keep in touch with them, and even keep in touch with other flat-searchers you’ve met! A support group really can save your sanity.

by Emily Heath
Living and working in Germany

by Matthew Hepburn
Living and working in France