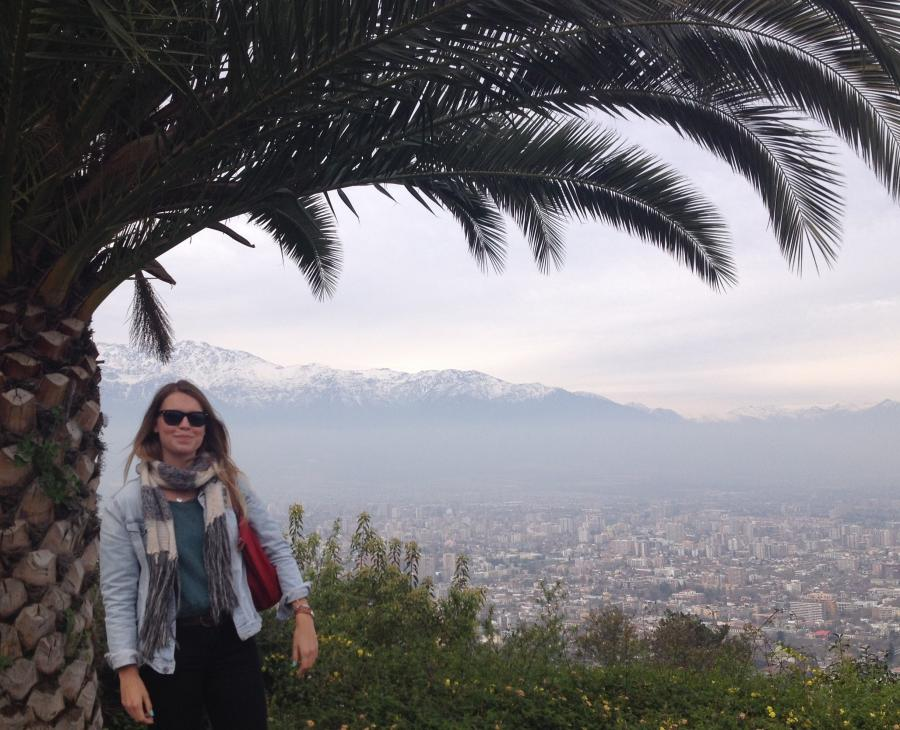 by Rebecca in Chile!

This article was written by Rebecca Combe, published on 5th January 2015 and has been read 8521 times.

Rebecca Combe studies French and Spanish Joint Honours at the University of Leeds. She is currently on her third year abroad, which she is spending in Santiago in Chile with the British Council as an Language-Assistant at a school. For more on Chile, check out Rebecca's blog!

1. The accent and slang

Before coming here I was only used to the Spanish accent, as I’d never been to South America before or even met many South Americans. I arrived in Chile thinking that my Spanish was at a good enough standard that I could understand pretty much everything. So it was a bit of a confidence knock when the first person I spoke to in Spanish upon arrival (the airport passport control man) couldn’t understand me and I couldn’t understand him. Especially worrying as all he said was ‘Hello! Your passport please!’… But my friends and I quickly caught up once we picked up on certain accent traits. For example, Chileans like to miss out the S’s in words and occasionally just miss out words in a sentence. They also speak very quickly and words jumble all together! When I speak to Chileans they’re always so quick to criticise their accent here, but I really like it! But I think I especially like it as Chileans themselves are very warm and friendly so that is shown through the way they speak!

Okay, so not only was the accent hard but there is LOTS of slang too. Ironically it didn’t matter that Chileans spoke so quickly as I wouldn’t have understood them anyway with all their slang! But fret not, as I have a prepared a short ‘Chilean Slang Survival Guide’ that will help you to communicate with every Chilean from the Atacama Desert all the way down to Patagonia.

The new key word to your vocabulary will be: Hueón/ Weón (pronounced Way-on). First things first, it can be a noun. When it is said to friends or someone close to you it means mate, bro, friend etc. For someone you don’t know and when you use it in a sentence to refer to that person, then it just means guy. However, it can also be used in a derogatory way and can mean arsehole, wanker etc. if used negatively. You can see certain conversational problems arising…

It goes on! Not only is it a noun, but it’s also a verb: Huevear/ Wevear! This means to mess around, screw around, take the piss etc. There’s even a masculine and feminine form: Hueón = Hueóna, Weón = Weóna! Finally (just as you thought that was it!) it can also be an object or a thing, referred to as ‘Wea’. Chileans like to use all three in the same sentence: “Porque estas weando con esta wea weon?!” which means “Why are you messing around with that dude?” Sorted! 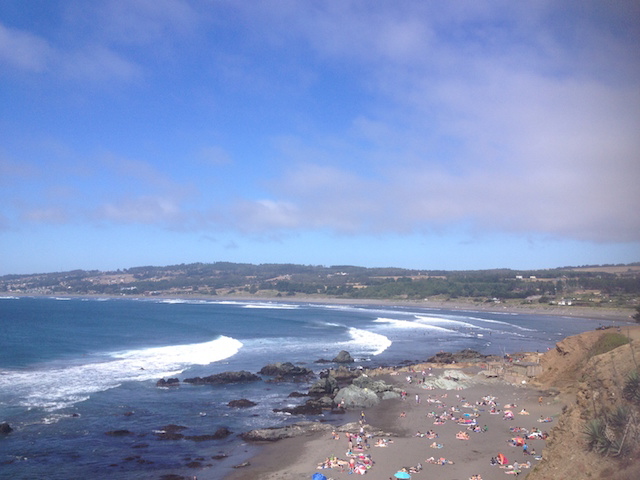 I think what I’m just about to write will only confirm further that us Brits are prudes and have a bit of a stiff upper lip… Either way, I think that anyone coming to Chile should know about it/ be warned.

I’ve been living in Chile now for 4 months so I’ve become more accustomed to the PDAs and at first I thought I was overreacting but once I chatted to my friends about it we decided there could only be two explanations. Either there are many more couples about here then at home, OR you just notice them more as they are constantly snogging. I hate kissing in public and find it really embarrassing, as I don’t want people looking. But in Chile there’s no shame and they even do it in the weirdest of places where lots of people are about. I can understand some romantic outdoor, public settings like a park or in the rain etc, but public transport doesn’t really spring to mind! Yes, you heard me - public transport. I use the Santiago Metro every day and now that its summer and scorching temperatures, it’s almost unbearable to stay on it for too long. But something about the sweat, smell and lack of space to move, attracts all the couples to make out right in front of you during rush hour on their journey to work. Sorry for my rant, I do genuinely think it’s quite sweet really that Chileans are so affectionate and loving! But I’ll always find the metro thing weird!

It’s true though! Chileans are very loving and this is shown in the way you greet people! At home there isn’t really a rule for greeting people for every kind of situation, so I’m always unsure as to just give a handshake, give a kiss, hug, or do all three! Luckily in Chile it’s very easy to pick up!

I thought you would greet people with two kisses, as that’s how it is in Spain – but no it’s just the one kiss! But only between two women, or a woman and a man, as two men just shake hands or hug. It’s so easy to see how close men are with the body language that they use. A light pat on the back is a “yeah, yeah, good to see you!” or a big hearty thump means that they’re good friends!

When saying goodbye I rarely hear ‘Adios’ as Chileans have adopted the Italian ‘Ciao’ but write it phonetically, ‘Chao’. They don’t really use ‘Adios’ as its quite formal and religious, as it’s literal translation means ‘To God’, so ‘May God be with you’. They also conjugate verbs in the Italian way, so instead of using the ‘as’ ending for ‘you’ they use the Italian ‘ai’. For example, ‘Cómo estai?’ which means ‘How are you?’ or ‘Dónde estai?’ which means ‘Where are you?’

Also when you answer the phone you don’t say ‘Hola!’ as you say ‘Aló!’ which always makes me giggle as they sound like they’re attempting a cockney accent! 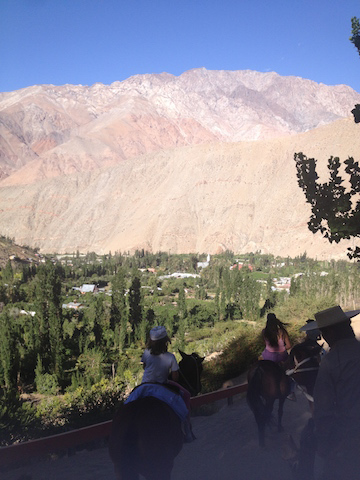 If you’re planning on coming to Chile anytime soon and you don’t have this app - download it now! You simply wouldn’t survive without it! Texting was all forgotten about once Whatsapp was invented, and every Chilean has it. I had Whatsapp before I came here and but I didn’t use it as often as I texted, and I definitely didn’t use it as much as I do now. I use Whatsapp to message friends and work colleagues, but the weirdest is Whatsapp-ing taxi drivers! That was a first! It’s actually a brilliant idea though and is very handy. I’m not criticising Whatsapp or Chile’s excessive use of it at all, I wish I’d used it more at home!

However, there’s one thing that I find a bit weird; the fact that sometimes instead of texting, they send long voice messages. This quickly turns into a conversation of voice messages going back and forth that can sometimes last quite a long time. So what I don’t get is why don’t they just ring each other??

Chile’s summer season is December through to March, so I am just about to go on my summer holidays travelling around Chile and South America.

I live in the capital city of Santiago, which is the size of London with a population of 8 million. It’s huge and is buzzing with culture and things to do and see! My favourite part of the city is the breathtaking Andes that adorn its skyline. It’s so easy to get to them too, to go hiking or camping, and there are lots of outdoor activities to do like horse-riding, rock climbing and rafting!

Chile is 2,653 miles long so it has plenty of coastline and many beaches! I’ve been to a few now and they’re so beautiful!

In the summer I will be going to southern Chile where I will be visiting Lakes, Volcanoes, Glaciers and National Parks! I’m then going to the North of Chile where I’ll be trekking through the famous Atacama desert and visiting the Salt flats on the border with Bolivia. So I really feel like Chile has it all!

I’m loving my time in Chile and would recommend it to anyone thinking of taking a year abroad here or even just as a travel destination. You won’t regret it! 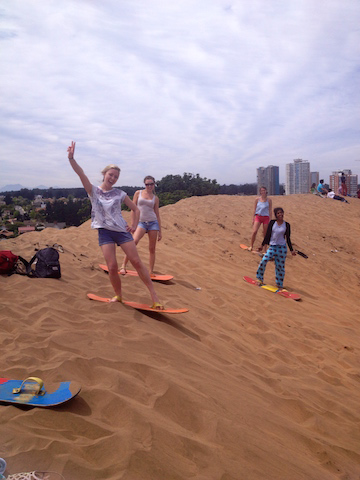