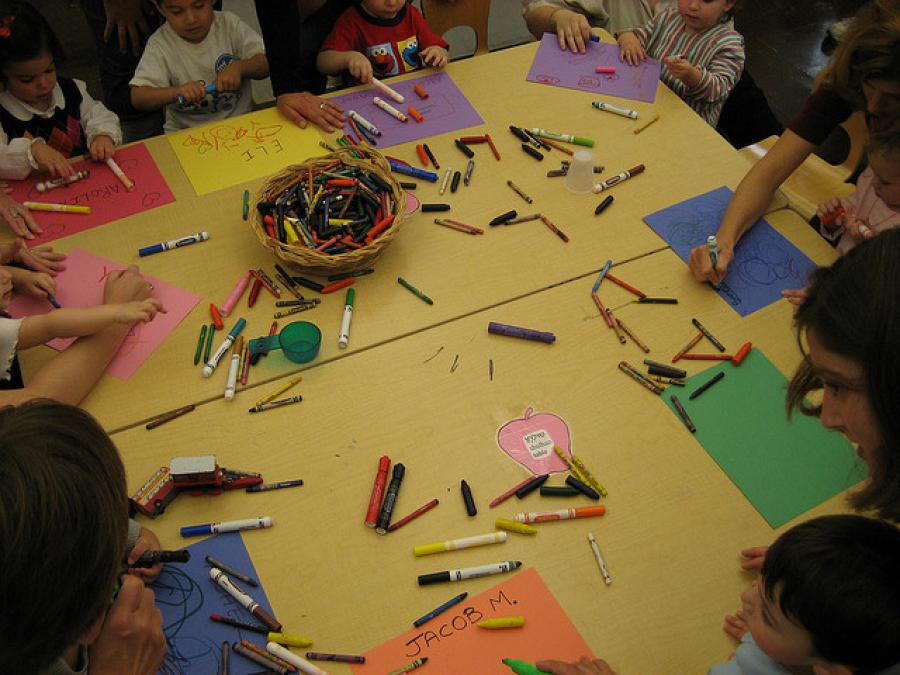 Back to school! by finalgirl

This article was written by Global Graduates, published on 1st October 2013 and has been read 30427 times.

I started at 9.45am, 2nd class of the school day. No worries about getting there as I went to the school yesterday to explore and be shown around by the coordinator Teresa, and introduced to everyone whilst I smiled, nodded and pretended that I actually did understand every word being said to/about/next to me. Everybody was very friendly though.

Today I arrived for my 9.45 start at 9.35, and went to Teresa’s office ready to begin. She showed me around another building which turned out to be the infant and younger years’ building, and I had my first class with the second graders. Interesting to say the least. Chaotic might be a better word. The poor teacher was good, but there were 27 young children in the class – she was vastly outnumbered. Also, despite being a “bilingual” teacher, her English wasn’t great. It was fine, but not great. This obviously gathers no purchase for me, since I’m already pretty fluent in English and don’t require much more tuition in that area. But for the kids it could present some problems later in school. They were all obviously adorable, with one coming to me as soon as I sat down, showing me a cut on his knee with what I believe was pride. Another asked me in the cutest Spanish accent “Can I go to the toilet please?” – I couldn’t think of a way to say “I don’t really have the authority to answer that” in a way he’d understand.

What really surprised me though was the difficulty of the english that these kids were learning. Stuff about the respiratory system, breathing and about healthy eating, all in English. It took the teacher about 10 minutes of repeating and huge gestures to get the children to understand when she said “It is good when I breathe in through my nose, when I breathe through my mouth, my throat hurts and I get a cold.” It seemed very advanced for 7/8 year olds. I also had to read some passages out for them to repeat. They didn’t understand me one bit; what followed was a lot of mumbling!

After two of those classes with the same teacher, I went to an older class, a class of 4th graders. What a change. The teacher reminded me of Miss Trunchbull, but looked like Miss Honey. She spoke with an eerily soft voice, so quiet I could barely hear her. She got me to introduce myself (my name “Mish” is causing a lot of problems) and then each child in turn introduced themselves. That was the end of my part. The teacher then told me that for next week she wants me to prepare a presentation or some other form of activity about the human skeleton for class. I was just thinking CRAP. I know barely ANYTHING about the human skeleton! Luckily she gave me photocopies of their book to prepare with! Thank God for that. The remainder of the lesson consisted of me watching in awe as the children talked about the respiratory system in great detail in English and Spanish, and then the bloodstream and things like that, Amazing. I also watched as the teacher wrote things on the board like “the blood carry ___ to the ____” which was never going to make sense and “The stomach is mashed and sent to the intestine.” Hmmm. I did not feel it would be lucrative for me to point out these errors in class to the teacher, so I left it, mostly out of fear. The lessons are only 45 minutes long so after that it was break time, so I went to the staff room (I’M ALLOWED IN THE STAFF ROOM – can’t believe I’m technically a teacher) where it was one of the teachers' birthdays so there was an amazing spread of pastries both savoury and sweet. And a whole lot of cake. The main teachers I talked to were the P.E teacher, Sergio (of course – he looks like a Sergio too) and another bilingual teacher, forgotten her name. They are all very friendly so I think I will be fine!

Tomorrow I start at 9am, with a 6th grade music class. Now I play the guitar and piano for pleasure, and have a working knowledge of sheet music but God knows what I’m going to have to do! Wish me luck!

Boyfriend coming with me to Spain on my year abroad?

Hi, I did this! My boyfriend came with me when I went to France to study for 6 months and also followed me for the following 6 months to Vienna, where I was a teachint assistant through the British Co...