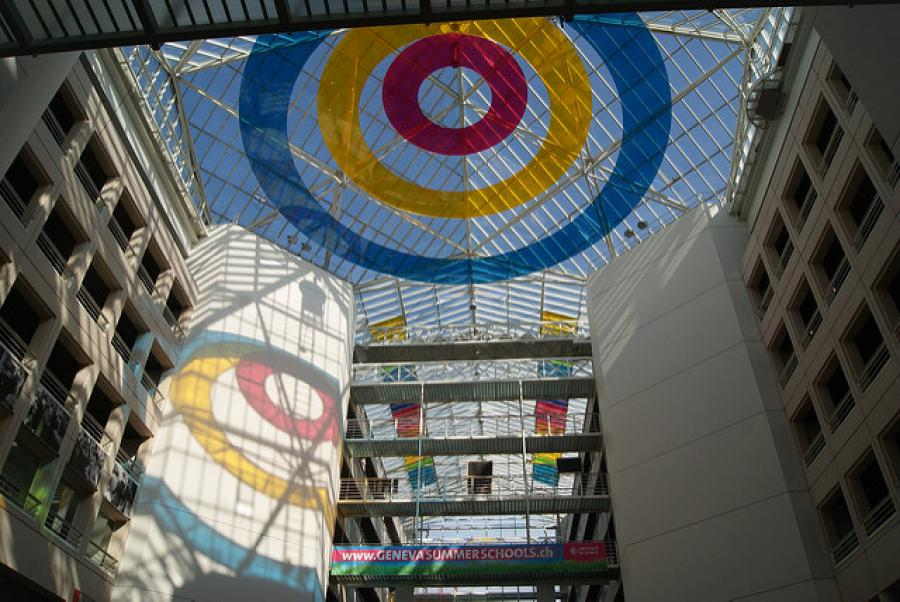 Geneva University by Jack at Wikipedia

This article was written by Emily Maybanks from Swansea University, published on 18th August 2016 and has been read 5832 times.

Before I came to Switzerland for the second placement of my year abroad, I was doing some research about extracurricular activities which I might like to do alongside my studies at the University of Geneva. To my surprise, I found the perfect one: a creative writing course. Having been a passionate writer since I can remember, I just knew that I had to take advantage of a creative writing course, and it made the prospect of studying and living in Geneva even more excited. Even though the course has been taught in English and all of the writing I’ve done has been in English, it has been extremely enjoyable and it’s given me a rare opportunity to learn more about something that I’ve always loved to do and been passionate about.

Fortunately, and unfortunately, the course wasn’t very popular. It’s good that the group was small because it meant that we got a lot of focus and feedback on our work. However, it did upset me a little to start with that there weren’t many keen writers in Geneva. The course focussed on fiction writing, which is a style of writing that I’ve never felt particularly confident about and any fiction writing that I’ve done in the past, I’ve kept private.

In the first session, we read the first ten pages of a novel called 'How To Be Both' by Ali Smith, and our task has been to write a continuation of the story. Personally, to start with, I found this extremely challenging because the style of writing in the book was very different to any book I had ever rad or anything that I had ever written, but once I realised that we could take the story in any direction, I really got into it. I’ve been working on it ever since and I’ve been given so much praise on my writing that I’m surprised my head hasn’t exploded… I’ve also been given a lot of feedback on how to improve. Furthermore, it’s been interesting to have my writing read by non-native speakers of English as well as to read work written by non-native English writers.

Most recently, I’ve started writing another piece of fiction which is going to look at leaving for a year abroad and the emotions and challenges involved in a year abroad. Usually, it would be something that I would keep private and not let anyone read, however I took it along to one of the creative writing sessions despite being apprehensive about doing so. When it was read out loud in the session, it was hard not to think about it being my work but it turned out I had nothing to worry about as they both loved it and wanted to read more, and they both gave me insightful feedback about how I could make it even better.

So, what have I gained from doing this creative writing course? I feel as though I am a better and more confident writer of fiction, which is all I could have hoped for. Furthermore, I have never been more proud of my own writing until doing this course and I think it’s because I’ve been brave enough to share my work despite being scared that no one would like it and then I’ve been proved wrong. In my opinion if someone says they want to read more, it’s the best praise ever. Also, it has heightened my dream of having a novel published in the future, and I’ve made two excellent friends.

3. Other activities you can do

If anyone is going to spend some or all of their year abroad in Geneva, I would definitely recommend the creative writing course. However, creative writing isn’t the only activity you can take part in. In fact, there are so many activités culturelles to choose from; art, photography, writing, theatre, dance, cinema and music. There are also a variety of sports to choose from such as Zumba, yoga, horse riding, tennis, walking, karate and judo. Furthermore, it’s not only students who can participate in these activities but also members of the public, therefore even if you’re doing a work placement in Geneva, you can still join the cultural activities or sports clubs.

Here is a list of cultural activities, and a list of sports, that are available in Geneva. I would recommend taking part in an extracurricular activity because it is a great way to develop skills or learn something new whilst making friends and having fun.