Home Articles “Break a leg!”: Expecting the unexpected on your Year Abroad
Share
Tweet
Write for us 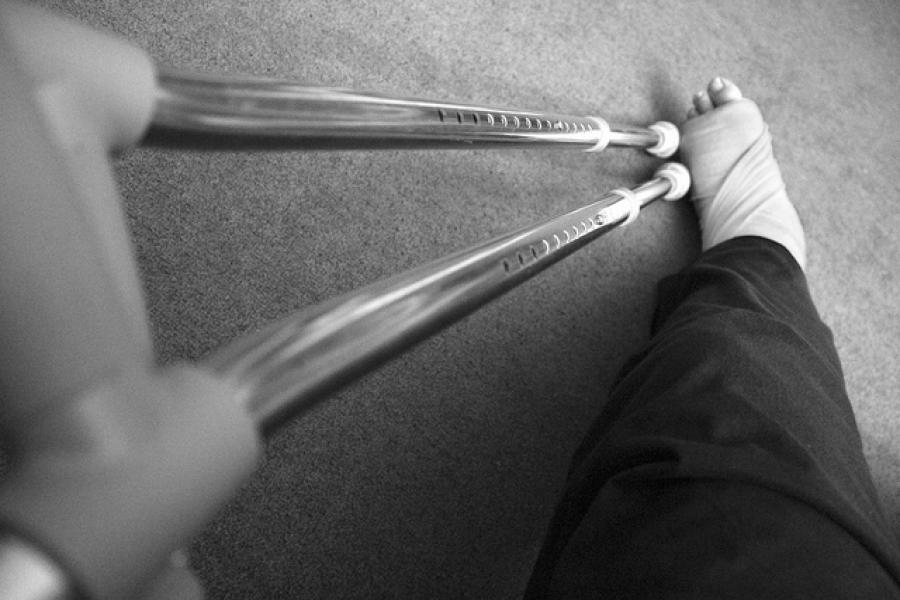 This article was written by Marianne Thomas, published on 19th July 2014 and has been read 4654 times.

You’re just a couple of weeks away from finishing your fabulously French year abroad and jetting back off to la belle Blighty. You’ve somehow evaded the clutches of so many dreaded Erasmus illnesses, and have no reason to doubt that you will return home in one piece when suddenly – crash, bang and even wallop – the unthinkable happens, and a limb that was functioning perfectly well a minute ago has decided that it needs some poorly-scheduled time off. Not exactly the way that you envisaged going out with a “bang”.

Unfortunately, this was precisely how my year abroad in Lyon last year came to a stuttering, limping end. A simple slip on the stairs, and suddenly my travelling plans were cancelled, my final get-togethers curtailed and my severely sprained (though miraculously not broken) ankle put into an up-to-the-knee plaster cast for the remainder of my time abroad. Oh, and did I forget to mention that because my blood pressure shot through the roof, I also had to inject myself every day? (Insert sympathetic “aww” here).

Basically, there’s no doubt about it: having an accident sucks, but having an accident when you’re stranded in a foreign country sucks even more. However, accidents happen and aren’t particularly discriminatory about where they incapacitate you, so it’s often best to be at least a little bit prepared. So -not to be too pessimistic - I’m going to impart a bit of my war-wounded wisdom with you, in the hope that you will be able to learn from some of my mistakes if the worst should ever happen (which I really hope it doesn’t).

1. If you don’t have one, get an EHIC card before you go.

This is clearly an obvious one and something that has been covered in so many ThirdYearAbroad posts already, but really, never ever underestimate how important this one is. If you prance through your year abroad EHIC-less but with nothing more than a common cold hampering your fun, then well done, you’re pretty much home and dry. However, a serious accident without insurance could cost you an actual arm and a leg (maybe) and result in you sacrificing money on needles and bandages which could have paid for a post-uni trip to Timbuktu. So just get one and make sure it’s up to date before you fly.

2. Know the emergency numbers of the country you’re in.

The standard and general emergency number for continental Europe is 112, but the numbers relating specifically to ambulances, police and the fire brigade often vary from country to country. You can’t ever go wrong with knowing all three of these in addition to the general hotline.

3. Know where your nearest hospital is.

This one’s something that never occurred to me, but ended up being pretty important. After having my accident at 11 o’clock at night, it struck me that I had no idea how to go about getting myself to medical help. I wasn’t screaming in pain so didn’t really feel that calling an ambulance was entirely warranted, and naively hoped that the ridiculously-huge swelling on my ankle would go down by the next morning. If not, then I would check myself into a hospital… which I unfortunately didn’t know the location of. Forward planning is never a bad thing and google maps is so easy to use that really, I had no excuse.

So if you’ve made it this far accident-free, then congratulations! But just in case you feel a skiing collision coming on, you might want to have a look at this next bit…

Some of these will be easier to do than others and will depend on how serious your accident is, but if you have a bit of time to spare before your jaunt to A and E, try to get a few of these done (or ask a very kind friend to do them for you).

“To a hospital?!” I hear you ask incredulously. Yes, a passport is never a bad idea, especially if, despite living in the country for six months, you are still yet to receive your national identity card, as was my experience. Having ID on you will make the imminent hospital bureaucracy a lot smoother and easier to deal with than if you end up getting categorised as a UAP (Unidentified Anglophone Person).

2. If you have a leg injury, take some spare bottoms just in case.

This is also one that – understandably, I think – sort of slipped my mind, but going to the hospital in skinny-ish jeans and then unexpectedly needing a plaster cast ended up being a bit of an issue (unless I wanted said jeans to sport a snazzy new side-split). This is where a good friend will come in handy, so if you have one, now is the time to ask him/her very nicely to please run home and fetch some jogging bottoms for you. It’s also better to do that before the doctor tells you that it needs to be done. European hospitals aren’t always big on giving out gowns to cover your modesty, and you could end up sat around half-dressed while passing doctors casually float in and out of your waiting cubicle, which frankly just results in uncomfortable bonjours all over the place.

3. Brush up on your medical vocab (including the foreign names for any medication you may be on).

Never learned the word for “slipped” in school? Nor how to say “I heard the bone snap”? Well more fool you, because now is judgement day. Remember that, especially if you’re situated in a rural area, you’re going to have to explain what happened to you in the local language while also being in a potentially high state of shock and pain. Great, huh? Again, take the very kind friend we talked about earlier or, if your state of shock and pain isn’t that high after all, then you can do it, and word-reference like crazy all the way to the hospital. Then, when you get there, you can deliver your exciting “this is how it happened” story like a pro and there will be no doubt in the doc’s mind that yes, you really did break your kneecap by slipping on some spilled Beaujolais whilst partying with François Hollande. Oh, the Erasmus life.

And lastly, when you get to the hospital

There’s only one golden rule here…
1. Remember that patience is a virtue, and that this might just be your big test.

I am not always the most patient of people, and, convinced that my injury could not possibly be that serious (I slipped off one step for goodness’ sake), I was ready to get up and go and fix it myself after a few hours of idling around a French A and E. There is no excuse for this other than my chronic impatience and I’m sure the fact that none of you would be nearly as stupid as me will make this irrelevant, but just remember that each country has its own way of doing things and some systems may take longer than others. In any case, you’re at that hospital for a reason, so you’re going to have to wait your turn. And what’s more, you’ll probably get chatting to some people in the waiting room anyway. What excellent practice for your target language – it makes you wonder why on earth you didn’t do this accident earlier!

Phone insurance: your need to know