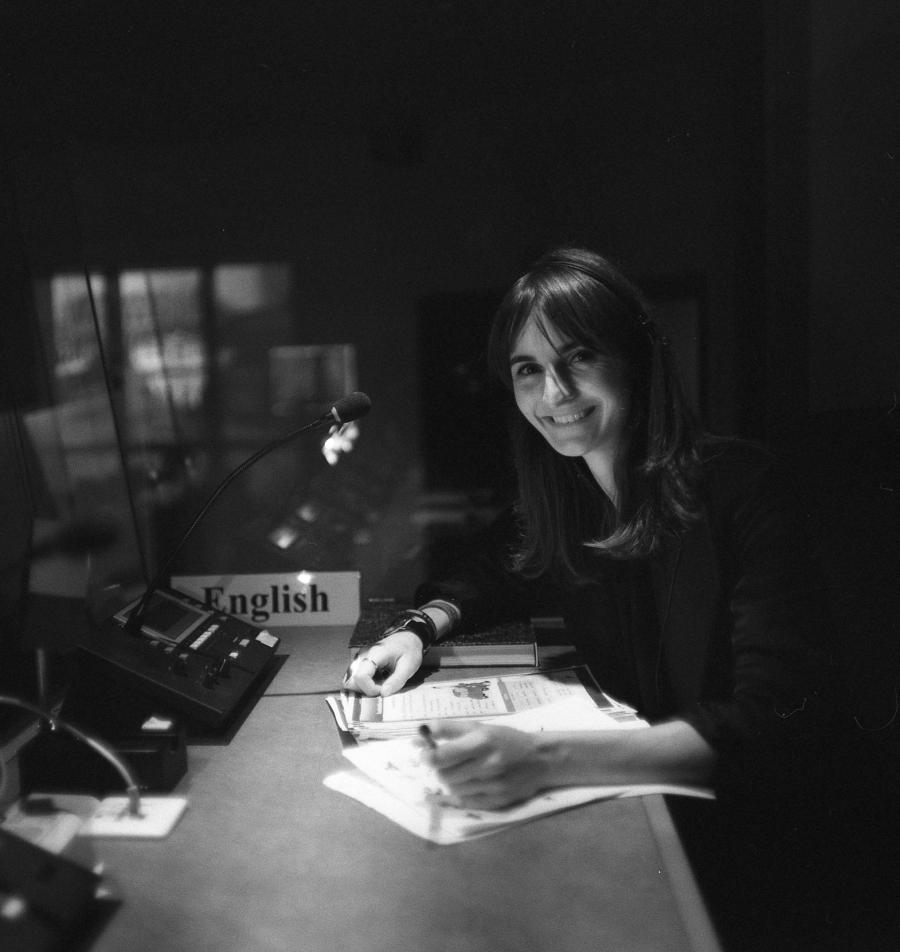 This article was written by Alexandra Ionescu, published on 26th October 2015 and has been read 2589 times.

In this interview, Alexandra Ionescu gives us an insider's view into life as a Conference Interpreter.

1. What is a conference interpreter?
A conference interpreter is a language professional who simultaneously or consecutively interprets statements made in a conference or a meeting. An interpreter works from their passive languages into their mother tongue(s). A sound knowledge of 2, preferably 3 foreign languages is key. An ability to think clearly under pressure is essential. International organisations have the necessary infrastructure to provide interpretation from and into all their official languages.

2. Is there such a thing as a typical conference interpreter?
Not really, no. The one thing that unites us is the commitment made to learning and keeping up a sound knowledge of our foreign languages. You can’t tell if someone is a conference interpreter just by looking at them, but you will certainly be able to tell it from that person’s ability to amaze you with all the weird and wonderful knowledge they have about current affairs and the latest neologisms.

3. What did you study at university? Did it involve a year abroad?
I studied Spanish and Portuguese with EU studies at the University of Edinburgh. My degree involved a third year abroad, which in my case was divided into two 6-month consecutive stays in Coimbra, Portugal and Salamanca, Spain. I had a brilliant, inspiring French teacher at school, so I wanted to keep up my knowledge of French as well as learning a new language, which for some reason had to be Portuguese. I didn’t know what a ‘language combination’ was, or that I wanted to become a conference interpreter until my fourth year at university, when I had to put some serious thought into what I was going to do after I graduated. Not one to take an easy way out, I opted to explore further the intricacies of language through conference interpreting. I wasn’t expecting to do this abroad as well, but that’s how things turned out.

4. How did you start working for the EU?
After I graduated from Edinburgh, I went to Lisbon to gain some work experience, having secured a place on a postgraduate conference interpreting course at a UK university after passing their aptitude test.

As things turned out, I ended up staying in Lisbon to complete the course there, and then applied to sit an inter-institutional accreditation test in Brussels. Passing this test was my gateway to working for the EU institutions. There is a network of universities across Europe, providing good conference interpreting training. This, in combination with pedagogical assistance from staff interpreters from the institutions, means that the brightest and best young linguists can have the opportunity to pursue a career in conference interpreting.

5. What is your current role? What does it involve day to day?
I spend every day preparing for meetings and interpreting in them, in the booth. Preparation is very important, as the level of difficulty between meetings can vary considerably. I always take my notebook with me.
Depending on how much preparation I have done ahead of the meeting at home, I arrive earlier or later, but always before the official starting time of the meeting. I plug in my headphones, check through the documents, check if there are any languages that have to be taken on relay and, most importantly, check things through with colleagues. Then, when it’s my turn to interpret, I switch on my microphone and speak, having processed, in a matter of seconds, the content of the speech coming through my headphones from the meeting room.

6. Have you been able to work abroad during your career?
Becoming a conference interpreter has redefined my understanding of the term ‘abroad’. Technically, not only is my professional domicile ‘away’ from home, but it is also the place from which I travel when I have to interpret in meetings organised by other institutions, or in other Member States.

7. How important are languages to your role?
Language skills are essential in this job. The EU is committed to multilingualism and is likely to remain attached to this concept in the future as well. It’s important not to underestimate the benefit of learning foreign languages in the first place though. There are many options available for people with a flair for languages, so this is just one branch, one career path that one can follow. Languages are important to my role only because languages are important to me as a person. I don’t think I’d be doing this job if I didn’t relish the opportunity to work with languages and put these skills to good use in such a challenging way.

8. What is your biggest tip for someone interested in working for the EU?
As a conference interpreter based in a city such as Brussels, one can work on a freelance basis and therefore have many more clients in addition to interpreting for the European institutions. The EU is the world’s largest conference interpreter employer (of staff and freelancers), so Brussels is a good place to start. Candidates applying for an accreditation test should ideally have a sound knowledge of 2 or preferably 3 foreign languages. The first step is an accreditation test. For that, one must practise, practise, practise. A potential candidate’s interpretation skills are just the tip of the iceberg though. One way to boost these skills is to keep up to date with current affairs. There’s also no excuse for not brushing up on one’s knowledge about the EU institutions.

9. What has been the biggest challenge of your career so far?
The biggest challenge was probably to get started in the first place. Embarking on a conference interpreting course is a special choice in itself. On top of that, during the course, one must endure long training sessions and develop a thick skin when dealing with feedback. Then there is the challenge of working from more languages and coping with increasingly varied and complex subjects. I feel as though I am constantly expanding the boundaries of my memory.

10. What is the best thing about your job? And the worst?
The best thing about this job isn’t actually a thing. It’s without a doubt the colleagues. Meetings or conferences come and go, you can have a good day or a less fortunate one, but the people are there to stay. Then there’s the fact that there’s no such thing as a typical week in conference interpreting even if over time there is continuity in terms of the meetings covered. This diversity is quite exciting. As a beginner, you have a limited knowledge of how terminology is used in practice in different contexts, but over time, these pockets of knowledge expand. I guess that’s what they call ‘experience’. It’s a very satisfying process.

The worst? The first few years are crucial when it comes to survival in the profession. You have to keep training and practising in order to preserve the skills that you worked so hard to acquire, as they can so easily vanish with just a few months of inactivity. You have to reconcile conflicting feelings. On one hand, there’s the sense of achievement. On the other, there’s the feeling that you’ve never really ‘made it’, as each day is a new beginning and each time you switch on the microphone you have to be ready for anything.

11. If you could describe your working life/career in 3 words, what would they be?
Time well spent.