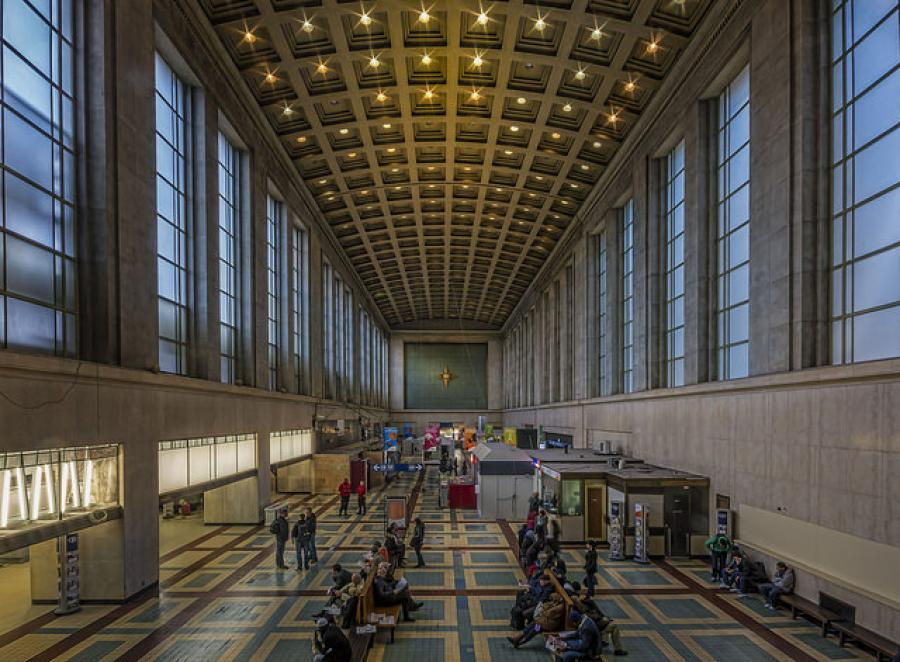 This article was written by Alice Hagger-Vaughan, published on 19th May 2015 and has been read 13239 times.

Alice Hagger-Vaughan is a 'Blue Book Stagiaire' on the European Commission Traineeship. In Alice's words, this is what it's like to work at the Education, Audiovisual and Culture Executive Agency.

1. What did you study at university? Did it involve a year abroad?
I studied Politics and German at the University of Leeds and for me, having the opportunity to do a year abroad was the biggest factor in my decision.

I spent my year abroad as a British Council English Language Assistant in a small village in Austria, just a two minute walk from the Slovenian border. I worked in three different schools and had the time of my life, living in the beautiful Austrian countryside during the week and in the vibrant city of Graz at the weekends.

Before university I spent 5 months in South America, including 3 months living and working in Peru where I gained an interest in development issues and learned Spanish. My Spanish abilities meant that I was able to volunteer in Peru for another two months straight after my year abroad, by the end of which I was a total work abroad convert!

2. How did you start working for the EU?
I was looking for opportunities after university which would allow me to use my languages, as I was really keen to live and work abroad again. I was told about the Traineeship at the European Commission by a Commission translator, and was encouraged to apply because of my language knowledge and experiences living abroad.

The traineeship is not as famous in the UK as it is elsewhere, but twice a year the commission takes on around 600 trainees from the EU as well as a few from non-EU countries. Each trainee is assigned to a unit within a DG or Agency based on their interests, academic record and work experience. In that unit they contribute to a huge variety of tasks, whilst learning about the European Commission and how it works. It is a fantastic opportunity for anyone interested in EU affairs and for British graduates, it offers a unique experience to contribute to work being done on issues that affect us on a daily basis in the UK.

3. What is your current role? What does it involve day to day?
I am what they call a 'Blue Book Stagiaire' which means I am on the official European Commission Traineeship. I work at the Education, Audiovisual and Culture Executive Agency, set up by the Commission to manage its programmes in these fields, in the Unit Erasmus+: Higher Education – Erasmus Mundus Joint Master Degrees.

I am assigned to the sector dealing with mobility through education projects between the EU and non-EU Higher Education Institutions. Every day is different for me. My tasks involve anything from creating graphics, analysing reports and proof reading documents to attending meetings within the Agency and at related DGs.

In addition to my role in the office, as a Stagiaire I am involved in a huge variety of extra-curricular activities organised through the traineeship. There are always lunch time conferences on a range of topics and evening events where you can meet trainees from the other DGs. I am a member of the Solidarity sub-committee which raises money for development projects, but there is something for everyone's tastes - the Belgian beer tasting committee is a particular favourite…

4. What has been the best part about working abroad?
I work and socialise with people from every corner of Europe and beyond and for me this is by far the best thing about working internationally. My experiences abroad in the past have given me the opportunity to meet people from all walks of life and to learn about a diverse range of cultures. In Brussels, the intercultural interaction that occurs on a daily basis is on another scale and is a very enriching experience, both personally and professionally.

5. How important are languages to your role?
Every day I am amazed by the number of languages being spoken in Brussels; it is a truly multilingual environment. I speak German, good Spanish and my French is improving but as a Brit, sometimes people outside of work question 'why' I bothered to learn a language, let alone three (everyone speaks English right?). When I come to work I am reminded why and whilst a lot of my work is in English, meetings are often multilingual and I communicate with different people in multiple languages all the time.

Whilst it is most definitely an asset for the EU to be a native speaker of English, the ability to speak other languages actually enhances its value. Speaking other languages helps you to understand your own language much more deeply and this is hugely important for communication in the office and for my role in general. In fact, languages are considered so important at the Commission that all employees are encouraged to learn new ones through courses and language tables organised by the institution.

6. What's the best piece of advice you've received? Who was it from?
The best piece of advice I have been given (apart from 'the yellow vans have the best waffles') is to ask as many questions as possible, to as many people as possible. It sounds simple but it is easy to feel ignorant if you ask too many questions. It was a huge learning curve for me, but since working at the Commission I have learned that asking questions isn't a sign of weakness or ignorance, but rather shows a willingness to develop and grow professionally.

7. What is your biggest tip for someone interested in working for the EU?
Learn a language! It truly is the key to success in the EU and is highly valued in the Commission. I know for me the best way to improve has been to just get out there and start speaking. In Brussels, speaking 4-5 languages is almost considered normal so you're never short of someone to practice with!

8. What has been the highlight of your career so far?
So far, for me the biggest highlight has to be my first day on the traineeship, sitting in a room with all 600 trainees and realising what a huge achievement (there were 16,000 applicants!) it was to be there.

9. What has been the biggest challenge of your career so far?
The biggest challenge has been recognising my own abilities and strengths amongst so many other talented people in the Commission. Before I came to Brussels I thought maybe I would be under-qualified or that my own language abilities wouldn't match up. I have realised, however, that everyone working here has something to contribute and a different perspective to offer, including me.

10. What is the best thing about your job? And what's the worst?
I have never learned so much in such a short period of time. It is extremely rewarding going home every day feeling like I have gained knowledge in an area that beforehand I knew very little about, from experts in their field. I have to say it is even more fulfilling working on an Erasmus Mundus programme, as this is something people from all over the world have heard of and have benefitted from, so I feel part of something that has a positive impact worldwide. As for the worst part... the coffee could definitely be better.

11. If you could describe your working life/career in three words, what would they be?
Challenging, Rewarding, Inspiring

John is a Translator for the European Commission