Home Articles EU careers insider: My first months as a British trainee in Brussels
Share
Tweet
Write for us 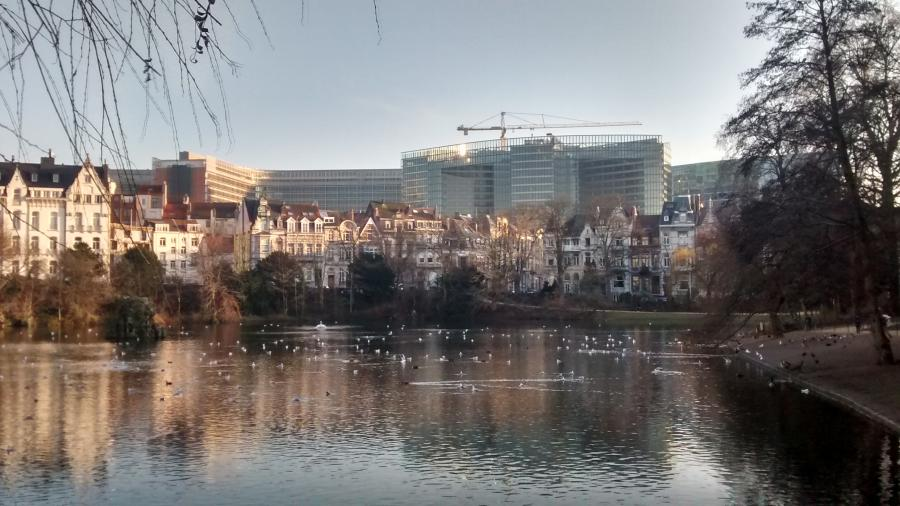 The second in our series of EU careers case studies focuses on a British trainee in Brussels! Katie Low is an Oxford graduate who is currently undertaking a traineeship at the European Economic and Social Committee. Here's how she's found her first couple of months in Brussels! If you want to follow Katie's EU career, check out her blog.

1. Background
I’m 29 and spent most of my twenties in Oxford, acquiring undergraduate and postgraduate degrees in Classics and then working as a part-time lecturer. But I had always had a longstanding interest (originally sparked by childhood holidays and European family connections) in the world across the Channel, and during my doctorate I was able to spend a year in Paris as an exchange student. In the summer of 2014 I decided to move out of academia and instead pursue my European interests further.

One of my first steps was to apply for a five-month traineeship in an EU institution.

Each scheme runs twice a year, with one intake in the autumn and another in the spring, and has a separate online application procedure. Once shortlisting has taken place, pre-selected candidates have to e-mail in proof of their qualifications, linguistic abilities and experience.

The process lasts several months and there’s not much official information available about what the institutions are looking for, beyond the basic criteria of a first degree and at least some knowledge of two of English, French and German, the EU’s working languages. I think the fact that I had studied at postgraduate level and spent time abroad may have helped, but this certainly doesn’t apply to all trainees. I have heard repeatedly that native English-speakers are sought after, so if you meet the minimum requirements I would strongly advise you to apply!

Ultimately I decided to take up a traineeship offer from the European Economic and Social Committee: one of the EU’s constituent bodies, which provides a forum for employees, employers and other social and economic interests from across the EU, advises the Commission and Parliament, and takes an interest in wider civil society issues. Its 353 members, drawn from the 28 member states, meet for plenary sessions nine times a year. I arrived in Brussels in mid-February 2015, full of excitement but not knowing a great deal about what my role would entail... 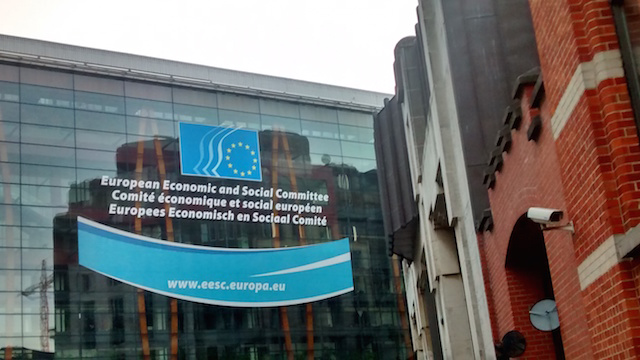 2. Initial Impressions
The first day began with a meeting in the Jacques Delors building, a huge structure with glass walls that is home to the EESC and its sister institution, the Committee of the Regions.

I found out that I’m one of 25 trainees, and the only native Anglophone – my peers come from all over Europe (Spain is especially well represented) and beyond. The youngest is 21, and I haven’t yet identified who is the oldest but it isn’t me! Some of them have degrees in European Studies, while others worked in various different sectors before coming to Brussels. After a brief introduction to the EESC and a talk by representatives of the Brussels-Europe liaison bureau, set up to assist foreigners in negotiating the intricacies of Belgian bureaucracy, it was time to find our offices.

I’m working in the Unit in charge of Visits and Publications, which is part of the Department of Communications, and I have special responsibility for ‘Culture’. This means that I help organise cultural events – mainly exhibitions, but also talks, commemorations and other artistic endeavours. I share an office with two other trainees in the Department, whose roles are separate from mine, although we often work together.

My first week was especially busy as it coincided with the opening of an exhibition of photographs of Latvia, and a Latvian cultural evening (for the first half of 2015 Latvia holds the presidency of the Council of the EU, so a lot of Latvian-themed events are happening). I spent part of the evening trying to get guests to complete feedback surveys but I also managed to eat Latvian ham and cheese and try some very strange drinks.

The week was also notable because it marked one of the Committee’s plenary sessions, and we trainees were able to go along. Having the opportunity to watch the discussions, see members interact, and witness simultaneous interpreters at work in over twenty languages was fascinating in itself, but there was an additional attraction: Jean-Claude Juncker, President of the European Commission, gave a speech. I didn’t expect to encounter such a high-profile figure only three days into the traineeship! 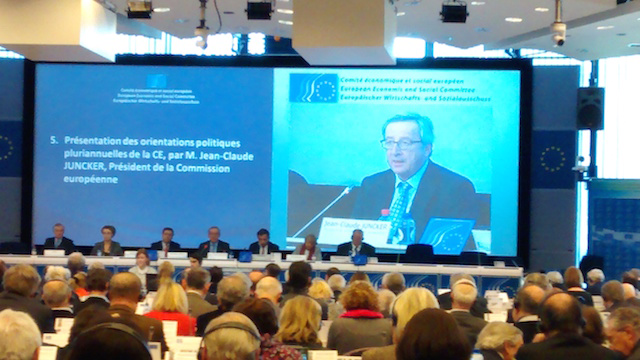 3. Settling In
My first few weeks have been a mixture of fairly routine tasks – restocking information stands, translating labels for exhibits, undergoing software training and so on – and more varied activities. I've tested out a pedometer for the staff newsletter, composed EU-themed quiz questions, written a proposal for a new exhibition scheduled at short notice, and produced speeches and briefings for senior EESC members. I have made sure to seize all opportunities and volunteer for everything! I am seriously considering applying for further jobs here in Brussels after the end of the traineeship and I hope that this attitude will stand me in good stead for that.

Given that I don't have a background in politics or European studies, one of my broader goals for these five months is to learn more about how the EU functions. I've visited contacts in other institutions and heard about their career paths, and I've also been to some of the talks and conferences regularly organised by the Commission and by think-tanks. As a group the EESC trainees were also able to attend the welcome conference for the 600 trainees at the Commission, who started two weeks after we did: amongst other topics, we heard insights into the workings of EPSO (the European Personnel Selection Office, responsible for selecting permanent staff for the EU’s institutions by highly competitive exams).

Finally, I've been making the most of life here more generally. I’ve enjoyed getting to know my fellow trainees, finding French conversation partners, and exploring other social possibilities. Brussels is a fascinating city, with quirky architecture, many appetising food outlets – I’ve started a restaurant blog – and plenty of interesting places to visit. It’s big enough to encompass districts that are very different in character, but not so big that the centre can’t be traversed on foot or via a quick tram ride. It feels like a place fill of opportunity and I’m very happy to be beginning my new career here. 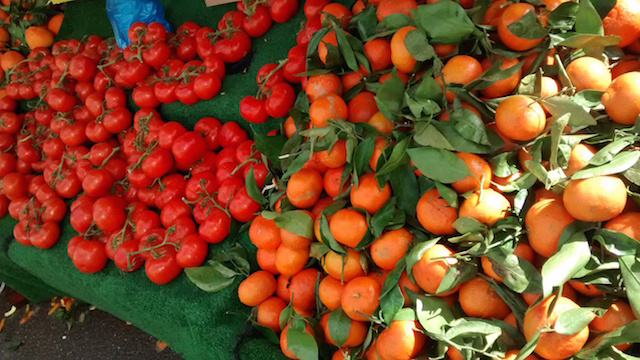 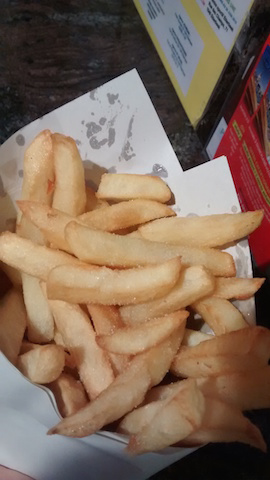