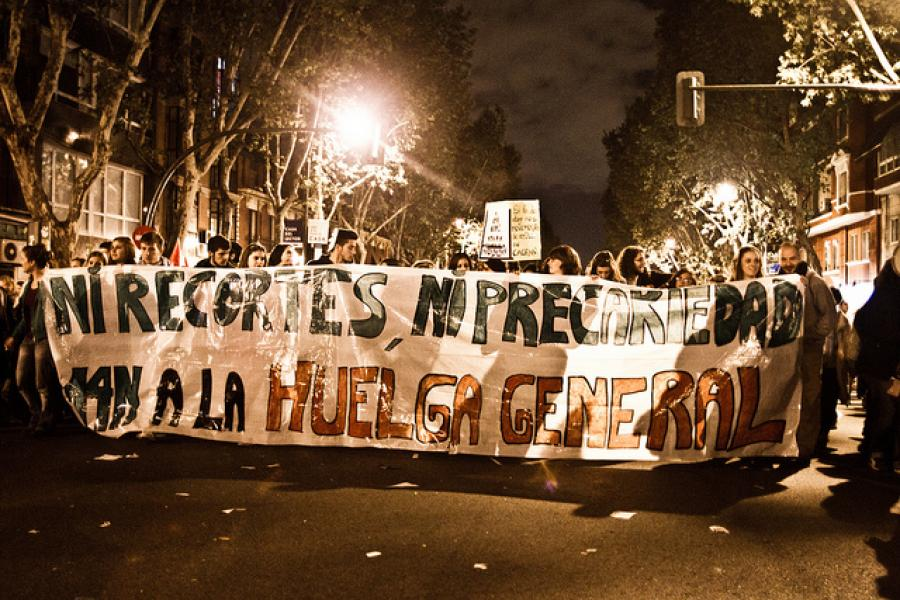 This article was written by Sophia Imeson, published on 5th January 2015 and has been read 5035 times.

Sophia is studying English Literature and Spanish at Exeter University and spent her year abroad at the Universidad de Alcalá, 35km north east of Madrid. In this article, she tells us why it's important to be clued up on the economic situation of your year abroad destination - BEFORE you leave.

No, this is not a string of expletives muttered under the breath of a multilingual madman who’s just stubbed his toe. It is, in fact, French, Italian, German and Spanish for “money” – Oh, and I threw in a few coin-related slang words just for fun.

Your eyes glaze over at the list of foreign financial vocabulary. Stuffy Spanish GCSE schoolroom memories of trying to force an imperfect subjunctive in to the description of that Nutella flavoured ice cream you tried last year’s holiday ooze from little covered up cracks in your mind. Don’t panic yet. I’m not here to test you on how many Hispanic synonyms for “global warming” you can come up with in the next five minutes. I’m here to make you feel silly, or smug, depending on your answer to the next few questions:

How much do you know about the Spanish financial crisis?

Are you completely clued up about French tax cuts, or aware of Germany’s level of economic freedom?

In other words, do you know anything about the economy of the country in which you are about to spend your academic year abroad?

If you verbally vomited up a thick soup of statistics in answer to this question, whilst spurting financial jargon and an impressively accurate summary of budget deficits, unemployment and growth crisis in the Eurozone then well done, now stop bragging. If, on the other hand, you mumbled incoherent generalisations about “the recession and stuff” then you can bet your bottom dollar (pun intended) that you’ll regret not trying to learn more before flying off to your Erasmus destination.

Why? Because I went to live with five Spanish-speaking people in Madrid for a year and, dios mío, I was embarrassingly clueless about the crisis. Yes, I knew a little bit about youth unemployment and I suppose I was aware of things being below par in the banking world. Apart from that I was as ignorant of what was going on behind the doors of el Ministerio de Economía y Hacienda as I was excited about the prospect of being able to eat chorizo and patatas bravas every day (a word of warning: these are not Slimming World approved snacks).

It’s tough enough getting one’s head around the complexity of European economics, let alone trying to hold a conversation about the topic in a different tongue. The best way to improve whatever language you’re learning is to live with native speakers, but as soon as a fierce dinner table debate about Royal Family tax fraud fires up, if you haven’t already done some basic research – or at least read the news - you’ll find yourself as uncomfortable as Iñaki Urdangarin in a room full of polygraphs. Two friends of mine who recently spent their years abroad in Valencia and Barcelona agreed that it would have been helpful to know more about the Spanish economy before moving to the country. Like me, they packed their bags knowing lots about the language, the culture and the geography of Spain but little about the financial situation. Why did we not make the effort to find out more? Was it a lack of interest? Was it too difficult to understand? Was it a shrug of the shoulders and a dismissive justification of the fact that we study a humanities degree – not economics, and therefore what’s the point?

Perhaps it was a pinch of all three things stirred up with a good, sloppy serving of laziness. You may not be a banker, an economics professor or a Wolfgang Schäuble*, but it wouldn’t hurt to do a little bit of reading before you hop on that direct flight to Paris so that, after the liquid confidence of a second glass of Bordeaux, you’re able to share your views – albeit incorrect and in broken French – on Francois Hollande’s struggle to reduce unemployment.

The solution cannot necessarily be found in a big, shiny copy of Economics for Dummies that will only end up as a sofa-supper tray in front of the television. There really isn’t any need to splash out on an annual subscription to The Economist (although I hear they offer a student rate). Do a bit of Googling, buy a copy or two of the Financial Times and, when you’re ready, you can start dipping in to some foreign language newspapers, depending on which country you’re travelling to. After a few months of this kind of research, you will be so mentally prepared for financial themed chats with housemates, work colleagues or classmates, that all sorts of economical jargon will be popping out of every orifice left right and centre. Well, maybe not, but you get the gist.

The advantages of all this? An impressive knowledge of vocabulary in the language you’re learning and studying, an ability to become more involved in advanced discussions and debates with those around you, a chance to talk about important aspects of the country you’ve been living in during your end of year abroad oral exam (if your university assesses you in this way) and the satisfaction of knowing that, unlike me on my year abroad, you have taken an interest in much more than just the nearest chorizo store.

by Together Travel
Advice