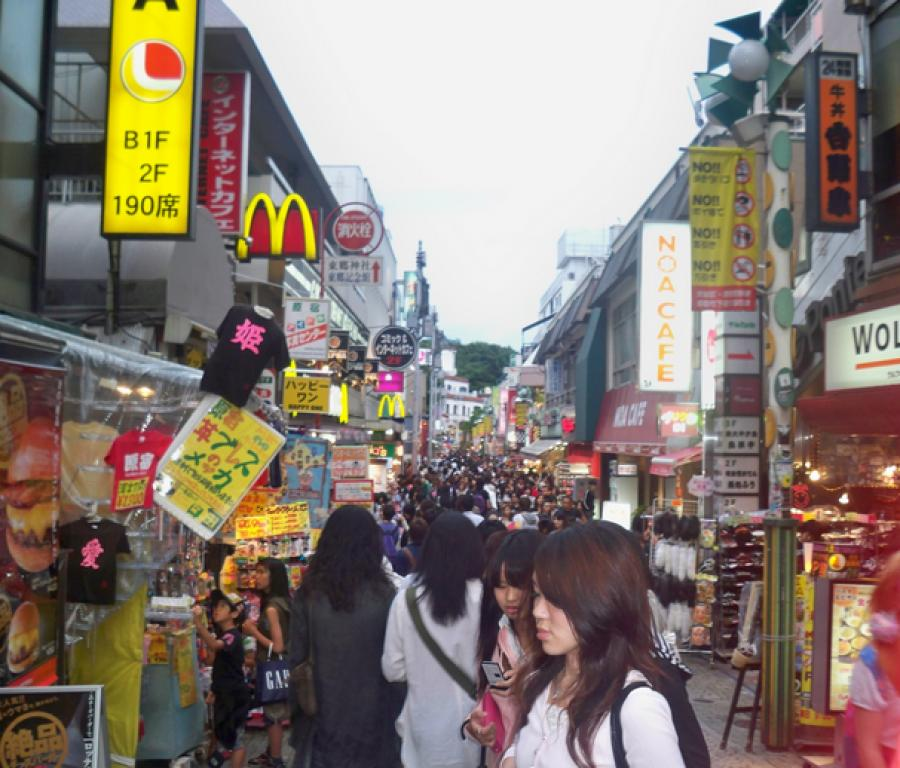 The crowds in Akihabara, Japan. by Victoria Leigh

This article was written by Victoria Leigh, published on 5th July 2013 and has been read 4428 times.

China Japan Europe Hong Kong Thailand
Considering a year abroad, but not sure whether you will be better suited to Europe or East Asia? Here are some important factors to consider before filling out your year abroad destination forms!

Asian food is some of the most famous and tastiest in the world. Sushi, Pad Thai, Korean kimchi, Kung Pao chicken…you will be stuffing your face in no time! The cuisine in Asia has a long and varied history, with lots of influences brought over from all over, such as the strong Buddhist connection to food that can be found in Thailand. Lots of rice - I have come across 'rice-burgers' in Singapore!

Non-Asian food is easy to come by in the big cities as well, ranging from Spanish to Peruvian, Italian to Russian, it can all be found if you know where to look. Authenticity is debatable, but it can be a little taste of home or just something more exotic if that's what you're hankering after.

Which leads nicely on to…

Sure, most places will provide you with cutlery should you ask for it, but who wants to ask for those when you could just put in a couple of minutes' practice a day and impress everybody with your dexterity with chopsticks? There is a saying that the more intelligent you are, the better your mastery of chopsticks, so start learning.

Korea, China, Hong Kong, Japan, Thailand…residency requires chopstick use at least once while you are there, or you are not having a truly East Asian experience.

Unless you are lucky enough to already be of Asian descent and can blend in with the crowds, chances are if you're black, brown, white or of mixed heritage, you are going to endure a lot of 'discreet' - or so the locals think - staring, particularly on the streets of China and Japan.

It is not something to take personally. Nor is it racial discrimination. However, it is just that in such a culturally homogenous continent, people who appear anything other than 'yellow' (as the Chinese refer to it) are just seen as 'different' and 'a foreign', but in a positive way. Remember, China only opened up to trade with the wider world twenty or so years ago.

Behold, cries of 'you're such a pretty foreigner!' and revel in your new-found celebrity status.

East Asia is a place of extremes in population. It is where over a billion people live, and this can be felt most obviously at rush hour on public transport. Sharpen those elbows and get used to being pushed, shoved and walked into, even when you are walking along a virtually empty pavement.

In Europe, people respect others' personal space, but these boundaries do not exist so much in East Asia. Again, it is nothing to take personally, it is the nature of the extremes in weather ingrained into the people that make East Asian citizens so bull-headed in getting to where they need to go. It just so happens that there are a billion people doing the same thing at the same time, and temporary claustrophobia arising from the sheer amount of individuals seemingly everywhere at all times is commonplace and natural. Even when it is not rush hour, it can feel like rush hour.

Take deep breaths, exhale slowly and remember why you are there: to live and experience Asia.

5. The pace of life is relentless

Remember how in Catholic Europe, shops are shut on Sundays? Not in East Asia, where you can wander around shopping until the small hours in some establishments such as Hong Kong.

As mentioned in the last point, it can feel like life is constantly hectic and on the go. Perhaps you could make use of this time for extra sightseeing, or for sampling more of the delicious food on offer at one of the many night-markets scattered throughout the countries in this region. Singapore even has a night safari!

The air in Europe, even in areas in the major cities such as London and Madrid, can be in some areas so fresh and green in comparison that you catch yourself thinking you are in the countryside, miles away from madding crowds.

In Asia, however: beware, sensitive asthma and allergy sufferers. With Singapore and China experiencing some of the worst pollution on record recently, you may want to bring extra medical supplies and pay extra attention to your respiratory health, because pollution in Asia, due to the massive amount of cars driven and the sudden industrialised upheaval of the continent in order to compete with the West, has resulted in some terrible environmental conditions.

This should not put you off going, you will be fine so long as you don't stand next to a car exhaust all day every day. But you will feel a difference in the air in Asia compared to Europe, so be careful.

It is not all negative in East Asia. With the exception of the major cities in Japan, where it can cost upwards of £7 for cheese (cheese!), and South Korea, life in East Asia can cost considerably less than in Europe.

A cross-country train in mainland China can cost as little as £15, whilst in Thailand a huge bowl of local speciality noodles can be less than £1. Full tummy AND bank balance, it's a win-win situation! Internet can be as little as £20 for a whole semester, and university canteens can sell nutritious food for as little as 40p a dish.

Furthermore, water is either really cheap (12p a bottle) in China, or even free from the water machines commonplace in student halls, so no excuse to not keep hydrated in Asia's extreme-fluctuating climate. Still, keep an eye on your budget, you don't want to be spending your hard-saved cash all at once!