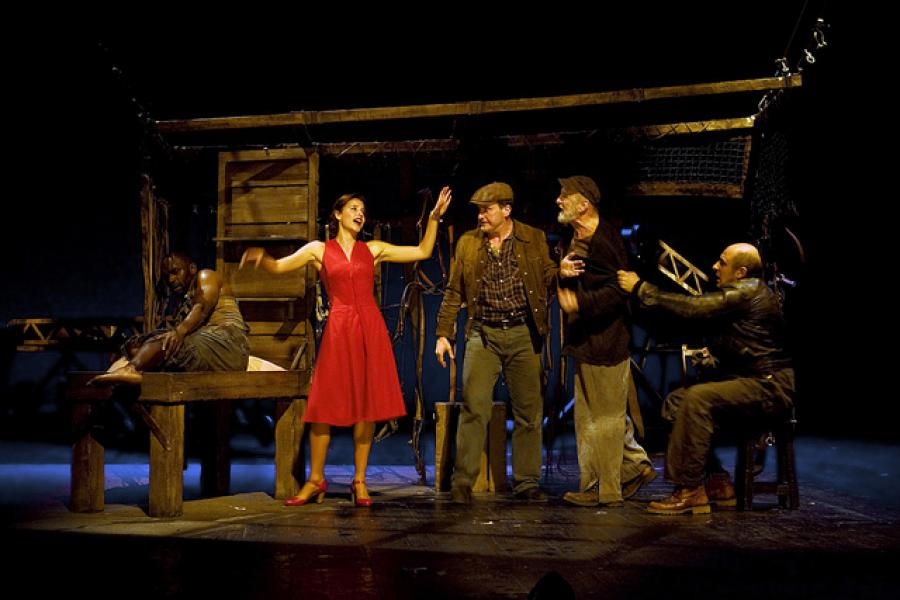 This article was written by Global Graduates, published on 15th July 2013 and has been read 2753 times.

Spain Spanish
Sian Green is studying Modern Languages at Durham University, and she spent 9 months in Asturias, Spain, as a British Council language assistant. Here's her review of 'Of Mice and Men' which she saw in Spain... in Spanish.

On Friday the 15th February I finally decided to brave the daunting prospect of going to watch a play in Spanish. Back on home soil, I rarely go more than a month without some sort of theatrical venture but since moving to Spain in September I’ve been practically starved of all things theatre. This was mainly due to my absolute certainty that, were I to attempt to watch a play in Spanish, I’d be lucky to understand the title. But one day, browsing the website of the local theatre (Los Jovellanos, Gijon) a name caught my eye and my heart leapt. John Steinbeck. Last year I decided to read ‘Of Mice and Men’ as part of an attempt to begin working through the hefty list of books in my ‘really should read’ column. Sadly, I sometimes have magpie-like tendencies when it comes to literature so, one day, when I was about two thirds of the way through, a slightly shinier book cover caught my eye and that was the end of that. And now, in Spain, I was being provided with the opportunity to kill two birds with one stone – to make amends for my literary capriciousness and to bite the theatre-in-Spain bullet. I couldn’t refuse.

Leaving the theatre after the show I was somewhat unable to form a coherent opinion on the production itself as my mind was consumed by one thought: I understood nearly ALL OF IT! As a Modern Languages student, this really shouldn’t have been cause for much more than a pat on the back. But this particular Modern Languages student (to whom the concept of ‘fluency’ seems as mythical as a leprechaun riding a unicorn) could’ve cracked open a bottle of bubbly and thrown a little fiesta in celebration. But gradually, as my excitement died down, I was able to reflect upon what I’d just seen. And it made for some pretty enjoyable reflection...

Thanks to GCSE English Literature, I doubt that there are many people reading this who are unfamiliar with the story but for the unacquainted amongst you here is a very brief summary (no spoilers, I promise); the tale follows two ranch workers at the time of the Great Depression in America. They travel together, look after each other and encourage each other towards a common dream of someday owning their very own plot of land. The story’s beauty and tragedy (a bucket load of tragedy...but, as I said, no spoilers...) is found in the nature of their relationship as one of the men, Lennie, is mentally disabled and the other, George, takes on the role of his guardian, through thick and thin. It’s a story about human nature, friendship and hardship and was partway inspired by wonderful Robert Burns poem ‘To A Mouse’.

The production I saw, originally staged in Madrid and met with critical acclaim, was a treat from start to finish. Fernando Cayo and Roberto Alamo were both outstanding in the roles of George and Lennie. Cayo, as George, managed to sustain the necessary pace to offset the slow and lumbering figure of Alamo as the mentally disabled Lennie without ever seeming to rush. They complimented each other perfectly and it was clear that, vocally, physically and emotionally, the two actors had taken great care to master not just their respective roles but the duo as one entity too.

The show ran for 120 minutes without an interval, which I think some people found quite intense given the affecting nature of the story. Then again it didn’t warrant an interval, which, I think, would have interrupted the flow. And flow it did. Every scene change was slick, quick and dramatic, with the entire cast (10 in total) running on stage in character and rearranging the set with shouts and cries, as if carrying out labour on the ranch. I love it when set changes are integrated into the action of a show so I was sold from the off. The set was simple, and rightly so given the complexity of the action – all that was really required of it was to support the action practically and effectively. What at first was a mound of grass upon which we found Lennie and George lying as the curtain rose, was hauled up by pullies and ropes to seamlessly transform into the wall of the ranch building. Two hinged flats were lowered from this same wall and, voila, two beds were created. Magic.

Cayo and Alamo undoubtedly carried the production but they were supported by a very strong cast. Irene Escolar, playing the wife of the ranch-owner’s son and the only female in the cast, was totally captivating. My one criticism would be that she spoke at the speed of turbo-charged light. But what I didn’t understand of her words was more than made up for by her body language. Our first glimpse of her came as she floated onto the stage in ballet shoes and a figure hugging dress leaving Lennie, George and the male population of the audience jaws agape. Another remarkable performance was that of Eduardo Velasco, who played the brawny ranch hand Curly and who used his Spanish machismo to fantastic effect, practically oozing testosterone every time he entered the stage, such was his presence and strength of character.

I laughed, I gasped, I sighed and at the heartbreaking climax of the play I most certainly cried. Every emotional note was pitch perfect and the universal themes were deftly brought to the fore so that a story heavily anchored in 1930s America was made relevant and relatable. The language barrier was no match for this absolute top-notch production and I’m so bloody glad I went.