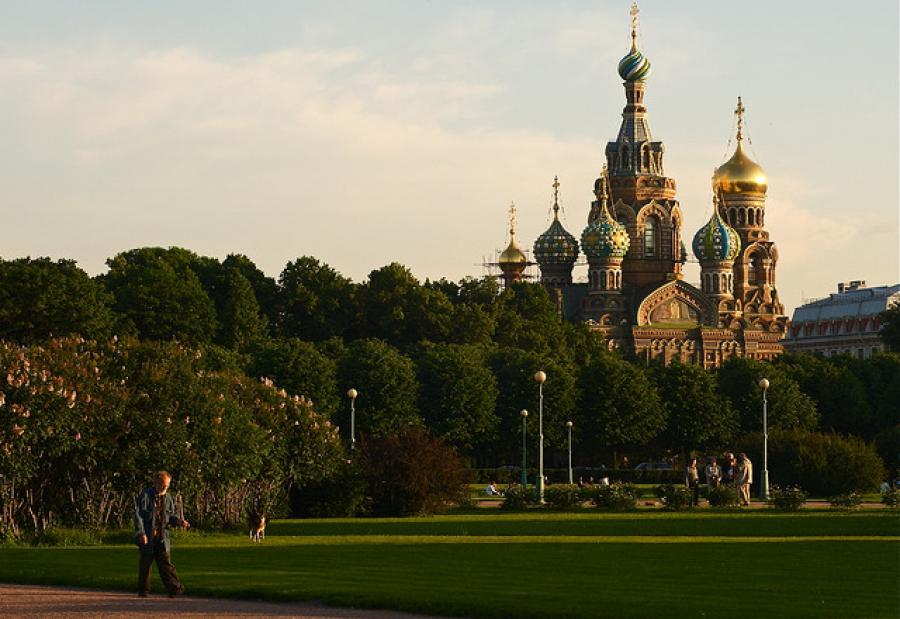 This article was written by Elen Roberts, published on 22nd September 2014 and has been read 24568 times.

Russia St. Petersburg Moscow Culture Shock Ukraine
Elen Roberts has spent the past two years working in Germany, where she started taking Russian lessons in her spare time. In summer 2013, she did an intensive Russian course at Kiev’s Nova Mova International Language School and this summer she visited Moscow and St Petersburg.

As the ongoing conflict between Russia and Ukraine shows, there are some deep cultural and political differences between the two countries, especially in their attitude towards the West. I am definitely not suggesting that they form one monolithic entity. Nevertheless, given their shared history, the long legacy of the Soviet Union and the fact that Kiev remains primarily a Russian-speaking city, I experienced similar cultural ‘shocks’ in all three cities I visited.

Throughout much of the Slavic world everyone has three names: forename, patronymic (based on the father’s first name) and surname. What surprised me was that in Russia people’s forenames do not vary much – there are maybe 20 stock names for each gender. I lost count of how many Alexanders, Dmitrys and Anastasias I was introduced to.

What is even more confusing is that among friends I never actually used full forenames, as everyone has a ‘diminutive’ or nickname. This also goes for foreigners. In Russia I was affectionately called Lyena and in Ukraine, Lyenochka. My travel buddy George became Gosha or Zhora.

Admittedly I was woefully unprepared for this. In Kiev it was 30°C for the entire month I was there, which apparently is quite ‘cool’, as the temperature in summer can regularly reach a scorching 40°C. When we went to Moscow, it was incredibly hot and humid, whereas there was a torrential downpour and bitter winds throughout our three days in St Petersburg. As you’d expect, winters are long and unforgiving in this part of the world. I was told by friends in Kiev that some winters, there is so much ice and snowfall that they struggle to open their front doors!

Sushi – so much sushi

The Ukrainians and Russians are the biggest sushi enthusiasts I have ever come across. In Kiev and Moscow you can find sushi bars on nearly every street. What I found a bit bizarre was that even in Italian and Mexican restaurants, for example, the menus will inevitably have an extensive sushi option. I once ordered a caprese salad and California rolls – washed down with a mojito served in a gigantic glass jar. In Russia Gosha and I very much rated the ‘dve palochki’ (two chopsticks) chain of restaurants but they are all pretty good.

Having grown up in a Protestant country, I am used to seeing churches that are austere and minimalist. The Orthodox churches in Russia and Ukraine, however, take ‘bling’ to a whole new level. Many have huge golden domes, ostentatious decoration, intricate paintings, incense and very colourful costumes for the priests. In Moscow, some of the smaller churches were even emblazoned with the words “Christ – resurrect” in flashing neon lights!

Warning for girls: If you want to go inside an Orthodox church, you have to cover your shoulders, legs and preferably, your hair. You can usually borrow a headscarf from the reception though.

For me, this aspect of Russia and Ukraine is what made life there so palpably different from that in Western Europe. In a nutshell, the concept of chivalry lives on and men are expected to take care of women.

In Kiev I remember being completely stunned when men of all ages would regularly open doors for me, offer me their seats in the metro and wordlessly help me with my heavy bags. I was perplexed and somewhat suspicious when random men on the streets would tell me (or rather, yell in front of everyone) that I was pretty or when male friends would buy me flowers or chocolate for no reason at all. In the West this sort of behaviour would make me think they were after something but I soon came to realize that in Russia and Ukraine, this is all part of normal daily interaction between the sexes.

Oh and ladies, in these countries, men automatically pay for everything – drinks, meals, club entry tickets, taxis – the whole lot. Having always paid my way (even on first dates – much to the horror of my Slavic girlfriends), I was really taken aback. To avoid another Cold War, however, I gradually realised that I had to just temporarily let go of my feminist principles and accept this cultural norm! It is considered highly emasculating for a Slavic man when a woman insists on paying.

I would say that Russia and Ukraine are culturally quite challenging for British travellers, especially if you don’t speak Russian or at least read Cyrillic. You are somewhat removed from the predictable order of life in Western Europe and there are many things that may throw you at first. Nonetheless in terms of their history, architecture, sights, extremely interesting people and of course, sheer abundance of sushi – you definitely won’t regret going!

10 things I wish I'd known before leaving for Russia