Home Articles Interview: how travelling to China inspired a course in Beijing
Share
Tweet
Write for us 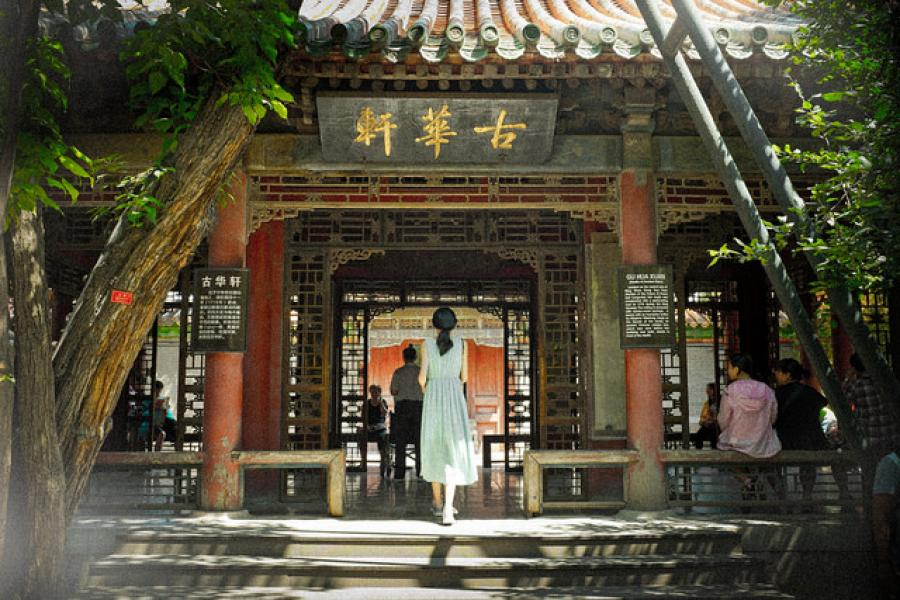 This article was written by Lexie Hall, published on 18th August 2016 and has been read 3142 times.

Lexie Hall, a third year Geography student at Newcastle University spoke to Amy Catling, a University of Sheffield Linguistics graduate, about her experiences in Beijing, which she first visited in 2014, before getting the opportunity to return to study at Beijing Language and Cultural University for a month in 2015.

1. You first travelled to Beijing in 2014. What made you decide to travel to China over any other destination?
I went for a few days after I handed in my dissertation, before graduating and starting to look for a job. When I’d been working the summer before, I got a random email about taking a Chinese course for 5 days, which I decided to do! I really enjoyed it so was added to a mailing list, which told me about loads of Chinese activities happening at university which I didn’t even know had existed previously. So I started looking into travelling to China; I also really wanted to see a panda in real life!

2. Did you travel with anyone else or alone?
I went on my own, which I wanted to do, as I’d never done anything on my own before and wanted a bit of a challenge. I travelled for a month in total, travelling around various parts of China including Shanghai, Hong Kong and Macau, as well as Beijing.

3. What sort of research had you done before heading to China? Was your trip planned out or more spontaneous?
I think you have to plan a little bit with China, especially as when applying for a visa you have to state exactly where you’re going to be. I didn’t know anyone else who’d been, so the first time I went I really didn’t know what to expect. But the second time I went, especially as I’d taken language lessons, I was more comfortable, so it was possible to be more spontaneous.

4. Did you experience many language or cultural barriers? How did you overcome these?
A little bit sometimes, yeah. For example, once I had a really bad headache and I found a pharmacy, but the experience was a lot more difficult than I expected, what with everything being in Chinese! I walked out without getting anything – it’s just one of those little things that’s bound to happen, though! But people do expect that you won’t know Chinese. Often if they can see that you don’t know, they’ll bring someone who speaks English over to make things easier for you. They also often have calculators that they use when bartering, that actually say the number out loud in English! You can also count on your fingers, except numbers 6-10 are actually different to what they are in the UK – I thought they’d be international! It was definitely a lot easier the second time, having that little bit of knowledge. People really do appreciate you knowing even just a little bit of Chinese, as they expect you not to; they’re really receptive to it.

5. How did you end up returning to Beijing in 2015?
I did Linguistics at university so had always experimented with languages anyway, then I took casual Chinese classes once a week when I got a job. I had my first exam in March and somehow got 98%! So I was encouraged by Sheffield to apply for a scholarship to study in Beijing for a month – and I got it!

6. Where did you stay while studying? What was your accommodation like?
I studied at Beijing Language and Cultural University who gave me on-campus accommodation. I definitely had to get used to the shared bathrooms and stuff like that; it wasn’t ideal, but you just get used to it. I was actually supposed to share a room but I didn’t see the Russian girl I was meant to share with for two weeks, before coming in late one night and finding her asleep, before she left again the next day! So I effectively had a double room to myself. There was a really good atmosphere in the accommodation, though, with lots of people on my floor – including one girl from Sheffield funnily enough!

7. What sort of opportunities and activities did you get involved in when you weren’t studying?
Well I had to get up at 6am to go to class every day! But that meant we finished at about 12pm, so we got encouraged to go out and use as much of the day as we could. We’d go for lunch and then have the rest of the day to do what we wanted. In 2014 I only spent 4 or 5 days in Beijing which I felt was enough at the time, but living there for a month was so different. I got to hear about things you wouldn’t as a tourist, and there was just so much time to explore. I even went to Mongolia one weekend! You definitely have more of an immersive experience when you stay somewhere for so long. Coming back from Mongolia felt like I was coming back home from a holiday!

8. Have you had any negative experiences or difficulties while in Beijing or anywhere else in China?
Not particularly. But you do stand out so much that you do get stared at a lot. We would go out and almost every day get asked for photos. But you do get used to it, and as long as someone asked nicely I just did it, as no one means any harm.

9. What would your advice be to anyone considering travelling to or studying in this part of the world?
I’d really just say to make the most of it, and leave a few days to just kind of explore, and go somewhere randomly, because it is very different! I sometimes really miss the street culture. I spent a day on my own and just looked at a map and thought, “what do I want to do?” I’d heard about the art district so just went. You’ve just got to be open to it and say yes to things! You realise it’s quite cheap once you’re there for a while. There was one day I got asked if I wanted a tuk tuk ride, which I thought was a bit cheesy, but I thought I should just do it! I questioned afterwards why I’d given my number to an old woman in China (she asked me for it!), but things just happen!

10. In retrospect, what do you wish you’d known before travelling to Beijing?
In terms of Beijing, you don’t realise how easy it is before you go to get around, as long as you’re savvy with a map. The metro’s really easy to use and there are cheap buses. Also, definitely spend your time taking out a decent travel insurance policy, as you never know what could happen. I’d also say you don’t realise how easy it is to travel on your own until you’ve been!

Find out everything you need to know before travelling to China and follow @FCOtravel on Twitter for the latest updates.