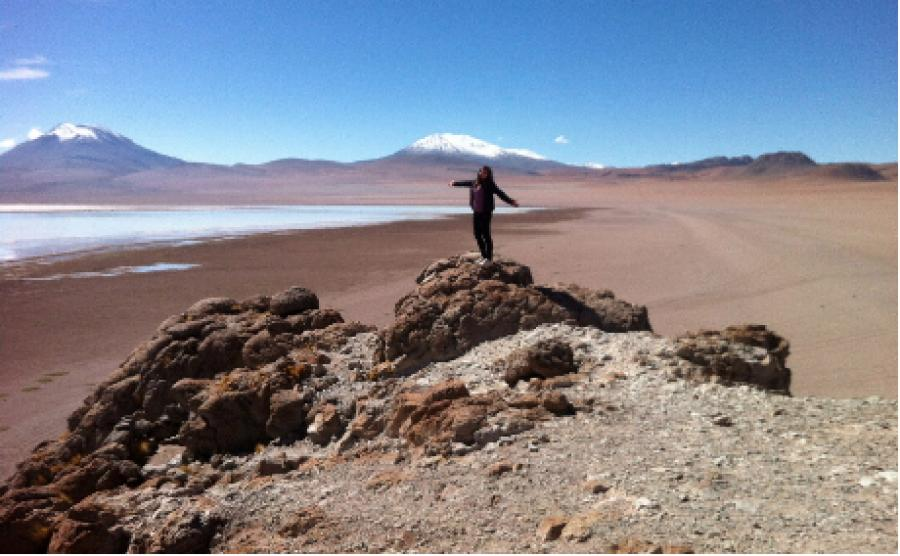 This article was written by Hannah Qurashi, published on 26th May 2015 and has been read 3473 times.

Hannah Qurashi studies Spanish and Linguistics at the University of York, and is currently on a year abroad teaching English in Santiago, Chile. While there, she spent two months backpacking round South America and is now going to tell us a bit about her experience. To find out more about Hannah's adventures, you can read her blog here.

As we already know, spending time abroad is a fantastic opportunity that allows you to live in a foreign country and learn another language. It also gives you the perfect excuse to go travelling and explore more of the beautiful world we live in.

During my year abroad in Chile, I decided to take two months off work in January and February to go backpacking around South America. It turned out to be one of the best decisions I've ever made. In those two short months, I visited 5 countries, 2 world wonders, 3 glaciers, 1 gigantic waterfall, 1 desert and too many beaches to count!

For different parts of the journey, I travelled with friends, alone, and with my family who came out to Brasil meet me after Christmas. For money, I used the wages I'd saved from teaching, as well as my birthday and Christmas money from home. So when the end of December finally came around, I set off with my huge backpack on a two month South American adventure.

Here’s a bit about my experience on the journey: the highlights, the low points, the challenges and the surprises.

1. The Spectacular sights
Obviously, the main reason to travel is to see the world's attractions. Some of the best experiences I was lucky enough to have included stargazing in the San Pedro de Atacama desert, standing in the middle of Iguaçu falls (a waterfall that stands on the border between Argentina, Brazil and Paraguay), watching the clouds reflections on the sparkling salt flats in Uyuni, and many, many more. The spectacular views and memories of the things I did whilst travelling will always be my best souvenirs.

2. Travelling alone
Travelling alone can be a scary but exhilarating experience. Mostly because you are completely in control of what you do and where you go. Sometimes, I hated it. Other times, there was no better feeling in the world. My first experience travelling alone was to Patagonia and I was really nervous to go by myself. However, all of my anxiety disappeared when I was sat alone by the lake, watching ice from the Perito Moreno glacier break off and crash into the water. It was one the best moments of my whole trip. So by taking the plunge to go alone, you can really make the most of your time abroad.

3. That sense of achievement
When travelling, the desire to see and do more means that you are able to achieve things you never thought you were capable of. I'm not really an athletic person so I was pretty proud that I managed to survive getting up at 4am to vertically climb 12km up to and back down from Machu Picchu. By the end of the day I felt invincible, like there was no mountain I couldn’t climb. This priceless feeling, coupled with the sight of this mysterious Inca city against a backdrop of the rising sun was 100% worth every painful step.

1. Waiting for transport
As you're constantly moving from place to place, you will use public transport: buses, planes and trains a lot. This inevitably involves waiting around for hours at bus stations and airports. To put this into context, the longest time I’ve spent waiting for a delayed flight was 8 hours at an airport in the North of Chile (our plane was broken and another had to be sent from Santiago). Now, I can safely say that the public transport in South America has improved my patience.

2. Plans going wrong
Sometimes it is hard to stick to a plan whilst you’re travelling. In a split second you can find yourself in an unexpected situation that is out of your control.

Here is one example. I was on my way from Uyuni to La Paz in Bolivia. As the journey is 10 hours, I decided to take a night bus which I thought would be fine. Everything was going well until the bus stopped all of a sudden in the middle of nowhere. I stared out of the window to see what was happening but it was pitch black and raining so hard that I couldn’t see a thing. Everyone in the bus started to get out of their seats and bang on the windows- we were locked in and the driver was nowhere to be seen. We waited 3 hours on the pitch black bus with no explanation as to why we were stopped. It turned out that the road was flooded by the rain and the driver was outside helping to clear away the water away from the path! South America is generally not dangerous, but you have to be careful in some places.

3. Exhaustion
Whilst travelling is a completely worthwhile experience, it's also physically and mentally demanding. You have no choice but to spend every day on your feet, working out how to get from A to B. Also, you have to live out of a huge backpack which you carry around everywhere, constantly packing and unpacking all of your stuff. There were many days that left me feeling nearly broken.

Getting off night buses and searching for a hostel when you don't know the place all at 6am in the morning, is a good example of those days. Exhausting situations are unavoidable when you’re a backpacker!

3. Something that was a challenge

Budgeting
When you don't know the currency or the culture, budgeting for each country you're going to visit can be really difficult. I overestimated the amount I needed in Bolivia, as everything turned out to be much cheaper than I expected. This was a nice surprise to me which meant that I blindly spent all the money I budgeted for Bolivia without a second thought. However, this turned out to be a terrible idea. When I got to Peru, Cusco was much more expensive than I had budgeted for. This left me short, which was a shame because I had to cut down my spending on Peruvian food (which is arguably the best cuisine in South America).

4. Something that Surprised me

My Confidence
Travelling (especially alone) really shows you what you're made of. It can teach you so much about yourself, and encourage you to regularly step out of your comfort zone. I found that my self confidence improved a lot when I was traveling alone, as I only had myself and the decisions I made to rely on. Travelling also really helped to combat my shyness, as I was constantly meeting loads of new people in hostels, on buses, on tours. After just a few days, I felt confident enough to start conversations with complete strangers, which was great because other travellers always have the most interesting stories to tell.

So I hope I’ve shown that travelling can be a really valuable and enriching life experience (even during the rough times). Not only can you get to know a different country and its culture, but you also learn how to look after yourself. Whether it’s six months backpacking or just a weekend away with friends, make the most of your opportunities to travel, and be that person who takes their chance at true freedom!