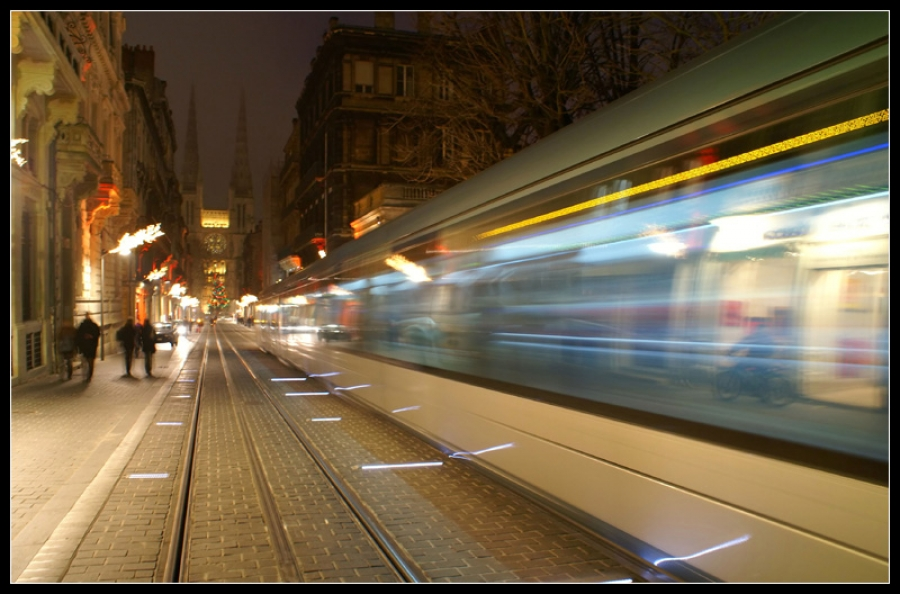 Tram leading to the Cathedral St André by Vincent Roussiere

This article was written by Ines Sordo, published on 15th March 2011 and has been read 2502 times.

Bordeaux
The fantastic one-woman bdx tourism ad, rolling rolling THUMP and bonjour gorgeous, can I buy you a boisson?It is now March, and just as surely as all the British tourists have started wearing sandals at the slightest hint of sun, so does this blog once again rear its, one hopes improving, head to deliver a status report on my life and Bdx. And, in a rare moment of brevity I shall give you a quick conclusion for this month: Come to Bdx.

For the past week or so it has been so delightfully warm that resisting the temptation not to doze off at work when the sun hits me in the afternoons has been dangerously impossible (this does of course mean that stagiaire of the month Sordo has indeed dozed off at work, oops). However this also means that my in-line skating sessions on the quais have become incredibly delightful (who knew moving was easier when not wearing three thick jumpers??) and it makes trips to the lovely ice-cream shops in the quartier st Pierre, which I should point out are dangerously addictive, MUCH more normal looking! But I know what you all actually want to hear about… my museum quest! This month: the national customs museum! For what would seem to be a rather dull subject the museum manages to pack into its small surface area a rather hefty punch of rather interesting information. The best bit though is of course the stuffed lion at the end, in the “contraband goods” section, something I’m pretty sure no-one sees coming and is annoyingly JUST out of reach (of course I tried). Personally, I think surprise feline is always a valid stand-alone reason to go anywhere so I urge you to take a gander inside one of the best buildings in bdx on the place de la bourse.

You know what seems like a great idea? Having “bike parkings” stationed around the city with bikes that you can rent for a small fee an hour and run around the city with. You know what isn’t a good idea?? Having bike parkings that are either always full, forcing you to park ridic far away or have free stations that are actually broken (the bastards) or having bikes with seats that aren’t properly fixed and swivel round thus causing you to, at some point, swivel in the opposite direction to the bike and teach you in a harsh manner that human flight is in fact impossible. But of all these veridical stories (ALL of which have happened to myself) the best has got to be the bike with the seat that didn’t swivel but instead chose to slowly sink as you cycled, leading to one having a, literal and figurative, sinking feeling. I do of course exaggerate a touch, I have had plenty of bike rides with no eventualities whatsoever (well, none caused by outside factors) but I would suggest checking the bikes you take for any possible evil before you press the “release” button. Especially if one is out delivering stuff for work and keeps consistently coming back with new scratches and scrapes.

If anyone has kept up with the blog (please, allow me to dream) you might remember that back in December I wrote about the French male race and half-promised to give the boys a couple tips in the next chapter. Having failed rather impressively at such a simple task I can finally, just 3 months later, give you the low down. I went out with my pen and paper and did me some good old research just for you, boys… ok, so I stayed in and asked people on Facebook chat but that’s not the point (side question: do I owe Zuckerberg any money for saying the F word? Should I prepare for a lawsuit?). General consensus seems to be that they are not easy conquests, more the demanding type that wont let you get away with anything if it isn’t to her pleasing. And they won’t shy away from looking for the person that will displease them the least. When it comes to flirting the French are slightly predictably rather the coy little flower but quickly bring out the, shall we say feline, they have hiding behind it. They know their mind and aren’t afraid to use it, which combined with the fact that an annoyingly high number of them are tall, skinny and have perfect skin can get slightly annoying for those of us from the shorter child-bearing range of the physical spectrum. But enough about me, you go get ‘em boys, and if anyone wishes to send any anecdotes in for our amusement please please do so.

Basically I don’t know why you’re still reading this and not on another browser window booking your tickets to come over here. But since you are, thanks mum. With this I leave you for another menstrual cycle (what? It’s a monthly blog, we’ve hit chapter 7, it’s hard to come up with good euphemisms the entire time ok?) But will be back with stories of coping with year abroad projects and making the most of your French learning times in France I’m sure! Give yourselves a cuddle and tell yourselves it’s from me.