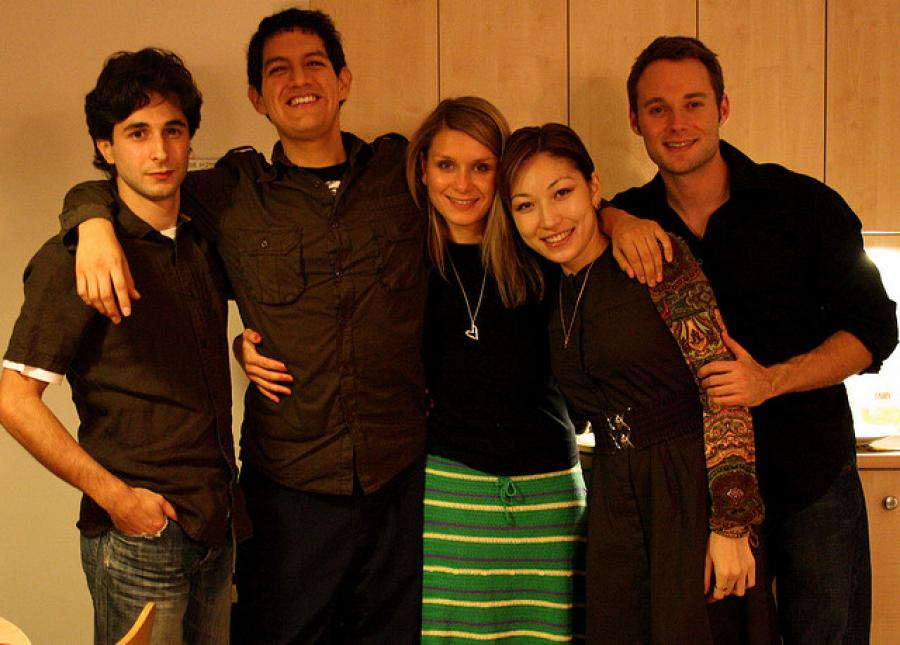 This article was written by Sophie Lerway, published on 19th March 2014 and has been read 50625 times.

France Living and working in France Advice Relationships Accommodation Pau
Sophie is a Durham university student on her third year abroad working in Pau, South West France, for 10 months. She is living with locals, and loving it! Here's why...

Sitting in a lecture theatre pre-year abroad we were told that the best way to improve your language is to live with native speakers of the target language; immersing yourself in idioms and becoming adept at insults and swear words are particular skills that can only be acquired by making good friends with locals.

So I decided that I would definitely move into a ‘colocation’ on my Year Abroad in Pau, France (I hadn’t heard of it either) and after 4 months of living in less than desirable university halls I managed to find a flat in the centre of town with 2 French flatmates, a boy and a girl. After initial concerns that they were in fact a couple and I would find myself eating lonely cordon bleus for one next to their romantic candle lit meals for the next six months I am happy to say that this is not the case. I have now been in the apartment for 2 months and can safely say that my French has greatly improved. I find myself able to create the illusion of cool and casual linguistic competence by peppering my speech with the odd ‘tu vois?’, ‘tu m’etonnes’ and my personal favourite ‘nickel!’ which I hope draws attention away from my more glaring grammatical errors that I will probably never lose, sadly.

But as it turns out, my French flatmates are not only my personal tutors who demonstrate endless patience and kindness towards my botched attempts to explain that the bathroom light bulb has gone or that the front door lock has broken leaving me locked in the flat. They have also provided more, less obvious benefits that have without doubt enhanced my time in France.

1. French nicknames are more fun than English ones.

In England I am Sophie, occasionally Soph with the odd Loaf thrown in for good measure, but within a week my colocs had christened me Fifi. They toyed briefly with Soso, but I put my foot down firmly. After an uneasy start I am now quite used to being Fifi, it's catchy.

Come July I will miss the fantastic brunches that are frequently prepared for me while I lie dying of a hangover on a Sunday morning: dippy eggs with baguette soldiers, bacon, pineapple, cheese and pain au chocolat with strong black coffee may sound like an odd combination but trust me: French brunch gives its English counterpart a serious run for its money.

3. They know how stuff works.

Without the help of my flatmates I would never have been able to cope with the ridiculous demands of the CAF office. After much explaining of what I need to do I am now hopefully on my way to receiving some money, although I am not foolish enough to hold my breath. Similarly, they have advised me on how to get a doctors appointment with a doctor who won’t feel your groin (advice which I deeply regret not taking) and which hairdressers won’t take 3 inches off when you ask for a trim.

4. They can offer a cinematic education.

I have probably watched more films so far this year that the whole of 2013, and some of them have been quite good (others not so much – Jeux d’Enfants is a very disturbing film, at the end of which the couple commit suicide by letting themselves drown in liquid concrete, not laugh a minute stuff). Having French subtitles on English films is also a really good was of learning new vocab.

5. You can make good friends with minimal effort.

This one applies to any kind of housemate I suppose, you always have someone to moan to or pretend not to be eating chocolate with without having to actually go out and be sociable all the time. It's nice to meet my flatmates’ friends who are often here and for them to meet mine. Making friends with people in a different language can be tiring and difficult, so it's nice when you can do it in the comfort of your own flat with a nice cup of tea in hand. Being in the university halls was great because of the people, but it didn’t feel like a home, and living in a colocation has a much more homely feel which can be nice when you are far away from family and friends.

And of course it’s not a one-way street! I have introduced my flatmates to such delights as Yorkshire tea (with milk – and it was a success!), Creme eggs and, somewhat bizarrely, sweet potato. I also like to think I have amused them with my language errors; a particular highlight was when I said I wanted to cook them ‘un diner roti’. Their reaction told me that there had been a serious misunderstanding, and sure enough it transpired that they thought I said ‘un diner érotique’ – we got over it eventually, but I don’t think I will ever try to make them a roast dinner after that…

Living with native speakers has been the best decision of my year abroad, and although there are many other ways to improve your language skills I would recommend anyone considering it to take the plunge – if you trust your instincts, don’t panic whilst flat hunting and choose people you think you will get on with, then you will definitely reap the benefits!

How do you secure an appartment in france without a french guarantor?

You'll get around not having a French guarantor if you rent privately - your landlord might just ask for a couple of months of rent in advance. Agencies are the worst for letting you rent without a Fr...

Top survival tips for your year abroad in France