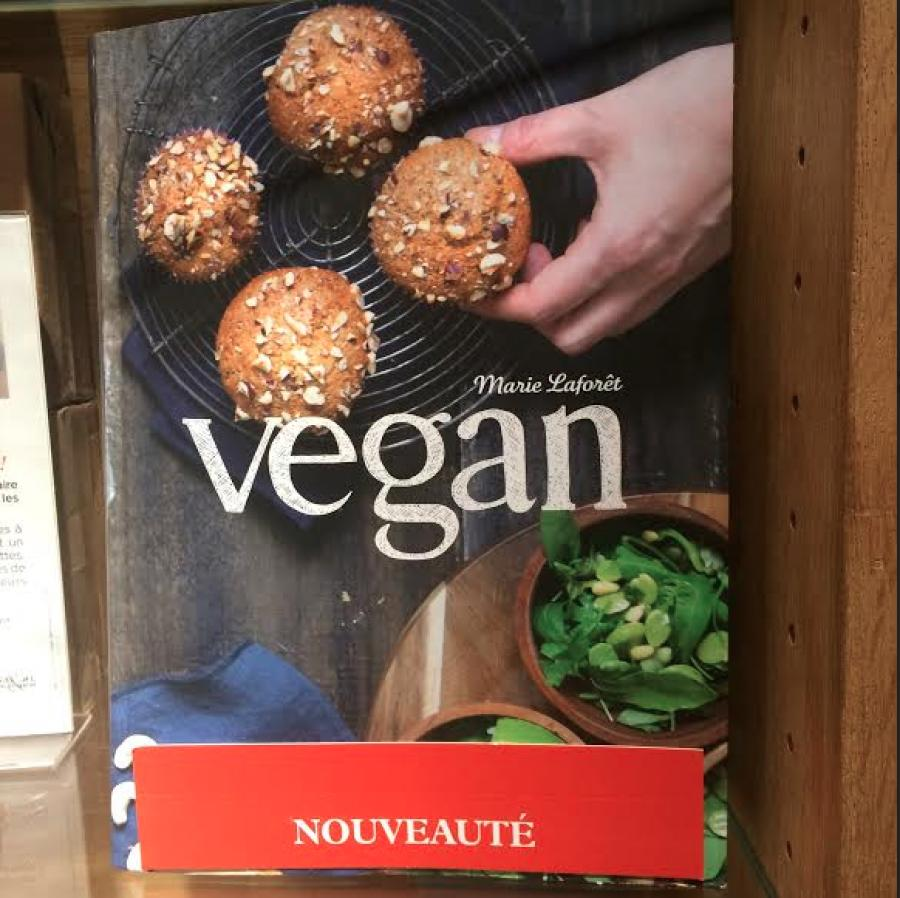 This article was written by Phillie Spottiswoode, published on 2nd June 2015 and has been read 3800 times.

Phillie Spottiswoode is a 3rd year undergraduate at the University of Sheffield studying French and Russian. She spent the first semester of her year abroad in Aix en Provence, France and is spending the current semester in St. Petersburg, Russia. Here she discusses her struggles and advice as a vegan abroad! This article originally appeared on Phillie's blog.

On the 1st January 2014 I made the only New Year’s Resolution that I have ever stuck with. I was going to become vegan, and it was going to be fabulous.

I had already been vegetarian for 1.5 years, and I’d been reading up about milk and eggs, I was watching those food documentaries on Netflix and I’d come to my own personal conclusion that since I could dramatically reduce animal products from my diet (notice I said ‘reduce’ and not ‘eradicate’ – I’ll get to that point later) and I wanted to, there was not a lot stopping me. With a brief vegetarian-throwback when in Canada (being vegetarian in Alberta was hard, let alone being vegan), my first six months of veganism went well. However, then it came to September, and I knew that I was going be living in Aix en Provence, in the land of Wine and Cheese. Should I go back to being vegetarian, like I had in Canada? Should I ditch the whole thing altogether and eat meat again? It was a tricky decision but I knew that I didn’t want to give up something that was so important to me, so I made the decision to become an open-minded vegan. For me, being vegan isn’t about completely eradicating animal products from your life, it’s about dramatically reducing them, and although being vegan in France and Russia would be difficult, it would pay off.

Luckily, my two favourite things in the whole entire world, rum and avocados, are vegan. So already we had a positive frame of mind to work with. But, the rest was a bit of a struggle, so here is my list of How To Be A Vegan On Your Year Abroad! 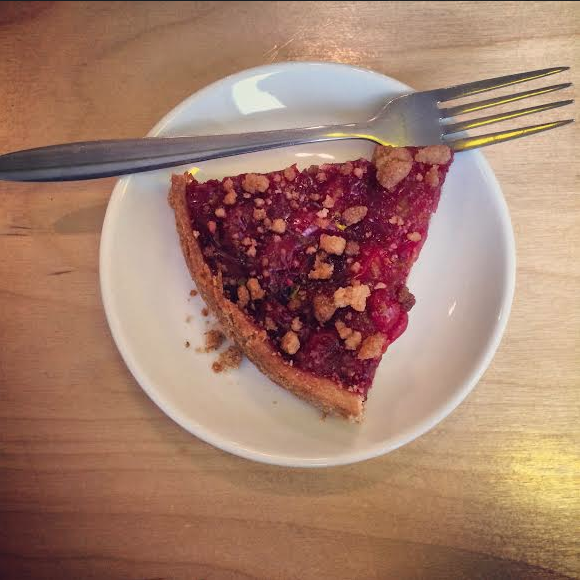 1. Keep an open mind for the first couple of days
Give yourself a few days to adjust. You are not going to know what local dishes are 100% vegan. Whenever I am somewhere new, I relax and will just go vegetarian for a couple of days. You already have enough stress to deal with, what with opening bank accounts, sorting out registration, visa documents etc. You do not need to feel guilty as well and go hungry.

2. Pocket dictionaries are a lifesaver
When making the most of the new supermarkets (and if you’re like me you do enjoy a French supermarket), there will be lots of things you do not understand. What the hell is that and what is that and is that even a food stuff? In France I had a really shitty data plan as I refused to open a bank account for 3 months, and so looking words up on bab.la wasn’t an option. Enter la dictionnaire. It had a lot of weird words in it, all of which were useful for finding out what 'yeast' and 'anchovy' was. I mean, I had a rough idea, but you don’t really want to just assume when France and Russia like to surprise you by putting animal products in things that don’t really require animal products. In Russia, I have a great data plan and so bab.la ahoy.

3. International Cuisine: Your new best friend
It will come as a surprise to no one that French and Russian cuisine is, for the most part, not veggie-friendly. Many cheeses contain rennet, wine can contain ox-blood and egg whites, and dishes that are solely vegetables are often seen as incomplete. No one can deny that French and Russian cuisine is pretty damn tasty, but not so easy if you’re vegan.

When living in Aix-en-Provence, my German friend (who is a vegetarian and also gluten-intolerant) and I made the most of Aix-en-Provence’s sushi scene (strangely buzzing), so by making your sushi vegetarian (if you avoid the maki cheese and tamago), you have made it vegan. However, just one tip: miso soup can be made with fish stock, so it’s a good idea to check this. 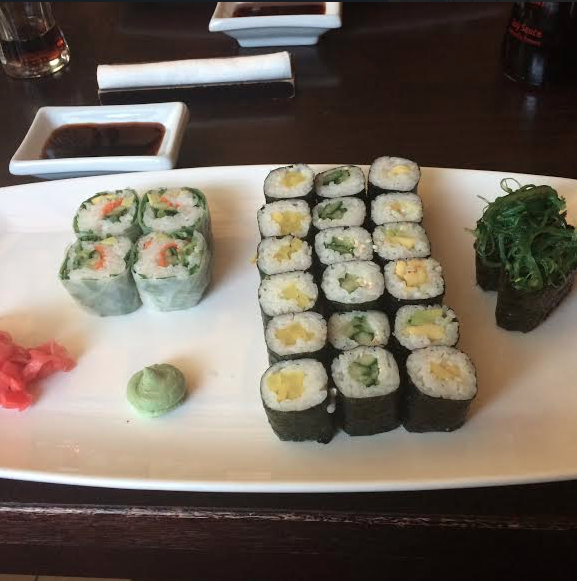 In St.-Petersburg, I followed on the sushi train, and there they are a little more interested in vegan diets. I made the most of ll Patio’s Japan-themed sister-restaurant, Planeta Sushi, as well as Tokyo City and Sushi Wok. As well as this, there is a magical restaurant called Dve Palochki, which serves themed food. You have the Japanese menu, the Pan-Asian menu, the American menu, the Italian menu and also this handy little “sandwich menu” with Tofu and Falafel wraps.

There is also the opportunity to exercise your language skills and ask for things to be made vegan – so asking for things without cheese if the only thing it contains that isn’t vegan is cheese, or asking for spaghetti instead of tagliatelle as so to avoid eggs. 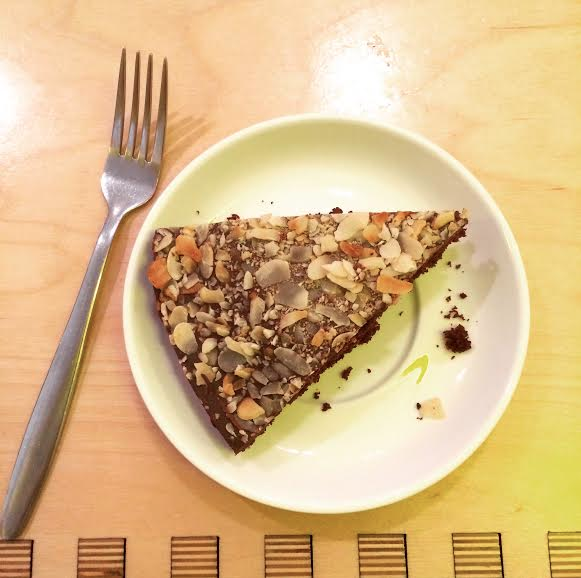 4. Choose the major cities if you are worried about animal-products
The Year Abroad is what you make it. You will speak your target language in the country that speaks that language, there is no doubt about it. Don’t listen to people that say “If you choose Moscow or St. Petersburg you will just end up speaking English”. Every single day I speak a fair amount of Russian, whether it be arguing about plug-prices (yes, really), finding out how to get somewhere, or reading a menu or an article. Contrary to popular opinion, not everyone speaks English. Sure, if they’re going to learn another language at school, it’s probably going to be English, but think how many years you studied French, German or Spanish for, and how much you can actually speak?

There are a host of brilliant vegan-friendly restaurants in St. Petersburg. One of my favourites is Cafe Ukrop (yep, ‘Dill’ cafe, but I think this a joke as I have not encountered any dill). There are two in St. Petersburg, one on Marata Street and one further down. The one on Marata Street is a canteen and my preferred one because the people that work there are really nice (AND do really good cakes), but the one further down, around the Church on Spilt Blood, is pretty tasty and more of a restaurant affair. 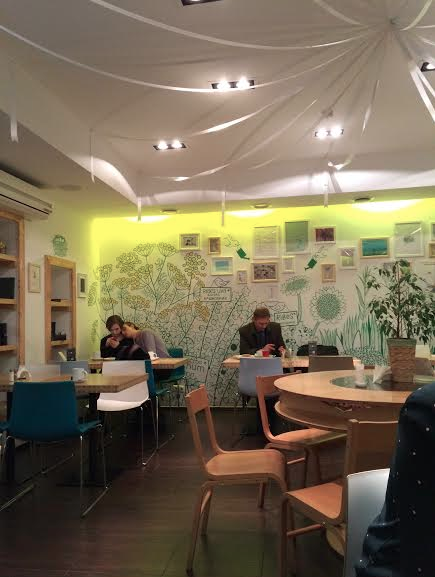 There is also Zoom Café by Gostiny Dvor (not too far from Cuba Hostel), which I went to the first time yesterday, and Las Veggies. The Idiot restaurant (named after that novel by Dostoevsky) is a little pricier but well worth a visit.

I cannot speak for any major cities in France, as I went to Marseille a handful of times, and I didn’t have enough money to travel around, but I plan on visiting France soon, and will write a blog post on being vegan there.

5. Relax!
Realistically, you will never be able to fully eradicate animal products from your life. At some point you will have to take medicine that uses animal products or has been tested on animals, you will accidentally eat something with meat stock in it, or you will do what I did and not realise that something had cheese on it when I ordered it and it was too busy to send it back, or not realise that sometimes guacamole is made with cream. 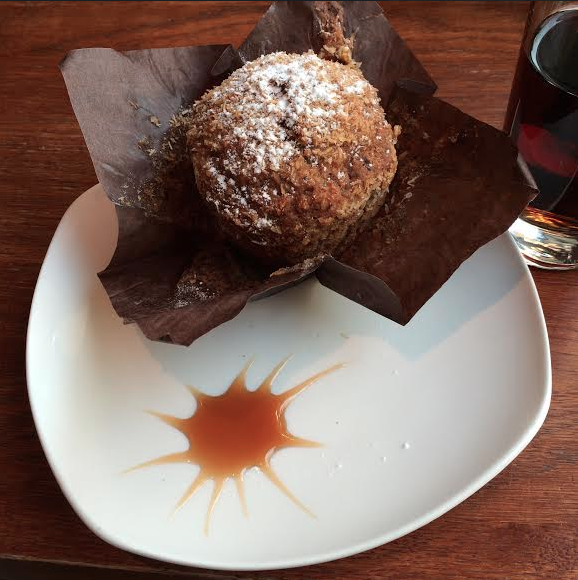 You are there to enjoy yourself and have new experiences. Just because you slip up, you will not become less vegan. Being a vegan is a conscious decision that is reducing your intake of animal products. So keep being your awesome, animal-loving, earth-friendly self and have a great green year abroad!

Have any female Year Abroaders had a similar experience?

Hi, I found that mine were very irregular during my year abroad, most likely due to the huge amount of stress the year entails - I definitely skipped a few at least. Add stress to a change of routine...

The contraceptive pill in Spain?

After a quick google, it seems that there are a lot of different ideas about this.  I've read that you can buy it over the counter, or visit a GP or family planning centre over there, and that you'll...