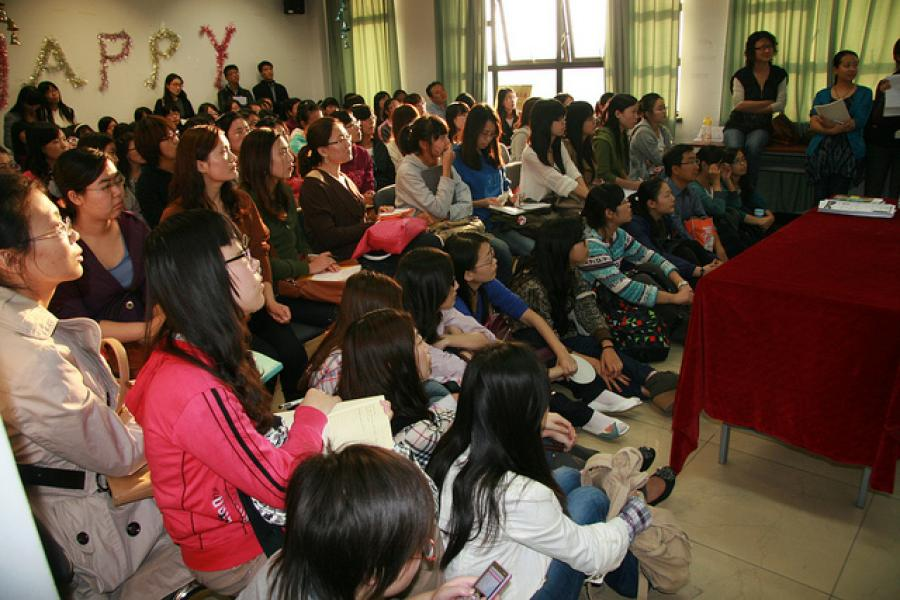 This article was written by Chloe Saunders, published on 1st March 2013 and has been read 7336 times.

Study Abroad Beijing
Chloe is studying French and Chinese at the University of Birmingham, and is spending her year abroad studying at Beijing Language and Culture University. Here's her advice about the classes, food and social life at the university, with some tips about the weather and smog.

Time is everything. Classes start at 8.30am every weekday, a little earlier than what I’m used to in Birmingham. During the winter months getting up when the sky is depressingly dark are difficult and the temptation to stay in bed is huge. However make sure not to be too late as the teachers will count a mere 5 minute overlap as a whole hour’s absence. Fine for a one off but do keep count of the absences as 6 hours missed could mean exemption from the exam. Harsh but definitely keeps you on your toes. Set the alarm!

Classes will be intense. They are all taught in Chinese which can be a shock to the system after a few months break. A lot of the lesson’s content will be a recap of the core book used for that class. It is important to revise the next lesson’s chapter the night before as they will no doubt test your reading comprehension or ask you to recite sentences. BLCU is known for its lengthy vocab lists and on average you will learn 30-40 characters a day. Be sure to revise those as well as the next day there will be a Victorian style dictation on the blackboard with chalk. Very old school but don’t fret if you can’t remember some of the characters, having the willingness to try will mean more to the teachers. Actions speak louder than words, or should I say characters?

One thing I did wonder is what nationalities of students will I get in my class? It will be a complete mix but usually classes are dominated by those from neighbouring countries such as Malaysia, Korea and Kazakhstan. The Malaysians in particular are very good at Chinese and can be quite intimidating during the first few weeks when they’re cracking jokes with Laoshi. However don’t let them put you off as they have probably already been at BLCU for a good year whereas you have just arrived. You’ll soon be the new Lee Evans, it’ll just take a bit of time.

After four long hours of Chinese by 12:30pm your stomach will be growling. There are a number of food options on campus to choose from. The Shitang is very good for cheap Chinese food, especially the third floor which has a wide selection varying from buffet style assorted vegetable and meat dishes, hot pot, chaofan and noodle bar and traditional Chinese soups. A tray full of dishes should cost between 12-18 kuai, however prices can change depending on when you buy and who you buy from. You may get a reduced charge if you smile and say thank you, so let those pearly whites shine! Just be wary that the food can be cold as it is not uncommon for the dishes to be left out for a while best to look out for the dish that’s steaming!

If you don’t fancy Chinese, then you can try a little bakery nestled behind the basketball courts next to the Youyi Friendship store. You can buy egg, tuna, beef sandwiches from 4-6 kuai, a bargain! There are other restaurants on campus too, such as a brilliant sushi restaurant and a quirky Western restaurant called ‘Nowhere Café’ both in the student dorm The Conference Centre.

It’s best to do as much study as you can in the afternoon because come the evening you’ll want to socialise! The student area of Wudaokou is packed with bars, restaurants and clubs aimed at entertaining hardworking Chinese language students. Pyros Pizza and Lush bar are popular among Westerners and stipulate that they sell authentic alcohol. Don’t be enticed by the cheap drinks in Wu Club or Propaganda (£2 Cosmo anyone?) they are mostly moonshine.

If you’re not the clubbing type, Lush bar has several events on each night. The ‘Lush Pub Quiz’ on Wednesdays is competitive and quite challenging but everyone’s a winner as each losing team receives a free pitcher of beer. Lush also have an open mic night on Fridays which is good if you like live music. On Thursdays Pyros Pizza holds a beer pong contest for 30 kuai – you’ll note some people take it VERY seriously and have special ‘moves’ to help them win. Sometimes all you want is a quiet drink over a chat and Carrettos on campus is ideal.

Tucked away down a side street it is probably the nearest thing to a gastro pub you’ll find in Wudaokou, great for a beer and a bit of Western nosh. Some of my French friends got very excited when they heard a rumour that they used ‘real’ parmesan on their Spaghetti Bolognaise. I don’t know how picky you are about your cheese, but I do know you’ll love their ginger tea, sweet, not too sickly and very gingery it’ll be a healthy replacement to Starbucks in the head numbing winter months.

As I mentioned previously, winter in Beijing can be extremely cold. In the first week of January temperatures can plummet to -27 degrees. As well as bitter winds, you’ll find yourself trudging through endless amounts of snow which makes going to class so much more fun. This usually starts around the end of October therefore make sure you buy your winter clothes before then. But don’t worry it should start warming up towards the end of February when life becomes a bit more bearable!

Another thing you’re probably wondering is how bad is the infamous smog? The answer to that is: pretty bad. At the start of 2013, pollution levels were recently reported to be on a scale of 700, and 300-500 is considered hazardous. However no one warns you, it’s up to you to find out. For example, you'll wake up and the sky is a foggy brown colour. Or one day you'll discover you’re wheezing and out of breath. If you are concerned, you can buy masks from the pharmacy in the Hualian Shopping centre in Wudaokou or download the smog app to your iPhone. Here is the Beijing Air Quality Index for today.