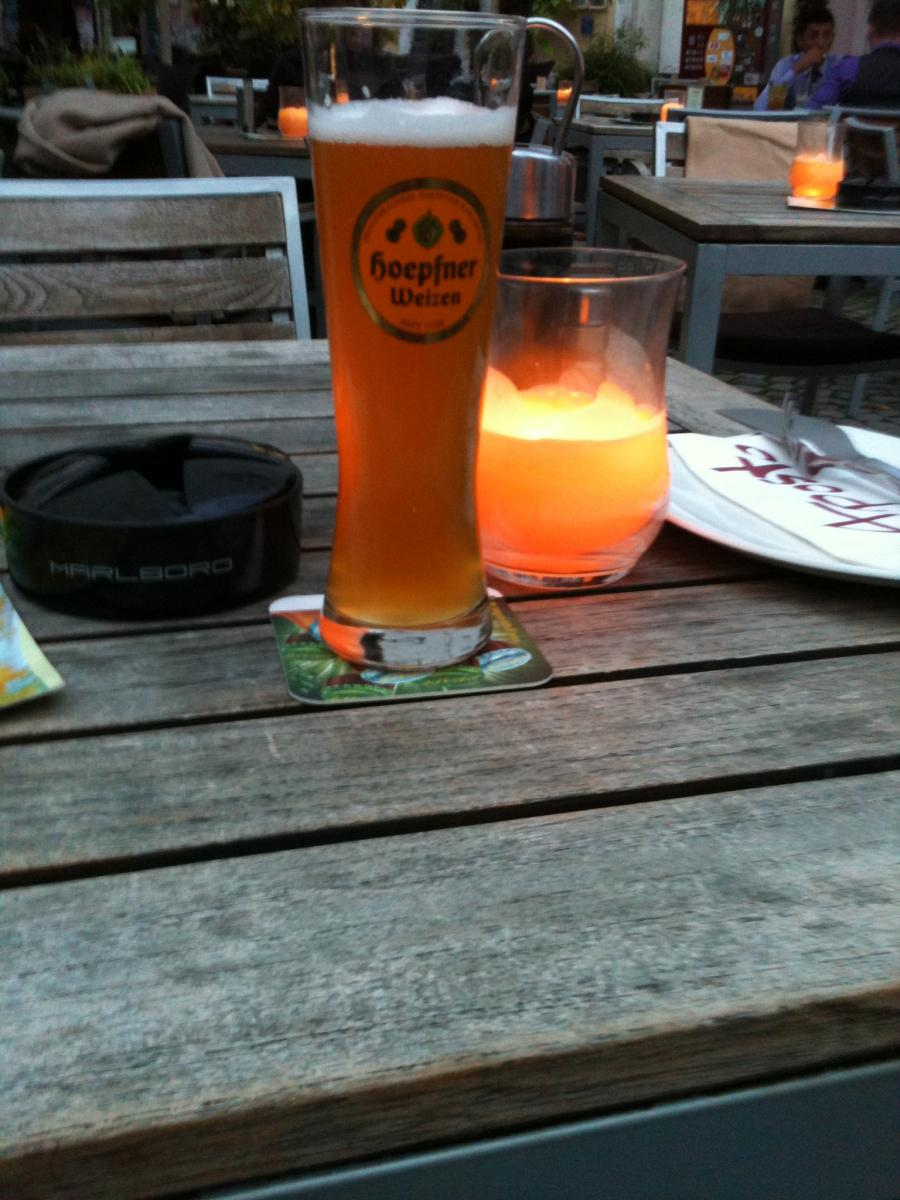 Wouldn't be Germany without..

This article was written by Claire Woolly, published on 28th September 2011 and has been read 22725 times.

Travel Journal
2 days to go until I leave for my teaching induction. Here are one or two reflections of a pre Year Abroad visit to Karlsruhe...

Annnd I’m still at home. But before you start to ponder how much a person can ramble on about Year Abroad activities without actually setting foot out of the country, let me just highlight that I did, for one weekend make it to Kruhe for a quick glance round during some desperate, (and I really do mean desperate), house hunting. So relax, it’s getting more interesting for everyone concerned.

‘Banter’ and ‘Bits & Bobs’ were some little language gifts I proudly gave to the Germans and Americans whilst undertaking the aforementioned weekend visit. Apparently ‘Banter’ is of inherently English origin, ‘Bits & Bobs’ likewise. In return, I stole ‘super-cool’ from the Americans, meaning, er well cool to levels of superness I guess.

There were also a few German phrases I picked up, (useful, considering that’s one of the fundamental reasons supporting a year abroad: language improvement), though I mainly stuck to the word ‘Ja’. Simple, grammatically correct and probably the reason why I am now signed up to play teacher’s volleyball every week, help on a ski-trip, & on one evening in particular, never seemed to be without an alcoholic drink in my hand (!)

So in the last blog I highlighted the slight battle to find accommodation.

Accommodation for the majority of year-abroaders constitutes one of, if not the main concern. I genuinely, naively and perhaps rather smugly was under the impression that I had it all sorted back in July, when a girl replied to my advert for a room in a friendly flat-share.  To cut a long, (and moany) story to its nub and gist, I hadn’t, the girl bailed on me at the last minute.  All I will say about that is that at the time I was pretty annoyed, naturally. However I am aware of my witterings regarding ‘everything happens for a reason’, (propagated in the previous installment), so armed with this theory, I headed off alone for a weekend in Karlsruhe, having surprisingly arranged two flat viewings in the week following the bad news.

Don’t get me wrong, my German is (and darn well ought to be after 8 years of learning) of a reasonable standard. Yet as I disembarked from the plane at Stuttgart airport, with a stomach full of butterflies, a suitcase loaded with every possible google-map of the city, and the walk of someone on some kind of urgent mission (I was actually running to catch a tram, but that sounds a little sad), I made a crucial error. I endeavored to enter the station (still running) through a sliding glass door, labeled embarrassingly clearly as ‘Ausgang’. People considerably less equipped to comprehend the complexities of the German language, will understand this to mean ‘exit’.

Needless to say I rebounded with a force strong enough to rattle the pane, knock me sideways and turn every head in the vicinity simultaneously towards me. (Nearly a week and a half on, I am still sporting an attractive yellow bruise up my left forearm). I had to laugh at myself, unfortunately I was the only one in the station that did, every other expression/reaction registered varying degrees of concern, disdain, and ‘there is an unashamed idiot in our midst.’ So that was my first year abroad moment. Here’s ardently hoping it will not foretell the year to come.

By some miracle, I managed to get the S-bahn to Stuttgart main station, then catch a subsequent train to Karlsruhe with (comparatively) little upset. I asked directions in German to a French bloke, who immediately panicked and asked me if I spoke English, and ear-wigged into numerous German conversations (one in particular concerning the unmitigated ‘drama’ revolving around a lost key).

The only problem here being that I forget to control my facial expressions. Just as the woman reached the climax of her story (the key was actually mistakenly taken by her husband to work) I found myself raising my eyebrows and nodding a long, indulging in an outward display of pride at my comprehension. The woman & her friend seemed (understandably) disquieted by my unnatural enthusiasm. To be honest, I was relieved that I could follow such a captivating tale...So I think this excused my nosiness somewhat. That and the fact I couldn’t be bothered to unlock my suitcase and get my book out.

How do I begin to start describing my first few experiences of the School? The truth is where my experience with accommodation may have tainted those first few YA moments, the school and its welcoming band of teachers has more than compensated! On the sunny and 28 degree afternoon outside Karlsruhe main station, I was met by arguably one of the most genuine and sincere people I have ever come across: my mentor and colleague for the year. He shook my hand firmly, we hopped onto a tram (without paying, I’ll come to that bit later) and I subsequently found myself being whisked round a gloriously grand building, with many a-proud sweeping staircase and even more people willing to introduce themselves. My hand was pumped an inordinate number of times.

I think there is a common misconception, certainly within England, that the Germans do not quite share our sense of humour. Exactly what defines British or German humour I have no idea. Yet as I was acquainted with various teachers, (most of them French-teachers, it’s a bilingual French school), I realised the apparent camaraderie existing between staff members, one which can only be described in English as ‘banter’.

Following my introduction, I was taken out by to a late lunch/early dinner by my mentor, who insisted in paying. He took me on a brief tour of Karlsruhe ending in the main shopping street, where we parted ways. All in all, I managed to impress a certain degree of sophistication necessary for someone who is to be put in charge of assistant teaching kids and teenagers. Such an impression was only mildly undermined by my nearly walking into a tram right at the last minute. I said, ‘are all trams free?’ and was promptly met with an embarrassed mumble, ‘err no, don’t do that,’ I laughed while he looked distinctly discomfited.

In terms of accommodation, I did not succeed in finding anything that weekend. I did however recognise the importance of looking and meeting people face to face.  As I said, I managed to arrange two viewings: the second was outstanding though very popular; the first pleasant, belonging to a couple who had one spare room to let. You’ve heard the saying ‘beggars can’t be choosers’? Well no, they can’t, but the idea of third wheeling for a year with a couple on my own was surprisingly off-putting.

I entertained images of the three of us sat on a sofa watching some lovey-dovey film; them cosily snuggled on one end, me on the other going ‘does anyone fancy popcorn…no, ok, just me then!’ It didn’t seem exactly ideal, but then it was at least a roof! In the end I lost it, waiting for the answer of the second, which was, unfortunately negative. Such is life; it will all work out.

I’m going to bring this to somewhat of an abrupt end. I go on Saturday, and although I have already written this entry for this week, I’ve decided to break this blog about my Kruhe weekend and leaving into two digestible & reader-friendly chunks. The second one will be very, very brief though.

Oh but before I sign off, perhaps a little clarification on the final element of my title is needed, Karlsruhe is the so called ‘Fan City’ not because it houses a load of football hooligans, but because, pretty much all roads ‘fan out’ from, and lead to the Schloss (Castle). I found during my weekend visit, that I gravitated towards the Schloss, feeling a strange and comforting sense of belonging (no I’m not hosting any notions of being at home with royalty). Quite simply, the more familiar I got with it, the more I started to warm to Karlsruhe, and the Schloss was at the centre of that! It might also be worth noting al that when I first plugged into google the name of my school, the Schloss was the image which popped up...I was thus, for a while, under the impression that the Schloss was the school I would be working at and got very excited. This could have been embarrassing.