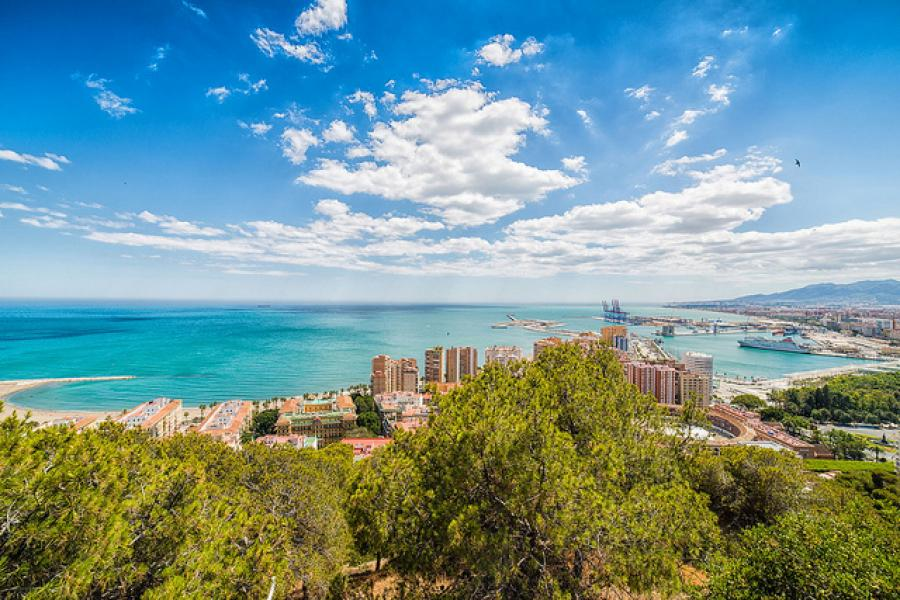 This article was written by Global Graduates, published on 24th September 2013 and has been read 35831 times.

Language Assistant Málaga
So it's finally happened. I have arrived in Málaga. Apologies for the lack of story-telling but it's been a hectic few days.

I caught my flight with my parents (in order to use their baggage allowance of course) at 5.15pm with EasyJet to Málaga. An uneventful flight followed. The drama started when I arrived. My parents are staying in a private residential apartment that is rented out using airbnb, and the woman who owned it was picking them up, and since I was on the way (she lives riiiiight on the east side of the city and I'm on the west) she said she would take me too. However she saw my 2 large suitcases, 1 smaller suitcase and other bags and just said "No. Too much" and after some debate and worrying from parents she said I could easily take a taxi. I asked her to tell the taxi properly where to go in proper Spanish so as to avoid any mistakes. This was a bad idea. She didn't give the driver my street address. Instead she simply told him "Los Guindos". This is not where I live. I live in the adjacent area Santa Paula, not far away but far enough to make directing him alone in broken Spanish a heart-wrenching task. I also managed to embarrass myself on the way, not by crying when leaving my parents which I thought I avoided nicely, but by thinking when he asked me in rapid andalucian Spanish "What is the address?" that he had asked me "Why do you have so many bags?" simply because he glanced in the back when he said it. After about 30 seconds of me rambling he interjected with "NO! The address!!!!" I told him and he said he didn't know where that was. After much stressing and me giving vague directions from my distant memory of Google Maps, he unloaded me on some part of the correct street, outside the wrong flat, with 3 suitcases, took my money and left. This was at around 10.30pm.

I was terrified, alone, and my landlord did not help my saying "Go towards the sea" when I called, considering I was surrounding by huge high rise flats. Eventually after many pathetic texts saying I didn't know where I was, he came and picked me and my bags up, and helped me into the flat, after introducing me to all the other housemates, who are lovely (3 Germans and a Bulgarian girl).

It was a stressful night, and I cannot believe I didn't cry. I am proud of myself for that. I calmly unpacked, lay on (note: NOT in) my bed in the 30 degree heat and at around 1am I slept.

I went to meet my parents the next day, and their apartment owner suggested us meeting outside a McDonalds (presumably because they're easy to spot, hopefully not because she thought we'd enjoy their cuisine) at the Plaza de la Marina. My parents and I agreed to meet at 11.30am. This was not how it worked out. I got off my bus at the Alameda Principal, the main street in Málaga, thanks to helpful instructions from my Bulgarian housemate before I left, and the beautifully helpful signs with rolling marquees on the buses and the kindness of the driver himself. From there I was lost. After seeing no McD there, I walked down to the seafront street, up and down looking for this thing. I eventually took it upon myself to incur, I'm sure, horrendous charges on my phone to use Google Maps for a split second to locate myself and to see where I needed to be. Plaza de la Marina did not turn up. I wandered down to the Paseo de Espana, which is BEAUTIFUL.

Even in the 30 degree heat reflecting off white marble floors, I spent about an hour alone, texting my mom expensive texts until eventually I got bored of the Paseo, and wandered into the park behind - lovely. I realised the reason my parents were struggling to get a bus - there was a MASSIVE bike thing happening and blocking off half the roads - THOUSANDS of children and parents cycling the waterfront road. About half an hour after that they rang me and I could see them about 20 yards away. I don't think we've ever been so happy to see each other.

What followed was a really nice day exploring the city, them coming to see my flat, which is lovely and clean, great bathroom (which is v. important to both me and my mom) and a bright room. We then noticed the Parque del Oeste is literally metres away from my flat, so we had a gorgeous wander through that to the beach, where we arrived at about 5pm, still in 30 degrees, and stayed till about 7.30ish, when my mother's pull for food proved too great and after getting an ice cream (tradition of the family) to wander down to the seafront and then catch a bus back to the Alameda Principal, and into the "historic center" for dinner, beers and a spanish guitar player. Amazing. At about 10.30pm, my parents left me at my bus stop where I struggled not to cry. Whilst waiting for the bus, a woman told me in very quick Spanish to get in the queue (I believe). Now I am British. We wrote the book on queueing. I gave a quizzical look, since I had arrived before her and surely she had taken my place. In any case I tried to explain that sorry, I'm British and I don't understand, please talk slowly. Cue a stream of Spanish expletives, from which I could only pick out, "What is your problem?!" I caught the bus, she stared daggers at me the entire way home, and I struggled not to cry again.

I am not ashamed to admit that the size and fact that I'm alone in Málaga terrifies me. After the taxi palava and then that I was at a point where I was very scared and wished I was with my mom. Pathetic. I also hated myself for not revising the language more, and just not being Spanish. I assume this is normal for people doing this sort of thing.

In any case, what excited me was that today I was going to see my beautiful Spanish contingents in Ciudad Real, Raquel and Ángela. The fact I'm writing this from Ángela's guest bedroom proves why I have restored my own faith in myself somewhat. My train was at 9.45am from the train station Málaga Maria Zambrano. I found it on Google, got the bus and asked a lady in Spanish which was the best stop for the station, and she told me, and I understood her. I also found the station once I alighted the bus, in good time, and then asked polite staff members which one my platform was. As weird as it sounds to say "it worked" it felt like it was a bit of a magic trick! I had a short 2-hour journey on a comfortable train, with incredible scenery of cloud topped mountains, rolling hills and interesting cities and towns. I loved every minute. After which I was met by Ángela and Raquel - I've never been happier. They took me to Ángela's family's apartment, where I met her mother, also Ángela, who is lovely and very kindly speaks clearly and slowly for me. I felt at home immediately. We then went for tapas (fried squid and patatas bravas for me) and beer (Cruz Campo - delicious), and had a great catch-up with the girls, before returning to the apartment for a glorious lunch with Ángela, her father and brother. We then went for coffee in a beautiful square in front of a monastery, and I was shown around the shops and Raquel's halls of residence. Lots of fun, such a bustling town with modern shops interspersed with old buildings and churches.

I spent the evening watching TV with the family and it was bliss. I feel so comfortable with them, I love it. And the more I hear Spanish from them, people I know, the less daunting it seems.

Maybe improvement in my ability isn't far off.