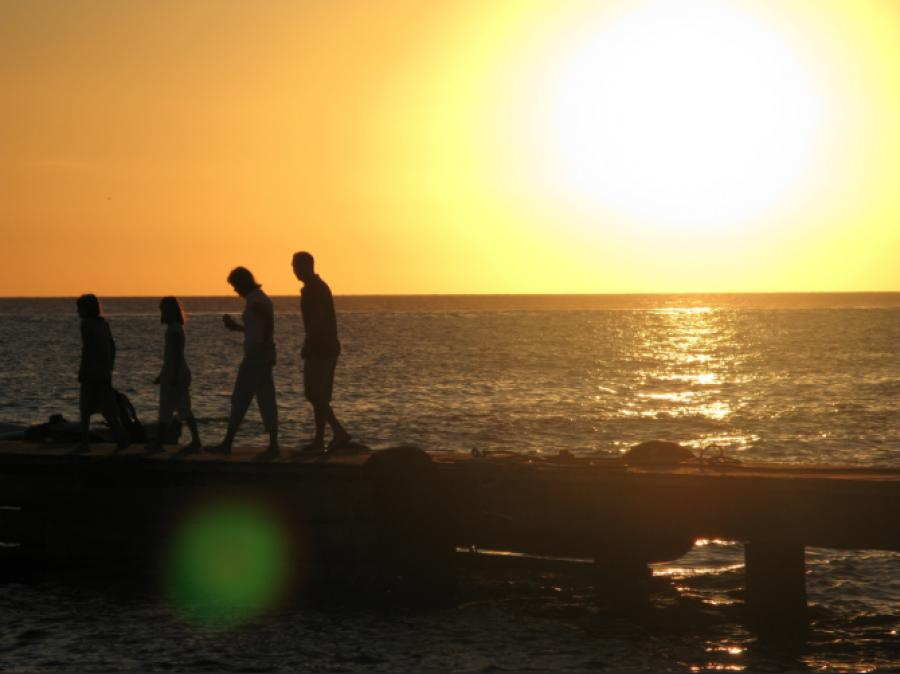 This article was written by Lisa Bruce from The University of Edinburgh, published on 11th September 2015 and has been read 3440 times.

Lisa recently returned from a year abroad in Paris. After a discussion with her parents about the lack of useful information online for the families of year abroad students, she decided to interview them about their perspective of her time abroad...

David, my dad, works in HR. Kirsten, my mum, works in learning support in a primary school. Megan, my 17 year old sister, is in high school.

1. Where did your daughter go?
David: Lisa went to Paris in France.

2. How long did she stay there for?
D: She stayed there for 10 months, from August to June.

3. What did she do out there?
Kirsten: She studied at the university Paris VII Diderot.
D: She also had a part time job teaching children English.

4. What were your main concerns?
D: Finding accommodation.
K: Would she settle in? Would she enjoy it? Was it safe? How much money was it going to cost? Would she meet people?

5. What did you do to try and cope with her year abroad?
D: I went with Lisa to try to find accommodation and get some level of familiarity of the city. We skyped regularly (initially daily) and kept in contact via Whatsapp so we knew Lisa was alright. Having helped Lisa find accommodation, we knew the area she was living in and that made us feel better because we knew we’d set Lisa up in a safe area. We also knew where she was staying was on good transport lines to get around the city.
K: I think sharing experiences with others definitely helped. Lisa kept a blog which helped too as we understood what was going on better. It's all to do with communication.
D: And Lisa came home at Christmas and we had regular visits to Paris to see her.
K: It was good to know her friends from home came to visit her throughout the year and we liked seeing photos of her enjoying herself on facebook and Whatsapp.

6. In hindsight, do you think you were right to worry as much as you did?
K: Yes.
D: Yes. But with hindsight, I think we could have eased the worry by sorting the accommodation earlier- she spent a long time chasing after student residences right until she left but I think we should have given up on it earlier. I think it would have been an awful lot easier leaving here knowing that she had somewhere to stay. So under the circumstances, I think we were right to worry.
K: We weren’t worrying about anything unrealistic at the end of the day.

7. Is there anything you feel you could have done differently?
D: I think we could have made our decision sooner about the accommodation. We went out in April to see where the university was and the area around it and we went to see student residences. We’d spoken to the manager of a really nice one, who assured us our application would be processed, but Lisa never heard back from them, nor lots of other places she’d applied to.
K: We thought the accommodation would have been sorted by Easter but Lisa didn't even know her starting dates then. The ideal situation would have been that the university - either university - would have given Lisa some more support, rather than just waving her goodbye and leaving her to get on with it. The support from the universities was shambolic.

8. Would you recommend a year abroad for students?
K: Yes, absolutely. Once everything was all ironed out and Lisa settled in, from our point of view, she seemed to really enjoy the experience and we certainly enjoyed the experience of visiting and hearing about it.

9. How do you think your child benefited from a year abroad?
D: I would probably say she's become more independent and more confident.
K: She’s made very good friends and experienced a different culture.
D: She got to live in one of the biggest and most famous cities in the world and she loved it.
D: Doing a year abroad gave her the opportunity to travel.
K: She got to work teaching English which she thoroughly enjoyed.
D: Overall she really embraced the French culture - we said a couple of times when we visited that she seemed to have become quite French in her behaviourisms and she blended in so well.
Megan: She maintained positivity - she knew she would have to make the effort but never said it was too much, she always embraced it and got on with it.
K: She embraced everything with enthusiasm and it's great to see your daughter being so enthusiastic about the changes and challenges she faced.
D: And her French has obviously improved too!

10. How do you think you benefited from her year abroad?
K: It was an ideal opportunity for us to travel as a family and do different things together. And we benefited because Lisa was then in charge of showing us around.
D: We've benefited by becoming regular customers at a lovely hotel! And when we were visiting, whilst we went as tourists, we kind of felt like we were living there as well.
M: We benefited because we were doing different things in Paris, we weren’t just seeing all the main sights. We got to see a different side of Paris.
K: We also actually had a better knowledge of what was going on in France.
D: I joined Facebook! And I read ‘The Local France’ on it.
K: And now David has lots of metro memorabilia as gifts! And I think for us we went back to a city that I probably wouldn’t have thought to go back to, certainly not as many times.

11. Would you like her to go abroad again?
D: Yes. But only if she funds it herself!

12. What other advice would you give to parents whose children are going on a year abroad?
D: It's a cliché but don't panic, things will sort themselves out. From Lisa's experience it took a lot of effort on her part to get the most out of the year, and she couldn’t just rely on the UK way of making friends, she had to put a lot of effort in. Also, for your own sake, be there at the start and at the end and visit often if you’re close enough that you can afford to.
M: It wasn’t as bad as I expected because she hadn't gone from living at home to living in Paris, we were used to not seeing her every day since she's at uni.
D: I think it's really important to talk about the year abroad regularly before you go; as a parent you've got to show a real interest and talk about it for everyone's sake. It was also a good idea to have a big send off before she left, people were all happy to see her leave for a big adventure and they were encouraging her to go!

How to find accommodation in Paris?

Leboncoin is a good website, not too dissimilar from Gumtree :) if you are going to be studying/a language assistant it might be worth signing up to a Facebook group and asking if anyone wants to join...