A year (abroad) in Provence 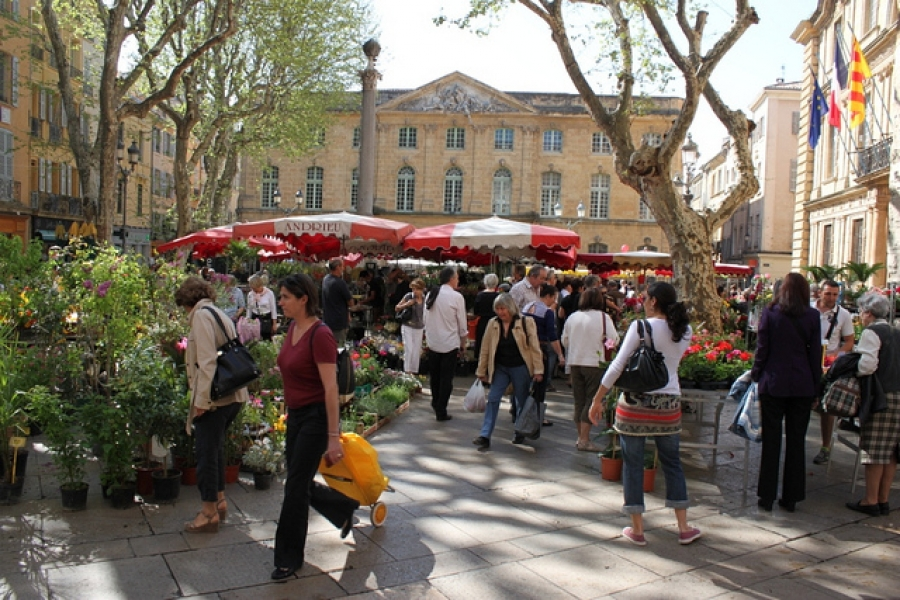 This article was written by Alex Hepworth, published on 10th May 2011 and has been read 7079 times.

York Uni Aix en Provence
Alex studied French, German and Linguistics at York University between 2001 and 2005 and chose to spend her year abroad in Aix-en-Provence having previously visited on an A-level art trip and fallen in love with the town. While there, she studied at the Université de Provence, taking modules in literary translation, journalistic translation, linguistics and French culture alongside language courses for Erasmus students.

I arrived alone in Aix-en-Provence after a flight, a coach trip and a taxi. By the time I got to the university, it was dark and the accommodation office was closed. I managed to pick up a key at reception, only to be told my halls were on the other side of the site. I had a rucksack, a laptop and a 32-kilo suitcase (thank you, British Airways!) and, needless to say, it was raining. When I got to my room, with its bars on the window and peeling wallpaper, I almost cried. You wouldn’t think this would be the start of the best year of my life...

I spent my time in France studying at the Université de Provence in Aix-en-Provence, a stunningly beautiful spa town with more than 100 fountains. (Check out the mossy hot spring on the main street, the Cours Mirabeau – it is always warm!) I had already been to Aix once before, on a school art trip, and had fallen in love with the place. There is plenty to see and do if you are of an arty disposition, especially with Cézanne’s atelier just north of the town. I was so inspired by a visit there that I chose to write a 5,000-word essay on Cézanne for my Art A-level and vowed that I would come back to Aix one day. When I did return for my Erasmus year, one of my first trips was to climb Mont Sainte-Victoire, the mountain he painted more than 60 times.

I started the year with an intensive four-week language course, studying alongside other Erasmus students. It was a great way to meet people and brush off the cobwebs after the long summer holidays, and these four weeks alone did wonders for my French. Once the semester started, however, I had a bit more freedom to get away from the other foreign students – something I would highly recommend – and take some modules with (gasp!) real French students, including various linguistics modules and literary translation, which I couldn’t have survived without my trusty Collins Robert French Dictionary though we weren’t allowed to use it in the exam...!

Life in Aix was fantastic, with lots of options for day trips, including to Marseille, Cannes, Avignon, Arles, Monte Carlo, Nice and St Tropez. I also seem to remember sunbathing into November, which made a change from York! Aix itself has no shortage of entertainment, with three cinemas, two of which play art-house films, and an abundance of bars, cafés and restaurants. My favourites were La Belle Époque on the Cours Mirabeau and Happy Days on Place Richelme.

Be warned, though, Aix is said to be the second most expensive place to live in France after Paris, so a lot of the shops are smart boutiques. That’s not to say you can’t live there as a student, as accommodation in halls is very cheap and you will get some money back from the Caisse d’Allocations Familiales. I also did my food shopping in a discount supermarket, ED, on rue Lapierre or ate in the university canteen in the Cuques residence for a few euros. It’s best to do clothes shopping in Marseille, where you will find your standard high-street shops.

I enjoyed my year abroad so much that, once I graduated, I couldn’t wait to get back to France. I went on to spend six months in Beauvais, Oise, as a language assistant in an IUFM (a teacher-training college) and followed this up with four months in Bourges, Cher, on the Leonardo da Vinci scheme, where I stayed with a host family and spent three months working as a commercial secretary in an estate agency. It was this year that really consolidated my language skills. Having to answer the phone and give people details about properties in French isn’t easy!

It’s a while now since I was in France, but if I had two tips they would be these:

Take several photocopies of your passport. The French love anything that involves a form, and you will be surprised how often you will be asked for a copy. Don’t leave your dictionary at home just because it’s big. I bought the latest edition of the Collins Robert French Dictionary and used it during my Erasmus year and when I returned to France after university. Take it in your hand luggage if you are flying with a budget airline!

4 fun ways to get out of your comfort zone abroad