A Week in the Life: Studying in Verona 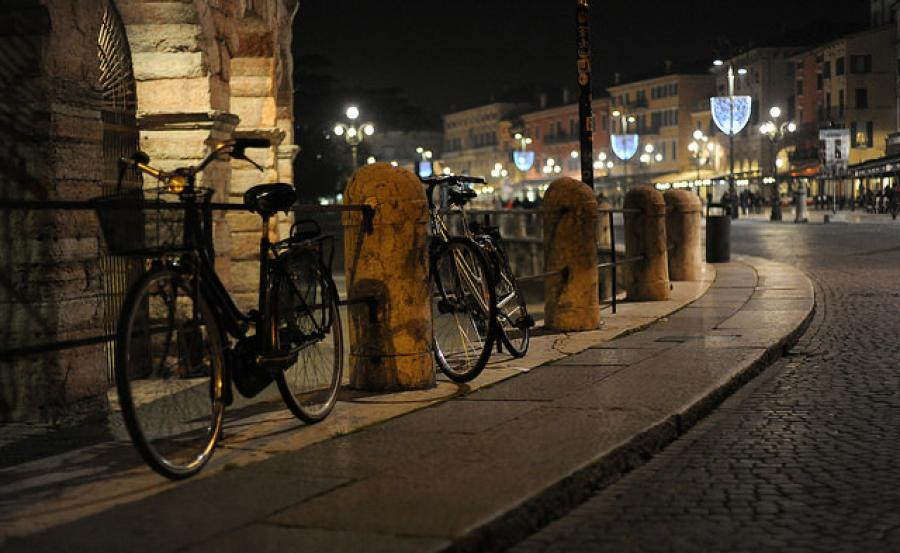 This article was written by Megan Evans, published on 5th May 2015 and has been read 6226 times.

Megan Evans is studying for an MA in French and Italian at the University of St Andrews. She is spending an Erasmus+ year studying at Universita degli studi di Verona, Italy. Here's how her week usually goes...

After a fun weekend, Monday is bit of a shock to the system. My classes start at 10am, which is later than my other mornings, giving me a precious extra hour of sleep. The day starts with a French Literature module. It’s slightly strange studying French taught by Italians, but after a while you get the hang of the language-switching. The class is surprisingly busy for a Monday morning, but the lecture is interesting, the professor cracking jokes to lighten up the first class of the week. After an hour and a half, the lecture is done, and I normally head home for a few hours, stopping by the fruit and veg market for cheap and fresh groceries. I can’t believe how much cheaper food is when you buy it from the markets and specialised shops instead of the bigger supermarkets.

I head back to university for 2pm, when I have my second class of the day, French Language. I don’t mind this class, but French Language is a misleading name. It focuses more on linguistics than the language itself, which can be quite difficult, but a plentitude of power-points is extremely helpful. I’ve noticed Italians tend to write everything in class, whereas back in St Andrews, the sound of the professor is almost drowned out by the tapping of keyboards. Whilst it reminds me of being back in school, I prefer to take my laptop anyway - its very useful if you need to word-reference the occasional word/phrase/entire lecture!

Monday nights are pretty relaxed. After 3 hours of listening to a combination of Italian and French, I am quite content to chill out, watch some TV and chat with my Italian flatmates.

Tuesday is the first in a three-day onslaught of early morning 8.30am starts. Starting again with French literature, the class numbers dwindle from Monday morning, but again, the class is fairly interesting. The texts themselves aren't that difficult to read, but discussing them in Italian can be quite tricky. Despite the early morning start, at 10am, that’s uni done for the day.

In the afternoon, I teach English to a family. Walking along the River Adige in the sun to their apartment feels like I’m on holiday, instead of walking to a (kind of) job. Although the tutoring is fine, it’s made me really respect teachers - and also really not want to be one. I quite often find myself trying to explain English grammar to the children, and getting stuck as I’ve never actually learnt it myself. Getting by for a couple of hours often results in the reward of homemade food by the children’s mum - Tiramisù, yes please.

Another 8.30am start, but this time for another round of French language. After this class is done, I sometimes head to the uni library to do a bit of work. Verona University is very different to being in St. Andrews - we have no coursework, and the grades are based on the exams. I find this quite difficult, as it’s hard to motivate yourself to study when you have 3 months of nothing, and suddenly 3 exams in one week. I try and do a bit of studying each week to make my life easier when it comes to exams.

Wednesday afternoons are quite relaxed, as Wednesday night is a big night for the university students. The Erasmus organisation in Verona usually organise a night out every couple of Wednesdays, with a private bus to the venues. Its cheaper and easier to go with the ESN, so its pretty useful, especially when you’re new to Verona. The nights out are a lot of fun - the nightclubs are as cheesy as you would expect, with a closing time much later than in the UK. One very important tip - when you go into the club they’ll hand you a card. This is how they control the payment for entry, so when you leave, they’ll scan your card and charge you for how much you’ve spent. If you lose it they can charge up to €100, so make sure you keep it safe.

An 8.30am start is never welcome on a Thursday, but again my classes start with French literature. I study more French modules than Italian modules in Verona, as I am studying for a Joint Degree, and my home university only allows us to stay in one of the countries. As soon as that lecture finishes, I have a European Geography lecture - the first of my two Italian modules. I am interested in European Geography, but I do find this lecture drags as it is quite hard to understand. Luckily, I had spoken to the Professor in advance, so he’d filled me in on the program. Its a good idea to tell your professors you’re erasmus, as they often give you advice and in some cases, a slightly different course program.

This is my busiest day, and after a mad dash back for lunch (I live a 10 minute walk from the uni), I head back for a History of Philosophy Lecture. The lecturer usually turns up about 20 minutes late, so there’s a lot of waiting, but it’s fairly interesting and helped by the fact I studied quite a lot of philosophy at school.

Thursday evening presents the option of the Erasmus night at one of the bars in town, or staying in. If I’m awake enough, the night is fun but more relaxed than the one before. It’s a good place to meet people when you first arrive.

A leisurely start at 11.30am, I finish off the week with either History of Philosophy or Geography. Unfortunately the two modules clash, so in true Italian style, I have to choose which one to go too. Normally I just alternate the weeks and hope I haven’t missed too much.

After this, I often go for lunch with friends in the centre of the city. Its easy to find good, cheap food in Verona, but its easier if you avoid the busy centre areas which are a haven for overpriced tourist menus. Friday evening often involves apperitivo - an Italian invention which should definitely exist in the UK. Paying for one drink, you get a big selection of food for free, and who can really say no to free (sort of!) pasta and pizza.

On the weekends, I’ll quite often visit other places. Verona is smack bang in the centre of northern Italy, so it's easy to visit other cities like Milan, Venice and Bologna by train. Italian trains are cheap and pretty fast, so travelling isn't too expensive.

If I choose to stay in Verona, I’d often spend weekends strolling around the city, shopping and sightseeing. There are often things going on in the centre of town, so you never quite know what to expect. I often go for dinner with friends - we’ve discovered the best pizza place in Verona and go there far too often.

Sunday is normally quite relaxing. I’ll usually do some work at home and organise myself for the week ahead. Strangely everything stays open on a Sunday, whilst most things close on a Monday. This is true until about 4pm, so if you forget to buy food for dinner before then, there are few options available. If it’s sunny outside then its nice to go into the centre, especially Piazza Erbe, as there is usually something happening on a Sunday.

The 8 stages of splitting your Year Abroad