Home Articles A Week in the Life: A Language Assistant in Germany
Share
Tweet
Write for us 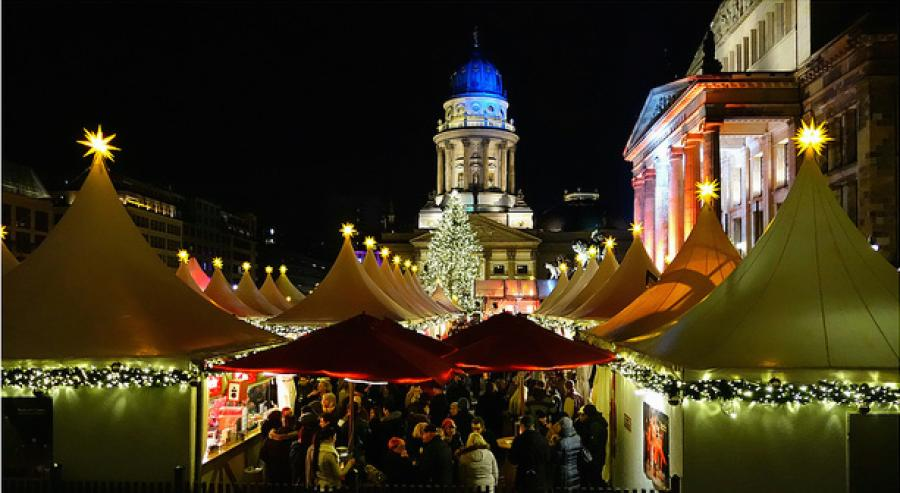 This article was written by Helen Long, published on 19th December 2014 and has been read 5837 times.

Helen Long studies German and Spanish at Nottingham University. She is spending the first six months of her Third Year Abroad as a Language Assistant in a primary school in Berlin, before relocating to Madrid to spend five months working in a university. For more of Helen's adventures, check out her blog or follow her on Twitter.

Ah, Monday. You’re looking as repulsive and unwelcome as ever. Then again, in a not infrequent turn of events, two of my four lessons have been cancelled. That is unless I’ve read the timetable wrong and I now just look like a sassy British student who ain’t got no time for class 3 or 5. In one of the classes that I did have, I gave a little presentation about Christmas in England. Until I started working at a primary school I had no idea how excited 7 year olds get about everything and anything. I had 2 kids laugh about the word “water bottle” for 10 minutes straight the other day, so you can imagine their utter amazement when I showed them shiny pictures of Christmas trees and mince pies. They almost lost it when I pulled out a real-life cracker.

I couldn’t decide whether to devote tonight to a pub quiz or a German conversation group. Essentially, I could pay €5 to have a two-hour conversation about deep and meaningful topics in German, or pay roughly the same and sit in a pub and drink beer. As the mature, dedicated language student that I am, I don’t think it needs saying where I ended up spending this particular Monday evening. 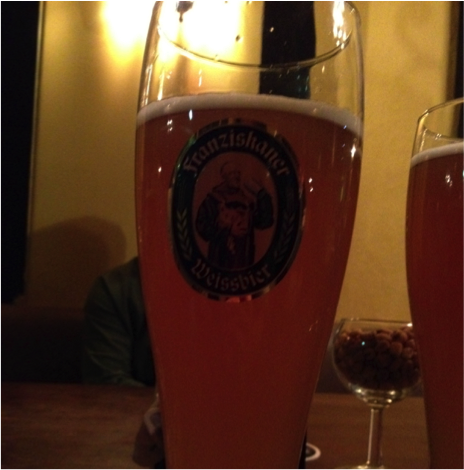 More lessons were cancelled today. In fact, I can’t remember the last time I completed all my allotted 12 hours. This isn’t me regularly bunking off work so I can go get a pic ‘n’ mix from the corner shop - either the class is substituted or the teacher tells me not to come. Tuesdays, for example, usually involve 3 back-to-back lessons starting at 8:10am. Today, I started at 9:00 and finished at 9:50. Something about the dentist visiting the kids. My one lesson was with a year 6 class, in which I took out 3 children at a time and, under the teacher’s orders, read a story with them. I should mention that I do very little in the way of actual teaching; I’m just there to… be English. Today, I was asked the gem, “Why do you say some things differently?” At first I thought this genius child had noticed that I have a British accent, as opposed to the American one they’re used to hearing. But nope, he was merely referring to my accent when I speak German. I was baffled, especially as he had also asked, “Are you really from England?” He must have thought I was a German with some weird speech impediment.

Since Wednesdays are the work of the devil (five lessons between 8:10am and 4pm), I tend to avoid doing anything too exciting on Tuesday evening. Instead, I’ve merely been preparing a few things for school tomorrow, for example frantically Googling why on earth we actually set the Christmas pudding alight. I am still none the wiser. 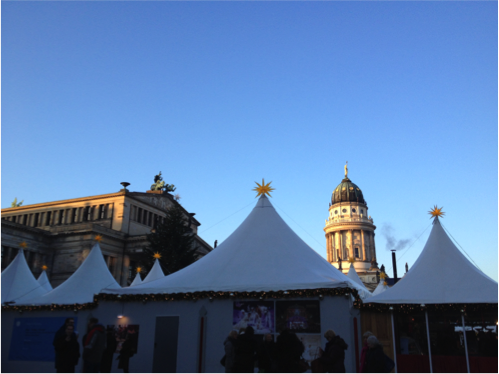 In a bold move that shocked the world, yet another of my lessons was cancelled this morning and so I’ve just had the pleasure of waking up at the ridiculously late time of 8am! Still, it’s 9:15 now and on with the morning commute we go. To get to work I have to take an S-Bahn for 20 minutes and then an U-Bahn for all of 30 seconds. However, due to all the walking between stations and time needed to change, I generally have to set off this early for a 10:10 am lesson. Lovely.

Today’s lessons went by quickly and quietly; just how I like ‘em. Also, a huge congratulations to Berlin for its first snow of the season! Despite the fact that they see a whole lot of the cold stuff every winter, the kids went nuts. I did too, but when the teacher scolded the children for “staring out the window as if they’d never seen snow before”, I quickly stopped staring out the window and pretended to very much have seen snow before. It was a challenge. I’m back home now and getting ready to pop into a friend’s art exhibition she’s involved in tonight. Due to the weather I assume I’ll be opting for the double outfit once more, which involves me wearing layers under my layers. 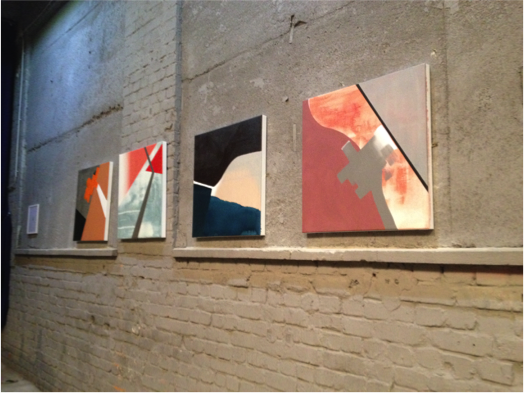 After an extortionate 7 hours of work spread across 3 days, school is finally done for the week! In an act that surprised even myself, I still managed to haul myself out of my flat and onto a tram, ready to embrace some further Christmas shopping. The prize for the best-named shop that I came across undoubtedly goes to ‘Nanu Nana’. I’ve now got a couple of hours to kill before I have to leave again, so I really should use this time to read some more of my book. I’m currently reading “Gone Girl” by Gillian Flynn, which I would definitely recommend. Since I’m reading it in German it’s probably even better than I’m giving it credit for, because who knows if I’m following the story correctly. It could be about polar bears for all I know. 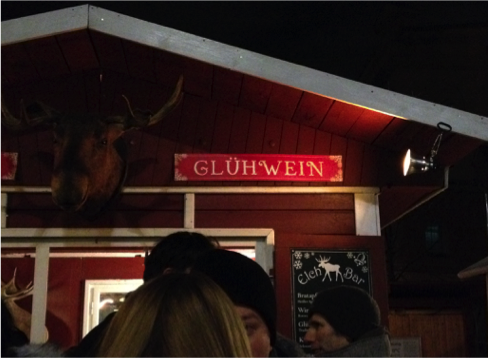 Last night I met up with an American friend and we had a mooch around the Kulturbrauerei Christmas Market, which of course equated to more mulled wine and crepes. This is getting to be a problem. As I also have Fridays off work, today I’m meeting up with a German friend to go ice skating at Potsdamer Platz. As I don’t have a part-time job or hobbies or basically anything useful with which to fill my spare time, I generally try to arrange outings with friends or explore the city a little. If I’ve learnt anything here, it’s that very little is placed straight in your lap, the rest you have to chase for yourself. Essentially, some clichés are frustratingly true: you get out what you put in.

Back in this igloo of a flat and severely contemplating having a nap. Like a toddler. I had a lovely day with my friend Antje and I’ve now got a few hours to kill before I head out again. Some guys I know, who also just happen to be a band, are performing their first Berlin gig tonight, so I shall show my face there. Unfortunately, I didn’t get the best night’s sleep last night. You have no idea how terrifying it is to be woken up in the middle of the night by the doorbell buzzing loudly and relentlessly. When it didn’t stop, I reluctantly slinked out of bed, grabbed the telephone thingy and hesitantly murmured, “Ja…?” The reply came in the voice of my flatmate saying, “Helen? It’s me. I’ve lost my key.” 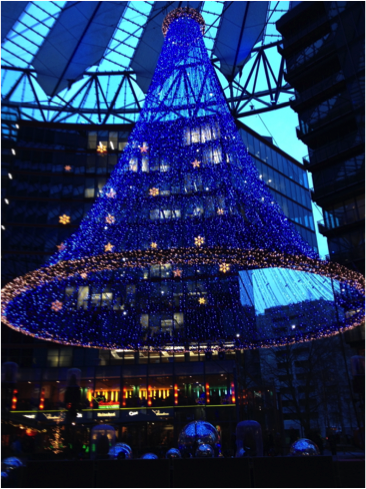 Despite claiming I was just going to “show my face” at the gig last night, we all ended up going back to the band’s flat for celebratory drinks and I somehow found myself on a tram home at 5:30am. The evening itself was cracking. The boys played well and the venue had a dog you could stroke so, you know, doesn’t get much better than that. The absolute worst thing about going to any bar or club in Berlin is coming home with your clothes, hair and skin just oozing cigarette smoke. Anyone would think the smoking ban expired every night around 9pm. Anyway, I’m about to leave to meet a different friend to visit yet another Christmas market. I don’t know if my liver can take any more mulled wine, but it would be rude to refuse…

The mulled wine happened. Obviously. The Christmas Market at Schloss Charlottenburg is hands-down the best I’ve been to in Berlin. It’s absolutely huge, with the little huts expanding for miles in either direction and all sorts of confectionary laid out in an annoyingly inviting fashion. It’s also really pretty. I’m currently kicking myself for making a serious German faux pas when I was chatting to my German friend. I was trying to explain that I didn’t want to buy all my Christmas presents in Germany as I’d have to drag them all back to England with me. Unfortunately, I added an unnecessary prefix to the word “schleppen” (“to drag”) and ended up using the word “verschleppen” (“to abduct/deport/transport slaves or convicts”). Consequently, I ended up saying the equivalent of, “I’d have to very violently kidnap the presents.” Why am I learning this language again? 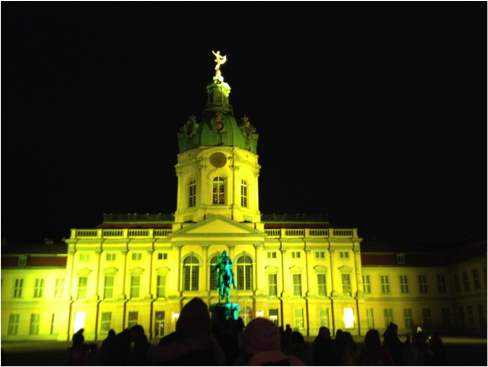 Good morning! Today is going to be insanely boring so if you want to sign off now, thank you for reading and I wish you a safe onward journey. If you’re still here, I congratulate you on your courage and I promise you, we will get through this together! Since the whole of Germany goes into hiding on Sundays, all I can really achieve is to wash all my clothes, prepare some stuff for school next week and probably make a couple of Skype calls back home. Therefore, I have assumed my usual position at my desk and am currently trying to learn the actions to “When Santa got stuck up the chimney”. I’m genuinely having a great time.

For me, the hardest thing about being a Language Assistant is that I’m not in any way teacher-minded. I struggle to think of fun ways to teach vocab or games that the kids could play. Luckily though, if like me you find yourself struggling for lesson plans, the British Council Teaching English website is ridiculously useful (this message isn’t sponsored by them). You’ll also find that teachers talk to each other. I have been approached many times with the phrase, “I heard you did [English-related activity] with Frau [other teacher]. Do you think you could do that in my class?” Sure, great, although I’m now very aware that they talk about me in the staff room.

Well, I am well and truly worn out, so I’ll sign off now. Thank you for reading and I hope I have given you at least a small insight into what being a Language Assistant is like!

by Jessica Wells
Living and working in Germany