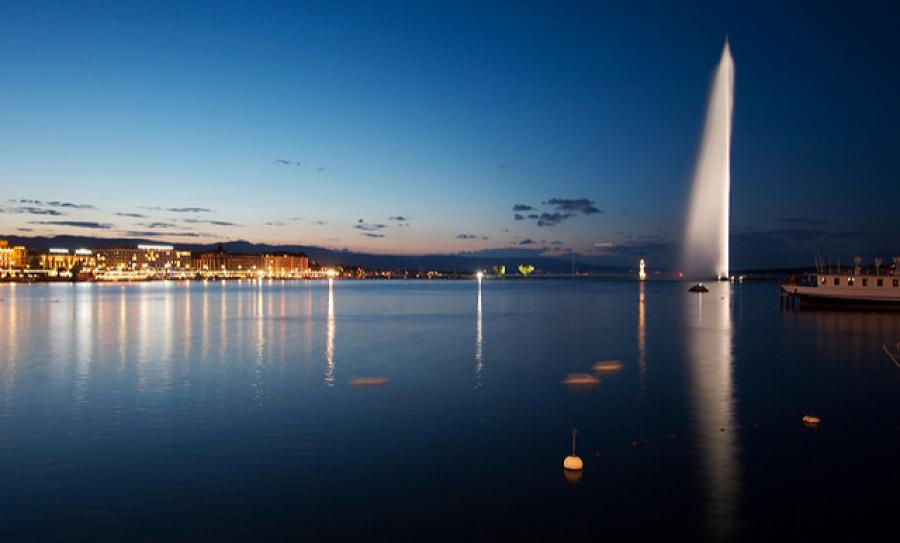 the Jet d'Eau by Geri

This article was written by Emily Maybanks from Swansea University, published on 18th August 2016 and has been read 3735 times.

Air travel… Anything to do with air travel. Before my year abroad started, I was terrified of the thought of travelling by aeroplane, and navigating airports on my own. Nine months later, I’ve grown to enjoy people watching in airports and staring out of aeroplane windows.

Bologna… For the first term of my year abroad, I studied at the Università di Bologna campus in Forlì. Bologna is less than an hour’s train ride from Forlì so I enjoyed going to visit Bologna a few times during my time in Italy. It’s a very impressive city, especially with the towers which I didn’t climb up. Bologna was also the airport I flew to and from as well as staying in Hotel Internazionale in Bologna when my Mum came to visit me, and the very lovely waiter in the hotel bar who made us both snacks when we were having cocktails in the bar and he said that my Italian was very good.

Creative Writing course… At the Université de Genève, I’ve been doing a creative writing course as an extracurricular activity. Even though the course has been in English, I’ve really enjoyed improving and developing my writing skills. Writing has always been a passion of mine so being able to do something I love on my year abroad has been special and enjoyable.

Development… I think the term development is an interesting way to look at my year abroad, for example, how my self-confidence has developed since September, and my language skills. I think I’ve developed quite a bit of confidence in myself which I didn’t have before I started my year abroad.

Français/French… One of my languages. I’ve enjoyed improving my French language skills, especially my written language competence in French.

Geneva/Genève… Geneva is where I’ve been spending my second semester, studying at the Université de Genève. I’ve enjoyed spending time in Geneva, particularly being surrounded my beautiful scenery in the way of mountains and the lake.

Italy… Before my year abroad, I had never been to Italy, whereas I had been to Switzerland on holiday. Now, I’ve lived in Italy for three months and seen some beautiful places; Bologna, Verona, Rimini, Venice and Milan.

Jet D’Eau… Geneva’s famous water fountain. I love looking at the Jet D’Eau. It makes me think of how powerful water is and the Jet D’Eau just looks perfect on a sunny day.

“Keep calm and carry on”… This has become the phrase I’ve told myself a lot over the past nine months. When things have been tough, it’s important to keep calm because panicking and stressing tends to make the situation worse.

Languages… In Geneva in particular where it’s very international, it’s always interesting to hear such a variety of languages each day; French, English, Italian, German. This year has inspired me to keep studying languages and to learn new languages in the future.

Modena… In Italy. It was close to coming home for Christmas and I’d gone to Modena with some friends and we found this wonderful restaurant where they were doing a lunchtime buffet. Having lived off pasta and pizza for the past couple of months, it was amazing to find out that this buffet also did food like roast potatoes, chicken curry and sausages. They also had a playlist of Christmas songs playing and it was just a highlight of my time in Italy.

New places… This year I’ve been to several new places that I’ve only ever dreamed of going to, as well as places I’d never even heard of. I went to Venice and Verona, as well as Milan and Rimini in Italy. In Switzerland, I’ve been to Lausanne and Zurich, and also into France to Chamonix and the Aiguille du Midi which was wonderful.

Open mind… Before going on my year abroad, I had no idea what to expect and whilst it was hard not to forge ideal situations and outcomes in my head, I went with an open mind and I think that’s important because anything could happen.

Palexpo… Palexpo is a huge arena in Geneva, close to Geneva airport. At the end of April, they had a huge book fair going on there. I went along because it was free entry for under 26s and it felt as though I was in heaven. I love books and there were so many books. I spent too much money on several books but I don’t regret it. Unfortunately I went on the last day it was open because had I found out about it sooner, I’d have gone every day.

Queueing… I don’t mind queueing, but the rest of Europe seem to hate standing in a queue and they often try to push in front of people. This is just an interesting observation I’ve had this year.

Restaurant Les Armures… This is a cosy restaurant located in Geneva’s old town and they do really lovely fondues. I went here with my Mum in April and we had a cheese and mushroom fondue. I’d never really been a fan of cheese fondues before then but it was delicious and I’d recommend the restaurant too.

Studying… Of course, studying is what I came to do on my year abroad.

Translations… I’ve had to do a lot of translations for University during my year abroad, and I think my translation skills have improved. I’d also like to be a translator when I finish University.

United Nations… In Geneva, I’ve been on a tour of the United Nations building which was very inspiring. Maybe one day, I’ll work at the UN as a translator or an interpreter.

Verona… Since studying Romeo and Juliet in GCSE English, I’ve always wanted to visit Verona and it was one of the first places I went to in Italy. I enjoyed visiting Verona, especially seeing Juliet’s balcony.

Writer… The year abroad has inspired me as a writer and I’ve written a blog and started writing a fiction piece based on studying and living abroad.

Xciting… There have been many exciting moments of my year abroad and I will treasure the memories forever. The best memories are visiting Verona and Venice, as well as seeing Il Divo in Zurich and going to Chamonix in France.

Yay… Yay that I’ve done a year abroad and yay that I’m going home soon. Even though it’s been a good experience, I’m always happy to go home.

Zurich… I’ve saved the best until last. The absolute highlight of my year abroad was travelling to Zurich to see my favourite band Il Divo perform live. It really was incredible and a fantastic way to end my year abroad.