Home Articles A Day in the Life: Studying for a Masters in Germany
Share
Tweet
Write for us 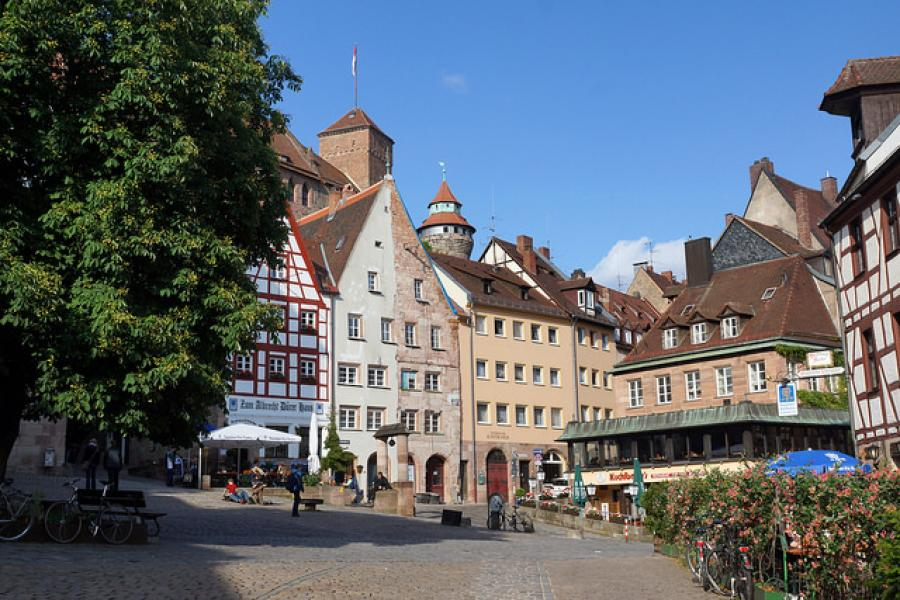 This article was written by Melissa Schmidt, published on 5th May 2015 and has been read 3101 times.

Melissa Schmidt is a Masters student at Friedrich-Alexander Universität Erlangen-Nürnberg, on a program called "The Americas/Las Américas". The program focuses on the cultures, languages, and histories of both North and South American countries. Here's a day in her life...

It's my first day of graduate school and aside from the thrill and blinding perplexity, the context that surrounds me is dripping with contextual and cultural irony.

"Uh, Nuyoricans sind die Leute von New York und Puerto Rico, oder?" was my response to the question of who knew what the term "Nuyorican" meant. I get a swift "ja, genau" as approval for the answer I gave. At this point, I had been sitting for an hour in my third class of my second day as a graduate student, and in my first course ever taught in a language I hardly understand. My answer was grossly incomplete, but it was the best I could do considering my, at the time, extremely limited capacity in German, forget about participating in scholarly lectures.

I strained to capture what was being said. I gathered the professor was addressing planned lessons, term assignments, exam dates, and what classes needed to be taken this semester in order to fulfil the requirements for the Masters program. Important stuff. I felt as though I were snatching out of the air any word or phrase I recognised as they left his mouth, and scrambling to put together some enlightening, million-piece-jigsaw puzzle on the desk in front of me.

"Tengo que matricularme en todos los cursos en este mismo semestre?!" I asked a Mexican student in the same program, regarding the extensive list of required courses in front of me. As she slipped the paper back between pages of the book in her arms, she assured me that was correct. I expressed my concern for having to take a class taught in German. Her response to that was she is taking courses in English, which according to her, wasn't her strongest language. Then turning to her friend, she resumed speaking German and left the room.

I study Inter-American Studies at the Masters level in Germany. The fascinating part about studying a foreign subject in a foreign country are the infinite combinations of intercultural and multi-lingual interaction that go on daily, even hourly. I change languages as I go from class to class about four times a day. In an environment dripping with international influence, I often find myself in conversations using a combination of three, sometimes four, languages at once depending on each participant’s abilities. There are about 15 or so students also in their first year of the program from various parts of the world. Between the some-odd dozen of us, we represent a total of six different nationalities. We communicate mostly in English, German, or Spanish depending on the language of the class we happen to be in or many other factors. Depending on one's mood, someone may decide to remain in the comfort zone of their native tongue, or venture to exercise their second and third language skills. Often, two or three languages are spoken all at once. Though, much to my advantage and personal preference, English is usually the “last resort” for everyone, native and non-native speakers alike.

I entered the room where my North American Culture Studies class was with a cocky air about me. It was taught in English and about, well, North America. I had a leg up on everyone there with the exception of the other U.S./Canadian/Mexican students, and even so the playing field was even. I had this, or so I thought. The professor introduces herself, and begins the class by showing a Powerpoint slide with the logo for the American Studies department. Staggered on the stripes of an American flag header, were images of famous people from throughout the histories of the North American countries. She asked if we could name them. Pff, piece of Apfel-Streusel. I examined each image closely. Boom, easy. Christopher Columbus. Then...uh...and the other five? Shit.

"Who can name any of these people?" I refused to be the one to point out Columbus, as that was a giveaway. "What about this woman?" she asked, pointing to an African American woman in early-20th century clothing. Billie Holiday, maybe. "Zora Neale Hurston", someone called out without a trace of an accent. "And this person?" pointing to a bearded man in a button down white shirt, I thought it could be a president. "Walt Whitman". Fuck. Pocahontas. Margaret Atwood. John Wayne. I hadn't the faintest idea of the identities of these people. With Margaret, Zora, and Walt I could have gotten away safely, my ego relatively unscathed, by using the logic that being well read in their works doesn't mean you can identify their faces. Sadly, that wasn't the case.

4. Learning Process to be continued

This disillusion I had about being able to excel in the course depending solely on what the cover of my passport says was completely, utterly, head-against-desk-banging-ly wrong. I have always openly denounced the stereotype that the United States is plagued with both ignorance and arrogance when it comes to looking outward to other cultures, religions, and languages. Surely it's true in some cases, and that the impression we give to the rest of world is only, unfortunately from a loud and boisterous minority. Yet, here I was doing just that. Albeit, on a far more innocuous level and, fortunately, I had the sense to recognise and correct it, keeping my trap shut in the meantime.

The lessons to be learned living in foreign countries are unavoidable, perpetual, and often humbling. However, they play an essential role in one's development of global perspective and cultural sensitivity. This one was learned quietly, played out on the stage of my own inner thoughts, but no less humbling and not to be soon forgotten.

by Laura Bridgestock
Living and working in Germany

by Helen Parkinson
Living and working in Germany