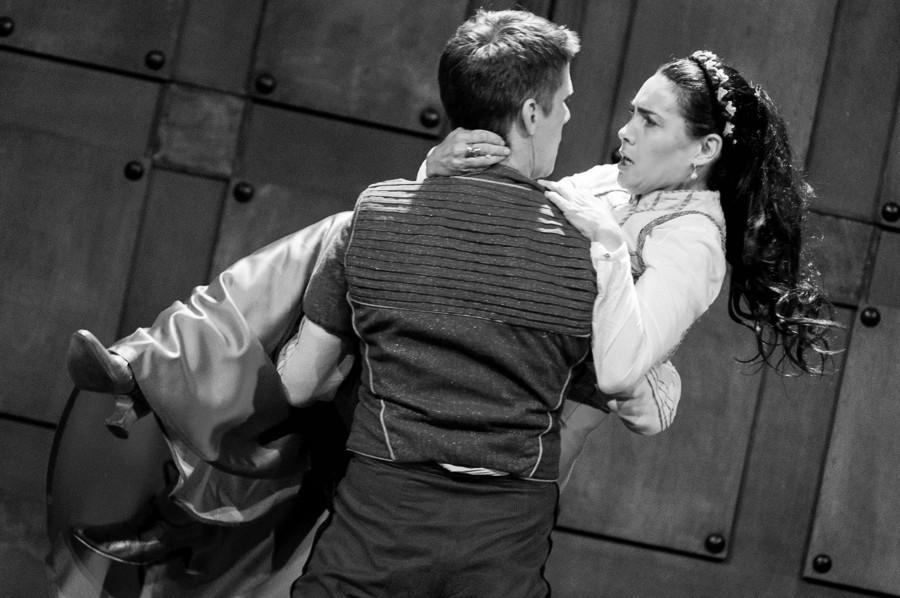 This article was written by Global Graduates, published on 10th September 2014 and has been read 3491 times.

UK Spanish Translation Languages
I recently went to see a production of the Golden Age play ‘Castigo sin venganza’ (or ‘Punishment without revenge’), performed at Shakespeare’s Globe by the renowned Spanish theatre company Fundación Siglo de Oro (or Rakata). The production was in Castilian Spanish with scene synopses in English, but as I was sat in an area with restricted view, I was forced to rely on my (embarrassingly rusty) Spanish to understand the goings on.

Although I had hastily googled a synopsis of Lope de Vega’s play before leaving for the theatre, I needn’t have bothered. Language skills aside, the physicality of the actors made the plot crystal clear. In fact, on the occasions when I tried to catch a glimpse of the English surtitles, the broken phrasing actually confused, rather than clarified my understanding. After all, it’s much easier find the humour in someone’s ridiculous facial expression than in a line of text informing you that ‘Batín is making a joke’.

The production was great - incest and murder aside - but as the evening drew to a close, I found my attention being drawn away from the actors’ brooding speeches, towards the captivated faces of the audience. I had a hunch that the Globe was playing host almost exclusively to a large chunk of the Hispanophone population of London. In the crowded foyer beforehand, the only English I had heard had come from the mouth of an usher. After many a spontaneous cry of ‘¡Ay!’ during the most impassioned moments of the production and a ten minute encore (only Europeans would greet the sixth bow with the same enthusiasm as the first), my suspicions were confirmed. The audience consisted almost entirely of Spanish speakers. The atmosphere was so overwhelmingly Latin that my friend and I unconsciously reverted back to our year abroad ways, speaking in Spanish to each other until we had left the crowds behind and were wandering along the South Bank.

‘A Spanish crowd at a Spanish play?’, you might cry, ‘Surely not!’. But hold your horses, lower that eyebrow and sheathe your sarcasm. It wasn’t that I was surprised by the Hispanic turn-out, but that I couldn’t help but compare the evening to an experience I had had towards the end of my year abroad in Madrid. I went to see Propeller Theatre’s all-male productions of ‘Twelfth Night’ and ‘The Taming of the Shrew’ - about 6 hours of Shakespeare in all. The theatre was completely packed (I believe that both shows had a full house, or very close to it), but the notable thing was that the vast majority of the audience were not expats, but Spaniards. Yes, there were Spanish surtitles, but these locals were so enthusiastic about Shakespeare, so excited to see some high quality drama, and so completely invested in the production - laughing at the jokes, silent during the emotional climaxes - that I believe they would have turned up even without the translation. What’s more, I noticed that the majority of the audience stayed to watch both productions. That’s not only 6 hours of challenging drama, but 6 hours of challenging drama in another language.

The contrast between these two experiences speaks volumes about our issues with language learning in the UK. I was amazed to discover that this production of ‘Castigo sin venganza’ is the Globe’s first staging of a Spanish Golden Age play - remarkable when you consider Spain and Britain’s incredibly rich and mutually influential artistic history, particularly from around the 16th century.

The Globe itself seems to be painfully aware of the British tendency to avoid experiences that take them out of their linguistic comfort zone. This is indicated by the ticket page on the theatre website, which features a snippet from The Times’ review of the production, informing readers that ‘Captioned scene synopses in English ensure that non-Spanish speakers have no difficulty in following the action’. Clearly, someone in The Globe’s marketing team decided that it was more important to reassure than to inspire potential audiences.

The play has received 4* reviews and elsewhere in the same review, merits the heady description that the actors’ chemistry ‘turns even the most torrential rain to steam’. So what’s stopping us from flocking to see it?

The British attitude to languages, that’s what. Whilst on the continent, the prevalence of Anglophone culture means that people don’t think twice about queuing to see screenings of Hollywood films in their original language, the lack of high profile, non-English culture on our screens means that we would prefer to stay in then to sit through an evening of subtitles.

Of course, I don’t want to set up a straightforward dichotomy. After all, the very nature of Third Year Abroad testifies to the fact that there are many positive examples of cultural immersion and language learning in the UK! As year abroaders, we are aware that engaging with the culture of a particular country is one of the easiest and most enjoyable ways to practice a new language. Yet, fear of the unknown leads a large chunk of the UK’s population to avoid the global cultural opportunities on their doorstep, creating a vicious cycle where a lack of exposure to different languages exacerbates the reluctance to engage with them.

How do we fix it? Well, in some ways, we’re already halfway there.

The only way to break the cycle of fear is to increase global awareness by saturating the British cultural scene with foreign imports - something that the Arts are becoming increasingly better at doing. The Globe’s remarkable ‘Globe to Globe’ tour, for example, is bringing a production of ‘Hamlet’ to every country in the world in time for the 400th anniversary of Shakespeare’s death. Yet, we need to put as much consistent energy into bringing world culture into the UK as we do into sending our own culture out into the world.

But what about the non-theatre goers? Strangely, the solution seems to be bleeding into our culture from an unusual source: Scandinavian television. Shows like ‘The Killing’, ‘Borgen’ and ‘The Bridge’ have snuck into the British mainstream with their pessimism and dry humour, reminding us of a far more attractive version of ourselves and absorbing us so completely that we hardly notice that the characters aren’t speaking English. The shows have been so successful that they have given rise to a new genre: Nordic Noir. What’s even more encouraging is that these shows seem gradually to be eroding broadcasters’ fear of non-English drama and paving the way for other subtitled dramas to sneak onto our screens: Spain’s period drama ‘Grand Hotel’ turned up on Sky Arts, Israel's ‘Hatufim’ provided the inspiration for ‘Homeland’ and Channel 4 put French zombie drama ‘The Returned’ in a primetime slot. The tide seems to have turned for global television.

As more and more subtitled dramas, overseas theatre companies and art house films filter into the public consciousness, you can’t help but feel that language skills are about to have a moment. The ‘cult’ status of subtitled shows is starting to turn a love of foreign culture from pretentious to desirable to essential. Languages are beginning to regain their mainstream ‘cool’ factor. After all, who wants to be straining to read the surtitles when you could be laughing at the joke?

How do you find language-themed activities in the UK?

My university has a group called the 'Language Cafe' where ERASMUS students doing their year abroad in the UK, language students and anyone else come along to practice their languages. You could try s...